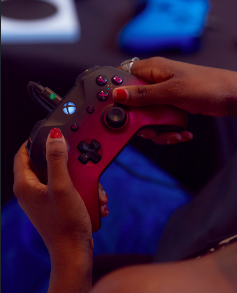 It might come as no surprise that Black female gamers are under-represented in the professional gaming community.

This goes beyond people playing online slots or mobile games. Reports have shown that only 27% of the professional gaming community is female. Furthermore, only 1% of the entire community identifies as African or African American. These numbers show that Black women are up against the odds because of both their ethnicity and their gender. In an industry that makes $135 billion, that is just unacceptable. But things are beginning to change

Black women have noticed the lack of representation in the global professional gaming industry and are beginning to do something about it. They are building a network of organizations unlike ever before. These are designed to encourage, help and support Black female gamers in training and facilitating them into the industry.

Organizations such as Thumbstick Mafia and Brown Girl Gamer, formed in 2015 and 2017 respectively, have united women in popular forums and streaming channels. These organizations and communities have been built from the idea of isolated efforts. Such communities started as communities for women, but soon came to realize the lack of diversity in the gaming industry and placed a heavy focus on changing that fact.

Black female gamers have always existed. But it is now we are starting to see a shift in the gaming industry as they begin to carve themselves a well-earnt spot. These organizations plan and execute amazing projects to encourage more marginalized sectors to speak out and make their voices heard. But they are also doing more. They are helping women train as developers, to create and develop more mainstream games and solidify their place within an ever-growing industry. These games are currently simple, but these girls have ambition and the games won’t stay that way for long. They hope to develop games that will be taken seriously and eventually prove that women of color deserve their spot in the industry.

Carving a new path for the next generation is no easy task, and women around the globe are being faced with problems that stop them from reaching their goal. Twitch, the most common online streaming platform, shutdown the ‘communities’ section last summer, with the excuse: they are not used. However, communities such as Black Girl Gamer and Cookout were used frequently as places were women and people of color could gather. The section has been replaced by a hashtag grouping system, and this doesn’t allow for filtering unwelcomed gamers. Black female gamers are seeing racist and sexist comments from the moment they log in.

Waiting 40 years for something to change is not an option for these women. Some pioneers of the movement are beginning to look into augmented and virtual reality, a form of gaming that as been labeled ‘the future of gaming’. The whole Black female community is moving towards change, and it is time they took the spot they deserve.