One form of small screen black excellence coming mid-season 2018 is Black Lightning! Helmed by the creative powerhouse duo Mara Brock Akil & Salim Akil, they have just made a major move by adding GRAMMY Award winning singer, Jill Scott (Fringe, Being Mary Jane, Steel Magnolias, Why did I get Married?) to the cast as Lady Eve! Lady Eve is a unique DC villain masking as the owner of a funeral parlor, with sure to be a plethora of evil schemes up her sleeves. I had the pleasure of talking to the first black superhero family at this year’s San Diego Comic Con, about the unique narrative they will portray come mid-season on the CW.

Speaking on the show’s social relevance, China Anne McClain (Jennifer Pierce aka Lightning) said: “There’s actually a scene that we shot just for the presentation to where we are driving coming home from something and our father gets pulled over by the cops. He’s taken out of the car and slammed up against the car in the pouring rain. He didn’t do anything and so at this age, we can really only watch because this happens to our parents and we’re just like this is wrong, but we don’t know what to do and we feel so helpless. In that scene, I think that it really shows we don’t know what to do. Our dad (Cress Williams as Black Lightning) is just like chill out, everything is going to be ok, because we can’t make any dumb decisions in those kinds of moments. We deal with some very real stuff in this show and some very realistic issues. And that’s another part that I think is going to resonate not just with African Americans, but everybody.”

It’s this type of gun and gang violence that fuels Jefferson Pierce to get back into the crime fighting business. Now with Jill Scott portraying Lady Eve, I am more than elated to learn more of her secrets and find out how deep into this life of crime she truly is. If the comics serve as any guidance in this adaptation and version of Lady Eve, it could mean that we get to see the Outsiders on Black Lightning sooner than later, since they were instrumental in one iteration of the comics in stopping Lady Eve. Guess, we will have to watch mid-season 2018 on the CW to find out! 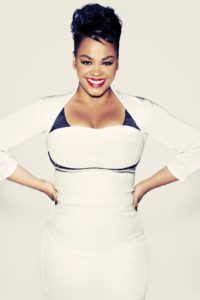 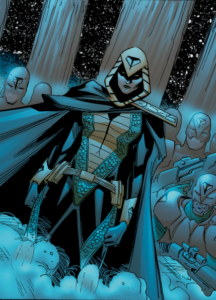 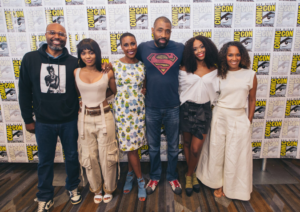