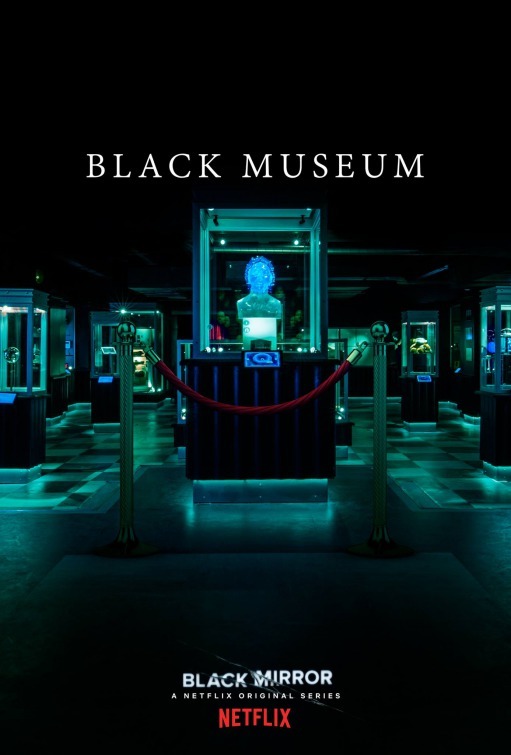 Recently I watched the now infamous episode “Black Museum” from season four of Netflix’s popular sci-fi series Black Mirror, and while the commentary on racism in the American judicial and penitentiary system was quite clear to many of us — especially Black people — one thing kept jumping out at me, the potential consequences of a Black man literally sharing his mind with his white wife.

Now, I know you might be saying, “Why do I have to attach race to this particular plot point?” or “She was his wife, he didn’t consider her race when making the decision, why should you?” Here’s the thing, what I saw was a Black man, literally give up not only part of his consciousness to his white wife, he gave her more space (so to speak) than he himself ‘utilized’, 60% to be exact. Just to give you a summary of what led up to this, let me give you a little backstory.

Jack, played by Aldis Hodge, is approached by a sales rep in the hospital where Jack’s wife Carrie (Alexandra Roach) lays in a coma following an accident. The salesman introduces himself as Rolo Haynes, played to creepy perfection by Douglas Hodge. He tells Jack that his company is testing new a new experimental “neuro-technology” that would transfer Carrie’s consciousness into Jack’s mind. He explains that humans only actively use 40% of our brains, leaving the rest vacant, and that vacant space is where Carrie’s consciousness would be transferred.

Jack agrees and goes through with the procedure. It’s a success. Carrie can actually speak to Jack and through him communicate with their young son Parker (Kyros McGee). She can now see, hear and feel everything Jack can, and I mean everything.

After an initial adjustment period, Jack and Carrie seemed to have settled into their new and awkward situation, all was right in their shared world. Carrie would ask Jack to hug Parker, tell him “I love you” for her, read stories etc., you get the picture. But eventually, as the old adage goes, ‘all good things must come to an end’, and so it inevitably did for Jack and Carrie.

As the story progressed, I began to think about the idea of a Black man sharing his mind, his consciousness and to some extent his very identity with his white wife. I thought about possible interactions he would have not only as a man, but a person of color. Would Carrie’s ability to experience what Jack did give her a unique perspective on the life of a Black person, or would she completely overlook it because it wasn’t her concern?

I found it interesting that she failed to adhere to the boundaries Jack set and she agreed to, her unwillingness to accept his need to move on romantically. She voiced her disgust with him for looking at women and a host of other things Jack did or said. Carrie became that constant, loud voice in Jack’s head; she was no longer content with being a passenger, she demanded more and even complained about him wanting Parker to spend time with Jack’s new girlfriend. To regain some semblance of mental peace Jack obtained an app that allowed him to literally put her “on pause,” blocking her from having active access to his life.

Eventually, Jack opted to have Carrie’s consciousness removed from him and placed into a toy monkey (the symbolism of that is a whole other discussion), that overtime is ignored by the family and ends up enshrined in Rolo’s museum of the macabre.

Throughout the series, we’ve seen various characters use technology as a way for others to experience their lives, such as in “The History of You” where a memory implant was used to display visual memories. In “Playtest” a man volunteers to have a viral gaming system implanted into his brain and ended up literally loses his mind, and in “San Junipero” elderly patients literally give their consciousness to a massive computer data bank, where they could live on in eternal youth, once their bodies could no longer carry on.

Black Mirror is known for not shying away from storylines that make us cringe or imagery that will literally make you feel like throwing up and turning away from the screen. So it came as a surprise to me when the certain aspects of Jack’s life were not explored such as racism.

To me, the opportunity of having a white person with a literal front row seat to the realities of what being a Black man is like was squandered, especially when compared to what happens in the third act of “Black Museum.” There was no apparent hesitation to show how sadistic humans can be when given the opportunity to torture another person, especially for racists and racists with money, so why not have Carrie see what it’s like for a Black man raising his biracial son in a society where prejudice against them exists?

To make such bold commentary on one aspect of racism, and completely glide past it in the same episode is a bit disconcerting, but then again this also happened in “USS Callister”. Michaela Cole’s character Shania sacrificed herself by throwing her body in front of her white female crew-mate Nanette to save her from punishment, after Michaela and others repeatedly warned Nanette against the dangers of disobeying their captor. Even though Shania didn’t die, the imagery of a Black woman standing in front of a white woman, begging her white male captor for leniency was all too familiar to me, not to mention the message of said white woman being placed in the position of leadership even though she was the last to arrive and nearly got the crew killed.

What makes Black Mirror such an interesting — and in my opinion, an important show — is that it doesn’t shy away from the tough discussions about technology, society’s penchant for relying on it too much, and our willingness to, in some cases, give total control over to it. Throughout the seasons, we’ve seen the downfall of giving not only our bodies over to technology but also our minds and thereby our very identities.

“Black Museum” showed me that it’s not just our physical bodies that truly define who we are as human beings, but our consciousness, our souls that need to be protected, because once that is sacrificed, there is the possibility of never getting it back. Jack came close to losing his mind. He didn’t fully consider the consequences of what sharing that part of himself with another human being would mean, especially one that failed to respect who he was as a person with agency. If the option to have Carrie removed wasn’t available, he may have been responsible for carrying a white woman in his brain for the rest of his life.