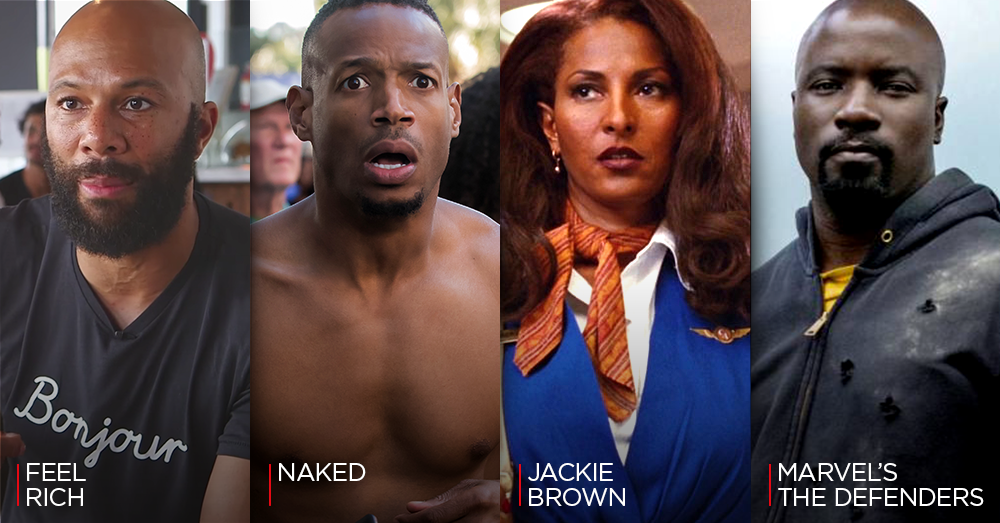 It’s time for a new month on Netflix and you know what that means:

Wait, that’s not quite right. Anyway, our sarcastic, bold, daring Netflix heroes are finally, FINALLY teaming up! The Defenders, the latest of the Marvel TV super-shows is coming to Netflix August 18th. Check out our post-SDCC thoughts here and be sure to tune in to what are sure to be epic live tweets!

Before that, at the top of the month, Samuel L. Jackson assuredly yells some stuff at us in Jackie Brown (starring the amazing Pam Grier) on August 1st.

Marlon Wayans is making his way back into our lives on August 11th — but this time with no clothes on. Marlon, Regina Hall and Loretta Divine star in Naked, about a guy who repeats the same day — his wedding day — over and over, but nekkid. Yikes. (Marlon also has a TV show coming to NBC on August 16 — so it really is Wayans Week!)

At the end of the month (August 23rd), Netflix schools us on healthy eating in the hood with Feel Rich: Health is the New Wealth, a documentary narrated by Quincy Jones III. It features interviews with stars like Common, Russell Simmons, The Game, Jermaine Dupri, and more who discuss health in the hip-hop community.

Other titles of note in the month of August? Remember Zero from Holes? He’s hot now — even with big ears, but you can flashback to your teen crush when Holes drops on Netflix August 5. Also: The Addams Family (Aug 1).