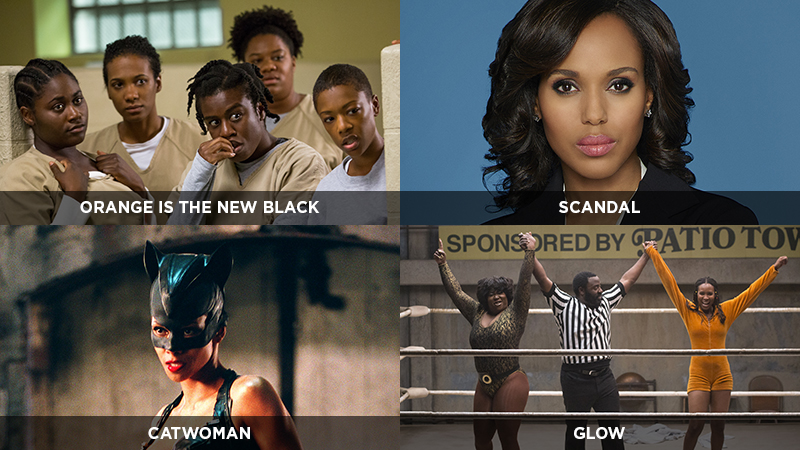 Catwoman. If anything, you can just watch for Halle Berry and the catsuit. But tell us, does a rewatch redeem this 2004 anti-villain outing? At all? Bueller?

The Bucket List. Remember that movie where Morgan Freeman and Jack Nicholson do crazy things because they’re gonna die? No? Now’s your chance to watch God and the Joker do some weird and crazy stuff.

Orange is the New Black is back. The season 4 finale left everyone a bit traumatized, but the new season is getting creative with its storytelling — the entire season takes place in 3 days — and many of your favorite ladies return. Just, sadly, not that one. If you’ve dodged spoilers, you only have a little more time before you can binge it all.

Daughters of the Dust. This one sounds like a BGN Netflix Live Tweet To Be! Julie Dash’s 1991 indie drama about a Black family at the turn of the 20th Century will come to Netflix in the middle of this month. It was the first film by a Black woman to be distributed theatrically in the US and it can finally be streamed. Everyone should watch this film, but especially if you’re a Black woman film buff or aspiring filmmaker.

Scandal Season 6. If you couldn’t keep up with Scandal during it’s tense and dramatic latest season, you can already catch up on Netflix. The latest season of Scandal deals with the fallout of the November election and the assassination of the president-elect. Mama Pope delivers one badass monologue to cap the season.

Moana. Maui and Moana are here!! YOU’RE WELCOME! Friend of the Site, Lin-Manuel Miranda (we can officially say that now) composed the music for this beautiful story of a girl going on a journey to save her island. The story is wonderful, the songs are super fun, and the Rock can actually sing y’all. Young or old, definitely consider watching Moana when it drops on Netflix this month.

GLOW: Season 1 is one of Netflix’s latest Originals. Picture it: the 80s. Down and our actresses. The boom of the professional wrestling circuit. And the rise of female wrestlers. GLOW (Gorgeous Ladies of Wrestling) stars Alison Brie and a few up and coming Black and Latina actresses, Kia Stevens, Sydelle Noel and Britney Young. If people pounding the crap out of each other for sport is your thing, your thing is here June 23.