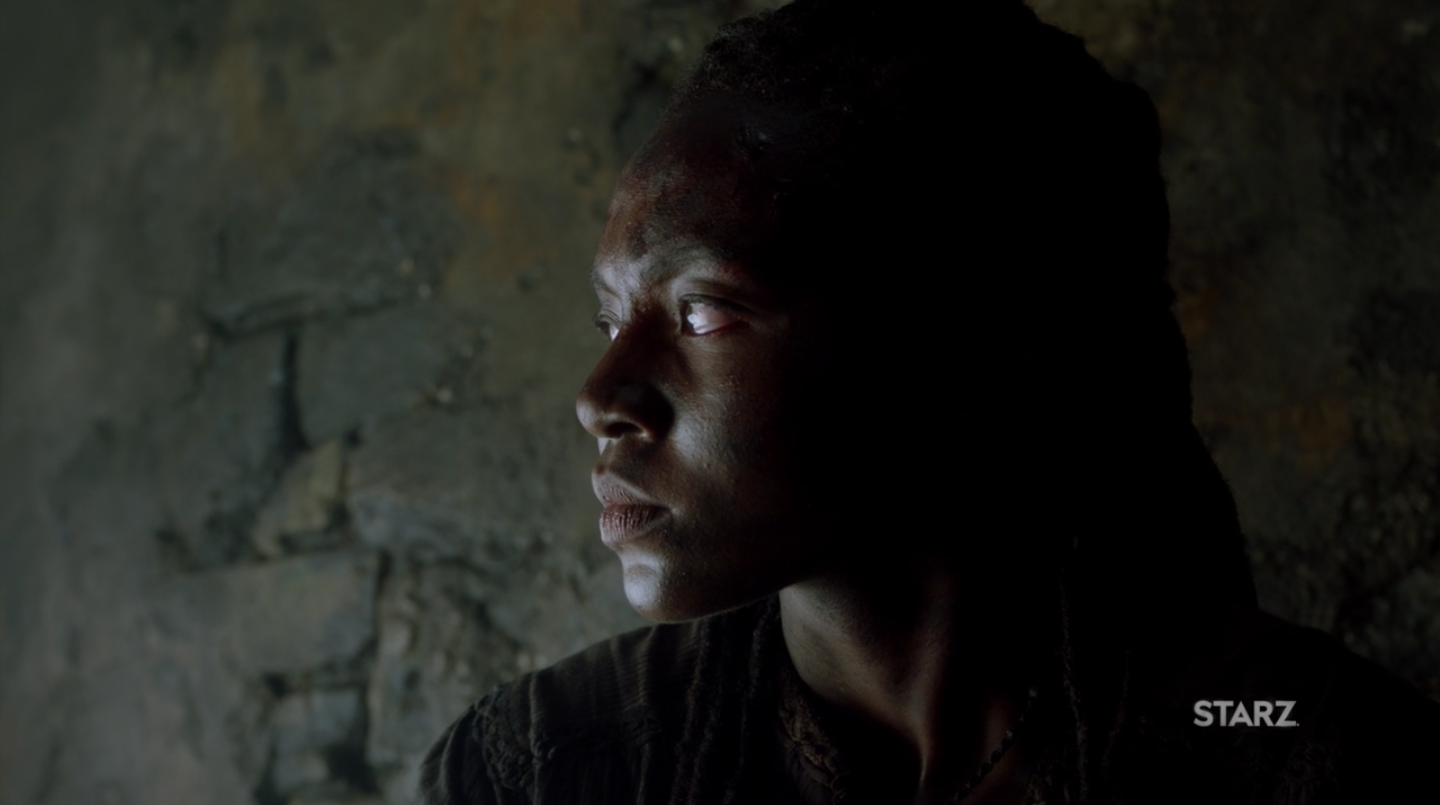 Previously on Black Sails: the wicked witch is dead and Silver is a sad panda.

The Queen and Silver are mourning Madi and we see them both take solace in Madi’s room. We find the Queen there first, touching one of Madi’s bracelets and Silver finally gets to confess that he loved Madi and cared for her a great deal.

In a meeting, Flint tells everyone that he plans to free slaves in Barbados so they can take Boston. Yes, Boston. It’s a ridiculous plan and Julius foreshadows by saying that their enemy just has to turn them against each other for their plans to all fall apart. Silver asks why Julius is even there (he’s all in his feels now) and that Julius can just leave.

We later see Silver sitting among Madi’s books, looking like a kicked dog. He says that they have to continue the war otherwise Madi died for nothing. Flint tries to comfort him and bring him back to the present, but I know exactly what Flint is trying to do. He tells Silver he has to trust him which we all know means let Flint manipulate his grief into serving him.

Julius gets word that Madi’s alive (totally called it) and Silver is ecstatic. He immediately starts coming up with a plan to go get her, but the Queen and Flint stomp on his heart. The Queen tells him that they can’t give Rogers the cache without hurting their cause and Flint backs her up by saying they either pay the ransom or have their war. Silver ain’t having it. He asks Flint point blank if the war is more important than Madi’s life and he says yes. Flint quickly turns it around and promises they’ll find a way to bring her home without giving up the cache. Flint says when we are of the right mind there is nothing they can’t do which is what Silver said in the first episode.

Silver doesn’t believe that anymore because Hands notes later that Flint seems confident about rescuing Madi without paying the ransom. Silver says he’s confident too, but Hands is certain that one of them seems more confident than the other. We find out that Silver took the treasure and has it hidden on the boat because he is going to get his lady back no matter what. When Flint finds out he will flip and Silver is ready to do what must be done. I guess their friendship is over and Silver no longer trusts Flint.

Rackham has arrived in Philadelphia. He is not having it though because it’s freezing and snowing. Rackham sends Featherstone to find a surgeon for Anne and Rackham goes to talk to Eleanor’s grandpa.

Rackham introduces himself to Guthrie and the men do a double take. He tells Guthrie that Eleanor is dead and Rogers brought the Spanish to quell the resistance killing Eleanor in the process though he forgets to mention that they were married. He says they can jail Rogers and buy Nassau for really cheap. Guthrie says no.

Rackham walks out in a daze. An old woman stops him to ask if Eleanor is really dead and she says she’s Grandma Guthrie or GG for short. She tells Rackham to wait outside.

Rackham follows GG as she says the men in there are all about image and that her husband was not going to agree with it in front of them, but that the opportunity was too promising to be passed up. Rackham realizes that Grandma Guthrie is really in charge of the business.

Rackham tells Max that GG is interested and that Max should go with him as GG may favor a woman in control. They visit her later and Rackham tries to talk Max up, but GG knows what he’s doing. GG tells a story about her son feeding a tomcat and her husband beating the son for feeding it and the son would feed it again and it went on and on and on because they never changed. She says Nassau is like that: never ending violence.

GG has her bookkeeper check over Max’s finances and he asks if she has any slaves in her employ. Max says no and he is astounded. He notes there’s a lot of manual labor she has done and he’s like but you live in the Bahamas and can have slaves do the work for free. Max says she was a slave and she wouldn’t be a slave again or a master. GG is impressed and asks how will they break the cycle, Max says they have to drown the cat.

GG agrees with everything except she has two caveats because of course. She wants Flint dead and that Rackham has to do it. Rackham laments how hard it will be because Anne isn’t well enough to do his dirty work for him.

Rogers is sitting staring off into space because he’s sad and I don’t care. Ms. Hudson comes in because he wanted her to see him, but he ignores her because he’s a dick. Ms. Hudson tells him that what Eleanor did was out of concern for him. Rogers talked to the governor of Spain and he had written off the cache and that he had never asked for Rackham (from back in season 3 which is really why Rogers lost the cache in the first place). He asks if she did it and she says yes. Rogers then starts blaming Ms. Hudson for Eleanor’s actions saying that she would never turn the guns on him and that it must have been Ms. Hudson that told her to do it. We already knew that Rogers didn’t really know Eleanor, but this really cements it. She showed him the facade he wanted so she could survive.

The funeral director finished dressing the body and he goes to tell Rogers that Eleanor was preggers, but Ms. Hudson is like NoOO. She does not want to die. Rogers asks how long Eleanor knew about it the pregnancy and Ms. Hudson doesn’t think for long. Eleanor rarely included Ms. Hudson into her thinking and that she really observed her actions to understand her which is how she knew Eleanor did everything because she loved Rogers. I still don’t buy it.

A guy comes in because they have a pirate leader and he wants to make a deal. It’s god damn Billy Bones coming to ruin everything.

Billy tells Rogers that he is Long John Silver, that he built everything and he razed all sorts of stuff which is all true. He’s telling Rogers this so that he can see that he is telling the truth. Billy doesn’t care about the cause or Nassau anymore. He only wants one thing: for everyone to pay because they abandoned him. They have to divide Silver and Flint which is now easy because they had Madi this whole time, locked up with a bunch of slaves they captured.

Rogers goes to see Madi and he asks about her being with Eleanor when she died. Rogers asks if Eleanor died fighting. Madi doesn’t answer so he pulls out a list of terms. He says all of the slaves on the island will be emancipated with one caveat. That afterwards any runaway slave will be returned to the law and all aid to the pirates will cease. Madi scoffs at this horrible deal and Rogers shows how civilized he is by saying that every man, woman, and child will be enslaved again and he’ll burn their island to the ground. He goes to leave and Madi says Eleanor died fighting and so will she because she’s a boss.