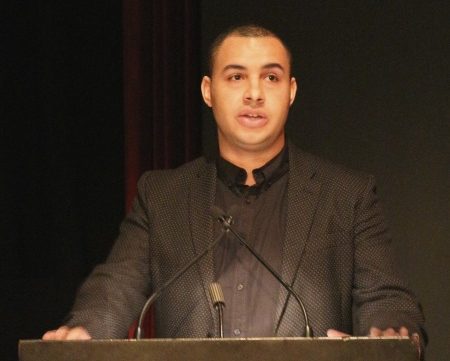 Black Star is a film series curated by Ashley Clark, the senior programmer of cinema at the Brooklyn Academy of Music (BAM). The retrospective has been previously hosted at the MoMA, the British Film Institute in London, and now he has brought Black Star to TIFF in Toronto.

Just before the series started I had the opportunity to speak with Ashley about Black Star and what these films mean to Black cinematic history and Black society as a whole.

BGN – Ashley before we discuss the retrospective can you tell me a little bit about yourself?

AC- I am originally from London, England, I currently work as the Senior Programmer of Cinema at BAM (Brooklyn Academy of Music), which is a large performing arts venue, and I work in the cinema department. I’ve worked for many years as a freelance film critic, broadcast journalist, and film programmer. Black Star which is happening at TIFF this week is this iteration of the program, following it’s debut at the British Film Institute in London, in October of 2016. A version called “Making Faces on Film” was(shown) at MoMA in New York, in April of this year.

BGN – What was it that interested you to become involved in film and the industry in general?

AC – I’ll tell you something I don’t normally tell people, when I was twelve years old I actually appeared in a film called Cleopatra, it was the TV-movie version of the old Cleopatra story, directed by a guy called Frank Roddam. It starred Timothy Dalton and Billy Zane, at that point I had always been interested in film and always enjoyed it, but it wasn’t a big deal for me and I had always done a little bit of acting here and there on stage. But it was this experience that really got me interested in the behind the scenes aspect of it. It was then that I really started getting into film as a serious media, and I started to appreciate how much effort went into, I suppose, the very deliberate construction of fantasy. Nothing that was on the screen was accidental and that was really interesting to me.

After the film I decided I didn’t want to act again because I didn’t want to sit in a trailer for eight hours a day in a trailer, in the middle of the Sahara Desert in full makeup, that wasn’t my idea of fun at the time.  So I decided to pursue writing and kind of thinking more analytically about film, then a few years later I started to write film criticism. I started to blog just for fun and eventually I transmitted that into a more serious career as a writer, and trying to make money out of doing it. I became particularly interested in issues about representation.

Before I talked about how the act of making a film everything is deliberate, everything in the frame is on purpose.  I started to think about how people of color, Black people, people from my own historical heritage have been represented on screen, and I started to look more into it and more into criticism of that, and how that intercepted with the industrial history of film making in Hollywood and beyond. But also how it intercepted with politics and sociology and how representation was very, very important and as a British-Jamaican writer like Stuart Hall, who pioneered the thinking on race and representation in media, it was really important to me.

I think in a way that’s the line that goes from my early interest in film all the way up to Black Star, which really is founded upon investigating how specifically Black identity has been constructed very deliberately on screen, and also how it’s been challenged and subverted on screen by Black film makers, and stars themselves.

BGN – Like you, I’ve been focusing a lot on representation, and now that I’m an adult I’m more aware of the lack of representation that we had in the past, and the kind we have now. On Twitter we see people talking about representation, but I also say it’s more than representation, it’s about how we’re represented also. Perception is everything, how people perceive people of color in fiction is how they perceive us in reality. Growing up I watched a lot of British television shows on like PBS and BBC, and also American shows. When British shows featured characters with Caribbean accents, to me they always seemed authentic, whereas with North American programming, they were this cliched accent that was always Jamaican. That has always bothered me because Jamaica is not the entirety of the Caribbean.

AC – Jamaica is not the Caribbean, no, and we had shows like Desmond’s that was super important to me growing up, and that was actually one of the most important events for me in the London leg of Black Star I organized. We screened the first episode from 1989, and we had the creators Trix Worrell and three members of the original cast. We talked about precisely the kinds of things you’re talking about, why it is important to have three-dimensional representation, and how representation extends beyond simply what is on the screen. It’s who’s telling the story, who’s being empowered to comment upon and interpret the story. Something like BGN is great, when I was growing up I wish there was something like BGN around, just as there are many publications like gal-dem magazine in the UK.

If I had them growing up, I don’t think it would have been so difficult to feel like you could get your voice heard. Because as well as having a diverse and multifaceted representation, you also need a healthy critical discourse as well, you need to be able to have yourself and another Bajan critics disagreeing about the representation of a Bajan character, it can’t always just be one person. We need to foster healthy dialogue on screen and off it, and I think that’s really important, and I think that’s central to what I’m hoping to do with Black Star. I want people to be talking about it and arguing about what’s being shown, and how it’s being presented, because I think we all need to be in that dialogue and we need to spur each other on.

BGN – For this Black Star series at TIFF, the tag line is “Celebrating 100 years of Black excellence on Screen”, out of the hundreds of films that we have with Black people as leads, directors and working behind scenes, what made you choose these particular films? Looking through the list you cover a lot of genres from short films, to documentaries and feature length comedies, actions and thrillers.

AC – For me the key film in this program is a film called Ethnic Notions form 1986, directed by a guy called Marlon Riggs, sadly a late documentary film maker who passed away from AIDS at the age of just 37. This film Ethnic Notions, I see it as the center piece of the program in a way, because it is a teachable center to the program. It traces the deliberate construction and growth and development of particular anti-Black stereotypes in Hollywood, beginning with the early days of minstrelsy. Which was America’s first indigenous art form, even though America doesn’t quite shout about it, it was the first kind of authentic art form to grow up in America. That was white actors donning black face, to portray an authentic portrait of Black people. So this film Ethnic Notions really takes you through a history of how racist stereotypes have been deliberately encoded and manifested in Black representation in America cinema.

You have early films like Lime Kiln Club Field Day which is the first ever all Black cast film, and it was from 1913 and made outside of the Hollywood system, and it was never finished. It portrayed very loving and upbeat middle-class Black characters. It was never finished, but two years later a film called Birth of a Nation came out in 1915, and it was directed by a guy called E.W. Griffith, who made this incredibly racist epic set in civil war and reconstruction era America. It was screened at the White House and the president at this time Woodrow Wilson was a huge fan of this movie, and the film itself spurred massive membership of the Klu Klux Klan, which had dwindled in numbers before that. Because this film came out it reenergised the KKK, and it showed that film had a very political energy.

It set the tone for how Black people would be represented with a particular number of stereotypes like the brute, the savage, the trickster ad all of these films that are in the series that I put together, particularly the earlier films show either those stereotypes either being challenged within the roles themselves by actors who are to quote James Baldwin “smuggling reality into a script that isn’t there”, or subverting them. That’s why we have films like Set it Off, The Harder They Come, Carwash from the 70s, and films like Bush Mama by Haile Gerima, which Lydia Ogwang who’s a great writer based in Toronto is going to introduce.

These films take some of these stereotypes that were forged in the black-sploitation era and bat against them. We have films like In The Heat of the Night with Sidney Poitier, who in the 60s became the first real cross-over Black star, by which I mean the first Black star to really make a dent in a white industry. So all of the films that I’ve picked in some way have something to say about how important iconography is and how important it is to fight against stereotypes that have been established in Hollywood as a standard.

BGN – If you were to create mini list for a film series on the most influential Black films in the last ten years, what would you add?

AC – Well Get Out and Moonlight spring to mind immediately for how they have shaped the conversation and really created something special in the culture. I think the film Belle by Amma Asante is essential because of what it does with the period drama, which  traditionally a whites only space, and she said ‘no we’re going to do it differently’. I’d like to give a shout out to a film called Second Coming, by Debbie Tucker Green, which screened at TIFF in 2014, I think if it had an all white cast it would’ve won Oscars and BAFTAs, and Mudbound.

The other name I will give you is Terence Nance, he’s based here in Brooklyn, and I really want him to do a feature at some point, he did his first film called An Oversimplification of Her Beauty in 2012, and he’s done a bunch of short films, but I think we need a feature from him soon. We need funding, mentor-ship and opportunities to actually turn these ideas and shorts into feature films, so we can really impact the culture.

To learn more about Ashley and his work visit his site AshleyClark.net