Let’s catch up: the highly anticipated and/or contentious sequel Blade Runner 2049 releases October 6th, now with a brand new poster to show for it!

This will break the world. Here’s the new US poster for #BladeRunner2049. pic.twitter.com/iWnmv5pzbN

Burgeoning director du jour Denis Villeneuve helms this sequel, which counts a number of co-conspirators in its ranks, including original director Ridley Scott as executive producer, as well as screenwriter Hampton Fancher.

I have an intensely personal relationship to, and fondness for, the original Blade Runner, from its smoky, neon-blasted-noir backdrop, to its sparse but ruminative plot workings, to the weird intimacy of its performances. It’s a storied, iconic, evergreen film, dignified in its art design, and loaded with dark mysteries on both sides of the screen. As a kid, it was one of the first open-ended films I’d ever seen, and I’d be confident enough to say that I know the entire script by heart; to be fair, this is not a tremendous ask, as it runs significantly less than 6,000 words.

At least, in this generation of obligatory remakes, Blade Runner 2049 is a specifically stated sequel, with a story occurring 30 years after the original. Although he first emerged as a surprise inclusion in early trailers, Harrison Ford reprising his role of Rick Deckard is now positioned neck-and-neck with lead actor Ryan Gosling (keep in mind that this might be a mislead, as earlier reports indicated Ford’s screen-time as minimal). In addition, the colors in the poster—a sort of dusky amber and an icy teal—distinguish the four actors, almost color-coding them: Gosling, Jared Leto, and Ana de Armas are saturated in the former, Ford alone in the latter. Interestingly, this is in contrast to the posters released in May, which swapped these identifying colors for the two leads. 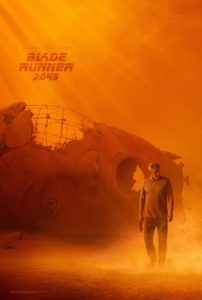 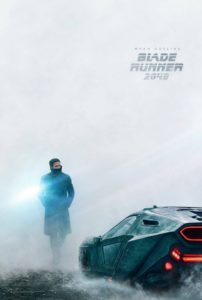 I’m tremendously excited for this film, though I expect a lot out of it. Villeneuve has had an incredible run as a director, and trailers imply that the crucial aesthetic qualities of the sci-fi classic have been effectively attempted, which speaks highly of Roger Deakins’ return as Villeneuve’s cinematographer. The question remains of how much of the film will take place in the steamy, buzzy streets and locked-down ziggurats of 2049 LA versus the wasteland-like environs where Deckard has apparently sequestered himself.

In a month and a half, most of our questions will be answered. For now, take another look at the most recent trailer: