I wasn’t born when the first Blade Runner came out in 1982, but it has been a staple film in my collection for many years. Thanks to Blade Runner, my science-fiction appetite has made me the movie fanatic I am today. So, it was my pleasure to attend the Blade Runner 2049 Press Conference in Los Angeles, California. Cast and crew were present to talk about the film. Everything was a bit hush hush as to not reveal any spoilers. Questions were strictly monitored making sure everyone present didn’t ruin the movie for audiences yet to experience the film. It was harder to do than you think but I’m glad they made such a big deal about it. I hate spoilers. 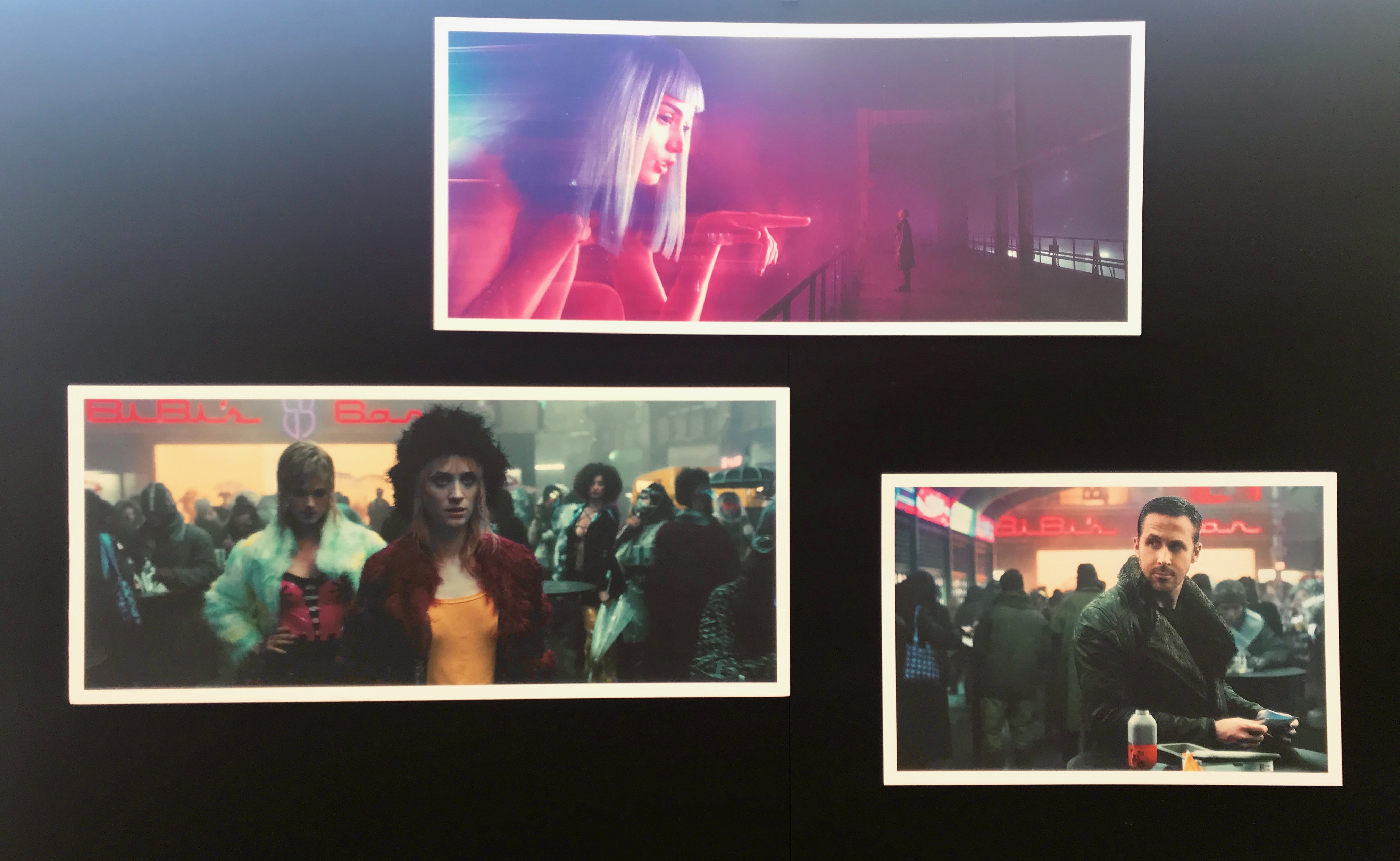 Blade Runner 2049 is the sequel to Ridley Scott’s 1982 timeless film. It hits theaters today, October 6, 2017. Harrison Ford plays the ex-cop turned Blade Runner Rick Deckard in the original film and reprises his role again in this follow up some 35 years later. During the press conference, Ford was asked if he had any vivid memories of filming the first Blade Runner. He said, “It was raining. I was tired. I was happy…A lot has happened since then but it was a remarkable experience working with Ridley [Scott] and the rest of the people involved, Hampton [Fancher]. But, it was a long time ago, in a world far far away.”

Gosh I love this guy. He goes on to say that he thinks about the original frequently because,

“I got reminded of how many filmmakers took inspiration from that film and how much it defined a certain kind of visual storytelling.”

The original film is such an iconic staple. I’m glad players from the original were crucial to Blade Runner 2049 being made. Director Denis Villeneuve (Arrival, Prisoners) said it was critical to have Ridley’s blessing. Villeneuve was asked how he got the blessing and how he know Ridley was more than on board with him doing this. Ford chimed in saying, “You usually know when Ridley is not happy.” Villeneuve agreed and went on to say,

“I needed to be in the same room as Ridley Scott and hear him say that it was okay for me to take the baton, be behind the wheel. It was simple, give me your blessing and if you don’t, I walk out and I never do the movie. For me there is no in-between. It’s either ok with you or If it’s not, I’ll be at peace with that and I’ll walk away.”

This is how you know a sequel will be good, when the director wants the approval of those that did it before him.

New to the science fiction genre and the world of Blade Runner is Ryan Gosling (The Notebook, La La Land) playing K, a young Blade Runner. Gosling was asked what the role of K allowed him to do that he hadn’t done before. He responded, “Well it seemed like Harrison had so much fun in the original,” he joked. 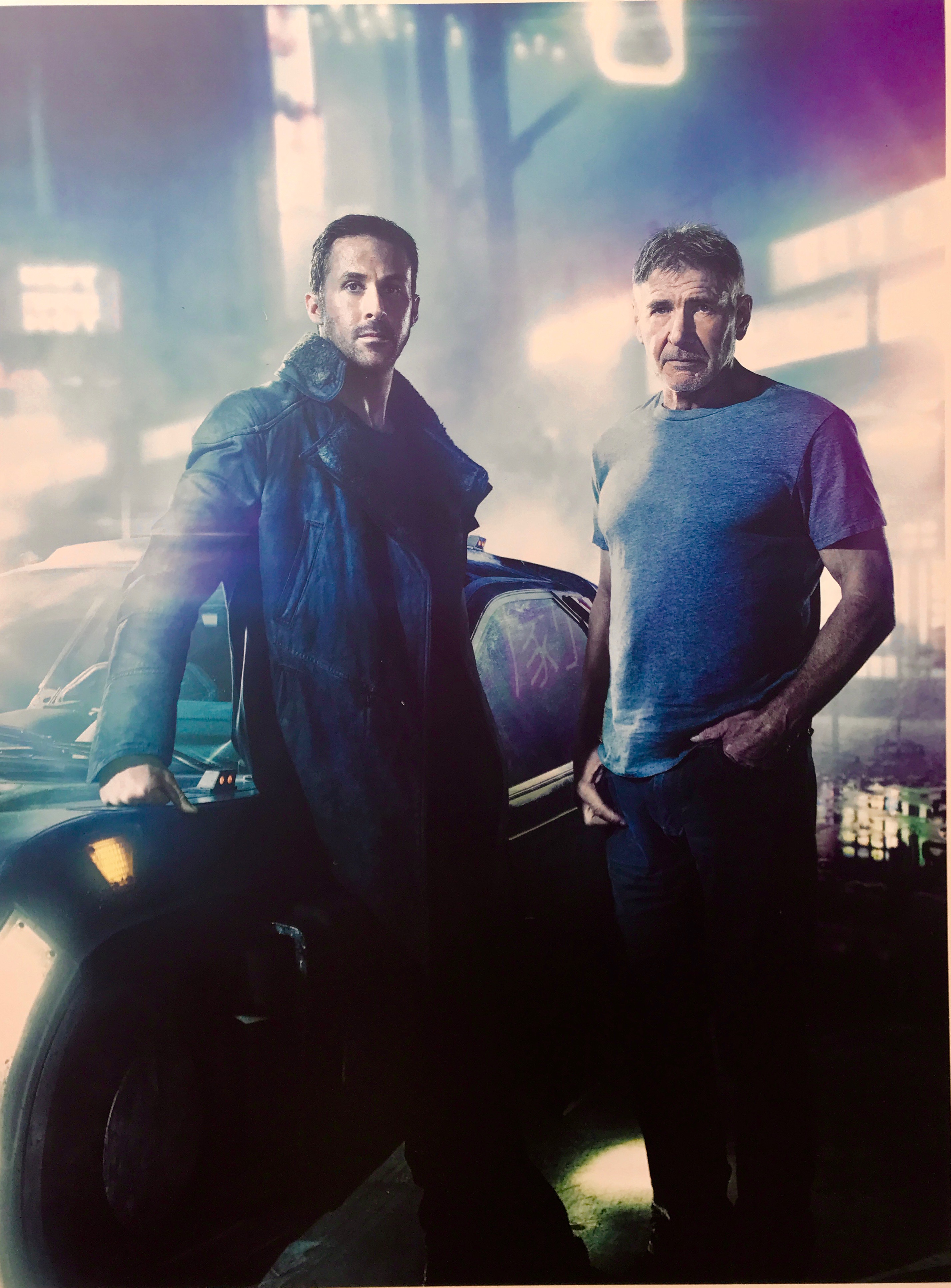 “It’s a very unique opportunity. It’s such a wildly unique film. When I first saw it I was 12. For 10 years I just thought I was watching a science fiction film, but what I experienced was something very different and what’s interesting about the film is not just the experience watching it, but how it stays with you. I wasn’t asking myself at 12 what it meant to be a human-being, but I was after, maybe not consciously, but subconsciously those seeds were planted and I realized how much influence it had on the culture I grew up in. Then to read a script that is such a love a letter to the original yet very much its own thing, was respectfully carrying out the narrative and themes of the original, at the same time introducing its own conceptual ideas that still were massive in scale, and at the same time intimate and personal, emotional, this is an experience that’s unique to Blade Runner and a wonderful opportunity for me to be a part of something very unique.”

Broderick Johnson (The Blind Side, The Book of Eli), one of the producers of the film said the film was a challenge “only in the sense that there’s so much pressure.” It was so important to us to try to make the very best film that we could.” Along with producer Cynthia Sikes, whose late husband Bud Yorkin worked for twelve years to get the rights to the original away from “a partner who was reluctant to see anything happen with Blade Runner, this was the perfect production team. From real sets and real props, you could see the love and specificity that went into this project. While praising the project, Sikes to the chance to give a special shout out to the women on the project. “The women have such great roles, courtesy of Hampton and Michael.”

Robin Wright (Wonder Woman, House of Cards) joins the cast as Lieutenant Joshi, Ana de Armas (War Dogs, Knock Knock) portrays Joi, Sylvia Hoeks (The Best Offer) joins the cast as Luv, and Mackenzie Davis (Black Mirror, The Martian) gives us Mariette. Wright praises the character and talked about how her favorite part was “being a badass.” Another badass chick is Luv. Hoeks says she trained six hours a day, six days a week to get into physical shape for her role. “Denis always says she reminds him of Audrey Hepburn on acid”, she comments.

“It was so much fun to play her. Sundays, I would have heat packs, ice packs everywhere. But it paid off. I gained those pounds of muscle and I really felt that I met the character while going through that pain and discipline. The whole world opened up for me. There were so many things to play with. There was satire, there was humor, she’s like a fashionista. She’s vulnerable. She’s like a kid in a grown-up world, trying to control everything, trying to be perfect and I think that’s something we can all relate to and I loved to take that on.”

These ladies were amazing and brought new life to Blade Runner 2049. With so much attention to detail from producers all the way to the cast members, this sequel looks to continue the franchise and make its mark on a whole new generation.