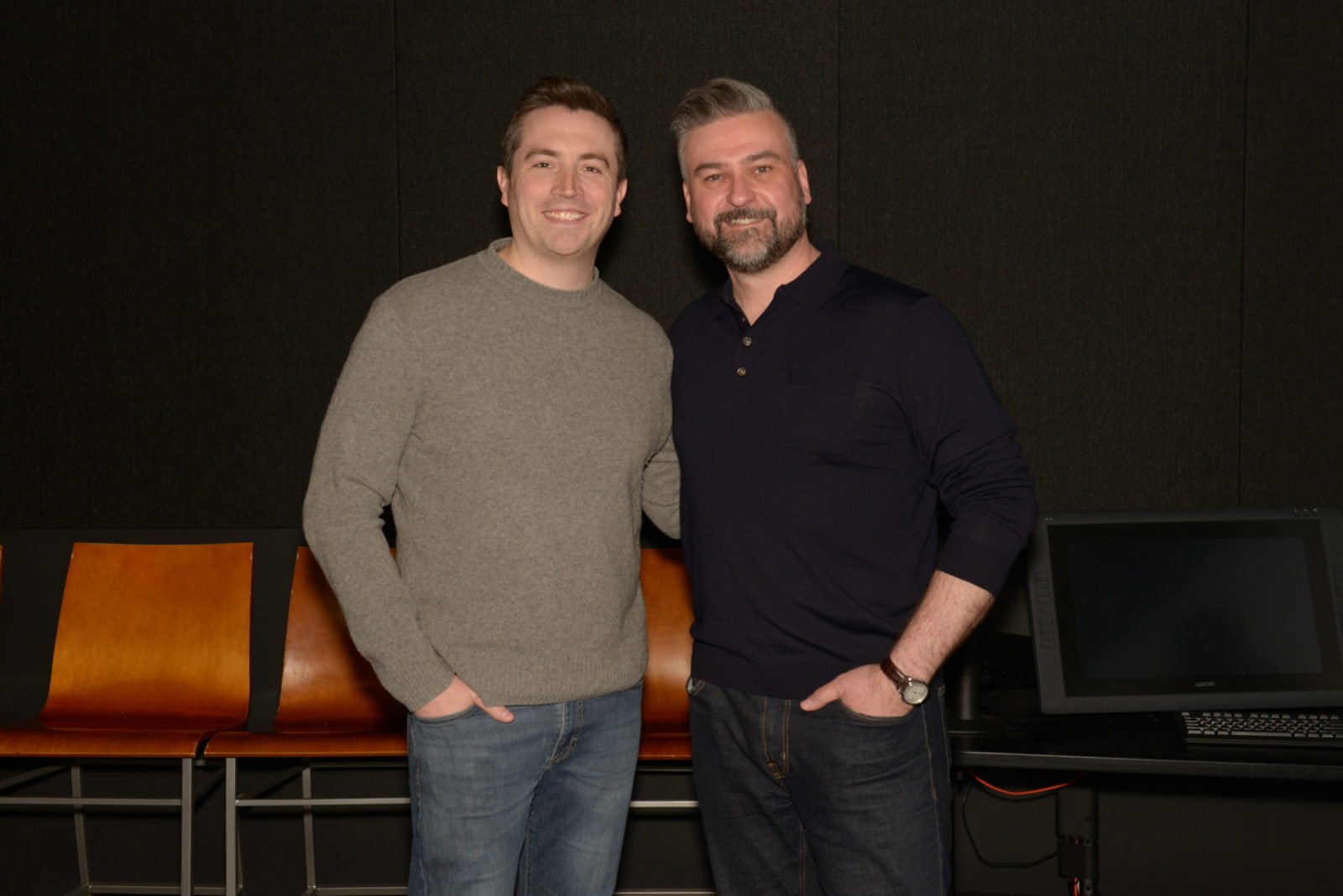 Nick Bruno and Troy Quane walked into the room one after another with bright eyes and high energy.

Blue Sky Studios’ new film Spies in Disguise is a kid-friendly film that is entertaining for the entire family. While on the studio visit, families were allowed and encouraged to bring their kids. When the directors sat down, they had the opportunity to speak about specifics that really stood out to the kids. Both of these talented men were ready for a barrage of questions from kids and their parents from a round table interview. BGN had a few questions of our own.

How big of a part would you say music played in the film?

Troy: Music was a huge part of this movie for us, all the way back to before there was even a movie. Nick and I both read the script and separated from one another. Then we started to put together songs that popped into our heads. So, we made a playlist. We just found songs that we liked, songs that had the right energy, the right sound, or the right rhythm that would help inspire certain sequences or just moods that we liked. And then we’d share and put that together.

Nick: Music is so inspiring. I’m sure when you listen to music, sometimes you can picture yourself going on cool adventures and saving the day. Even our animators when they’re animating Lance Stirling or Walter Beckett, they would animate to music. They sometimes put music in the background and you never hear that music in the movie. Lance would move with more swagger. He’d have a rhythm to the way he walks where Walter would have got great music. So, everything about him was a little bit more awkward and silly.

Troy:  So, music is a huge part of filmmaking.

What is the biggest challenge in developing the narrative for this story?

Nick: That’s a great question because there are so many challenges with it. The biggest thing for us is we always have that teamwork message and the nonviolent philosophy. So, you hold those up as your North Star, like that’s your theme and everything has to be based around it. But it’s really hard because you have to service so many things. You have to service entertainment, story, making sure that everything that you’re doing is revolving around that theme, making sure it’s funny, making sure it’s sad and scary. If you’ve ever put together a paper for school, [sometimes] you put it together and you read it, you’re like, “This is not good.” Right? It’s hard. So, the great thing with our story team is we get to put stuff together. Often when we get to writing our pages, we’d sit in a room with our writers and come up with ideas, jokes, and feelings.

What did you look for when hiring your main protagonists?

Troy: With this movie, we started with Lance because we knew he was going to be a pivotal character for everything else in the story. He needed to be cool and smooth, and a little bit overconfident at times, which can be unlikable. So, he needed to be funny to offset that aspect of his personality. We looked at who was big when we were growing up, like who were those actors who embodied all that. Both of us kept coming back to Will Smith in Fresh Prince [of Bel-Air]. He was cool. He had musicality. He had a lot of swagger. But he was kind of dorky and at the times he had that, he was approachable. He had charisma.

Walter had to be somebody who was vastly different from Lance. So he had to be a little bit geeky, but sweet, naive but optimistic. So we had all these aspects. And we just found that Tom Holland had all those things; he was a genuinely nice guy. For this part, he had used his American accent.

How much input do big actors have when the film is being developed?

Nick: It’s less about official input and more about casting people for their talents, in every aspect of the movie, but especially with that, and you want them to have input in some of that.

One final question, when will the DVD be out?

There is something mesmerizing when two powerhouses decide to present on their work. Both Nick and Troy speak with such grace and eloquence that it feels as if they are directly talking to you. With their soft tones and funny jokes, the brief time that was allotted felt like anything is possible. I guess that is just the magic of Blue Sky Studios.

A Black Girl Nerds Guide to Blue Sky Studios: 10 Reasons to Check out ‘Spies in Disguise’

Review: ‘Spies in Disguise’ is Not Bad, but Not Overwhelmingly Good Either

New Trailer and New Single for ‘Spies In Disguise’