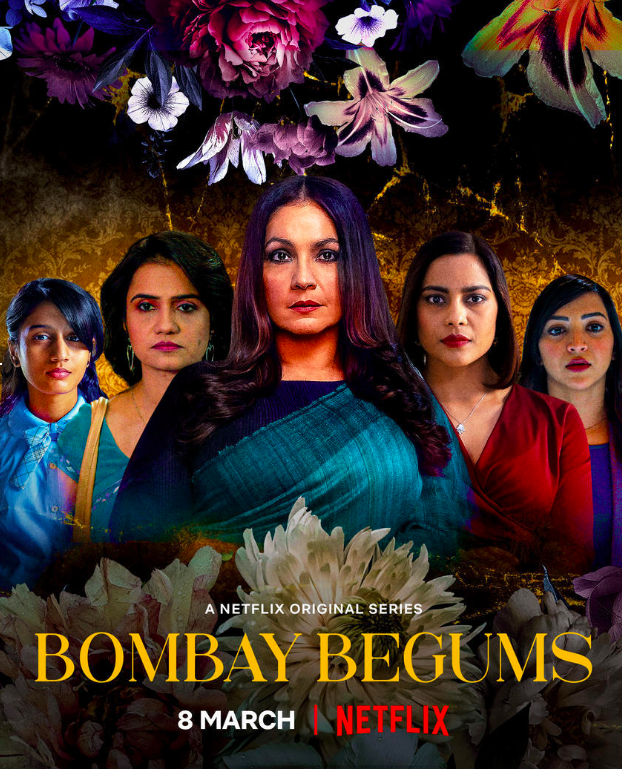 “Heavy is the head that wears the crown”: a phrase that society has repeated for centuries and continues to hold true, especially in Netflix’s new series Bombay Begums. (“Begum” is a royal and aristocratic title, especially an honorific for Muslim women of high social status, accomplishment, or rank.) This particular Indian drama focuses on the women living in the city of Bombay and their fight to be on top. To be exact, their fight to wear the crown as reigning queens in their field, school, or city despite dealing with the men in their lives and the women fighting for the crown. There is a certain amount of work to be done in order for the women to get what they want in this city.

Shai (Aadhya Anand) is a 12-year-old girl, coping with the death of her mother as the rest of the world has moved on. Shai is also the stepdaughter of Rani (Pooja Bhatt) who happens to be CEO of the Royal Bank of Bombay. She is also the new girl in school, as well as dealing with a crush and girls who have hit puberty before her.

Her narrations set the tone of each episode, posing questions to her mother on love, life, and womanhood. She questions the structures in which women live but also the possibility that love affects women in so many ways. Having yet to experience her period nor attract the object of her affection, Shai refuses to go to her stepmother for assistance but deals with it on her own or has her caretaker assist. Her father doesn’t step in to assist with getting the two women to get along, and her brother acts however he wishes with no real consequences. She’s in a new school but has no new friends. However, Shai takes notice of how the girls there have ideas on how to capture the object of their affection, a way that Shai wonders if she could participate in without having the same bodily gifts that the other girls have. Heart break at her age is inevitable while she explores the world of love.

Rani, newly appointed CEO of the Royal Bank of Bombay, loving wife, and stepmother to two teens. The queen title fits perfectly for her but that does not take away the troubles that she deals with. As CEO, she fights to keep her title as she is constantly questioned by the all male board and owners for each of her actions. Her husband still holds a candle for his dead wife while her stepdaughter refuses to acknowledge her as a parent. Her stepson makes a deadly careless mistake by driving drunk and running a kid over. Luckily, the kid lives and Rani is able to pay the mother, Lily (Amruta Subhash) who happens to be a dancer and prostitute, to keep things quiet. However, that payment will never stop until Lily gets the funds to get a better life for her child and herself. Dirty deals in Rani’s past affect every aspect of her life currently. However ruthless Rani may seem, there is a caring heart behind her sari.

Fatima (Shahana Goswami) is a promising young employee at the bank. She is also married and hoping to be a mother soon but secretly wishes to climb the corporate ladder. Hand-picked by Rani herself, Fatima is given a promotion over her male mentor who is Deputy MD of the bank. Her husband, Arijay, wants her to quit, for the sake of their child (his wife is also above him at the bank) but the offer is too good to refuse. When she has a miscarriage, Fatima and her husband choose to have a child through a surrogate. But even then, Fatima’s work has precedence over everything else. Despite the fact Rani picked her for the promotion, Fatima’s loyalty is to her mentor, even when it comes out that he has sexually harassed her former secretary, Ayesha. She would rather believe that Ayesha is a homewrecker than a victim. However, she feels when it comes to his affair, it doesn’t apply to her own life.

Ayesha (Plabita Borthakur) is a young and ambitious employee of the Royal Bank of Bombay. Coming from a small town and being a woman, Ayesha deals with the set rules that are placed upon young women that come to live in the big, traditional, city alone. After she is fired by Fatima, Ayesha is kicked out of her apartment when she is caught drinking and smoking her grief away. A stroke of luck arrives when Rani finds her crashing in the bank’s bathroom and gives Ayesha a position to head upa project in the bank’s charity department, putting her in place to build up Lily’s business idea. While Ayesha repairs her career by asking to be placed under Fatima’s mentor, she hops from home to home with lovers and exes, getting into some sort of trouble until she is assisted by a male coworker. Not to mention that she goes on an exploration of her own sexuality with a beautiful jazz singer. At work, things don’t go the way she hopes when she gets tipsy at a work event and speaks to Fatima’s mentor about working under him and all that she can accomplish as one of his underlings. Unfortunately, when he offers her a ride home, he takes things too far and pushes Ayesha to do things to him without her consent. Days after, Ayesha does her best to cope, but the trauma sticks until she places a formal claim against him. Ayesha pushes for Lily to get her factory and doesn’t back down from her harassment claim, even if no one believes her at first. She may not have the queen title but she is slowly on the rise.

Lily is a single mother, dancer, and sex worker. After she takes a young man’s virginity and gets paid, her son is hit by a car (but not killed). The driver happens to be the young man, and his stepmother is none other than Rani. Seizing the opportunity, Lily makes a deal with Rani that gives Lily a chance to put her son in a better school, giving him more opportunities. Rani agrees as long as the accident is swept under the rug. Lily realizes that she wants more than just a bit of cash; she wants to own a business and support her son in her own way rather than continue making money as a sex worker. Of course, there is pushback from some men in town when Lily’s factory is being set up. Her factory building is set on fire, and men run to her son’s school calling her a whore and passing out fliers. This causes a rift between Lily and her son but also discourages her from continuing her passion. Lily is all but ready to leave the country, son by her side, to be a mistress to an old lover. However, Ayesha wants her to complete the project, and her son begs her to finish what she started. With newfound strength Lily strives to open her factory. Her factory opens up positions to other dancers and makes her son proud to have her as a mom.

All these women go through difficult journeys in order to strive in a male dominant world. Their choices are questioned, their lives ridiculed, and though they may stumble, they do their best to fix their crowns. This drama certainly looks at what women within different stages of life could possibly go through in this age of #metoo. It is a show full of drama in each episode, but I can relate to one woman or another. Netflix brought forward stories that are told from a different country that every woman around the world can understand during this woman’s month. I’m not saying that I loved each woman and their decisions or actions, but there is a form of raw realness that I can appreciate. Every woman knows how hard it is to wear a crown, no matter what position we have in life.