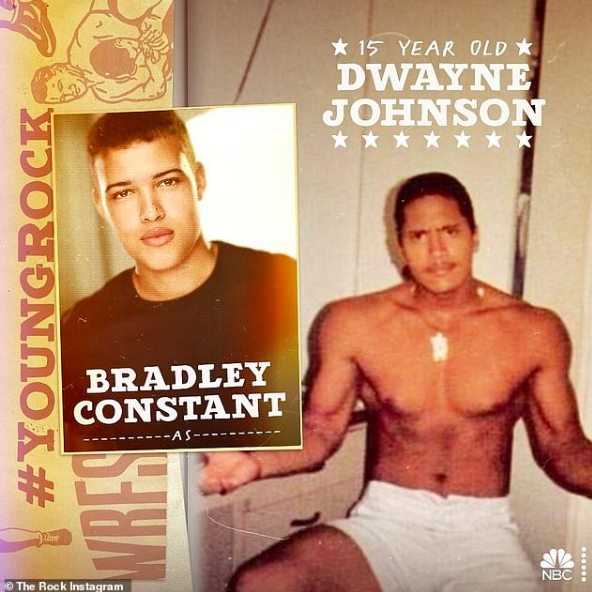 In the few instances of freedom that are available to us in between work, cooking, and sleeping, there is nothing better than taking a few moments for ourselves and enjoying a comedically engineered sitcom like Young Rock. This light, single-cam comedy inspired by Dwayne Johnson himself is now available for viewing on NBC.

If you haven’t had a chance to watch an episode of Young Rock, the premise is that Dwayne Johnson “The Rock” is running for president and is being interviewed by Randall Park, who asks him a series of interview questions, and sometimes those comments are even humorous. (“Your critics say you lived the comfortable life so long you don’t know how to relate to others.” “Why are you so wonderful all the time?” Not so much that last one, but that’s the general idea.) Even if you know absolutely nothing about The Rock, there is comfort to be found in Bradley Constant’s performance as a teenage Dwayne Johnson.

So, when I had an opportunity to speak to Bradley Constant, I jumped at the chance to interview him. If nothing else appeals to you about the show, one thing that might help is Bradley Constant’s cute smile. This rising star is new but has a lot of momentum going for him. At 22 years old, Constant has landed the role of Dwayne Johnson as a teenage high school student. This really works because Johnson as a teenager resembled a grown man.

Constant being more versed in acting than I am, we got personal about himself and acting. When he spoke about how he related to young Rock, what he wanted his audience to take away from his performance, and his feelings about his new role, I couldn’t help but laugh and agree. He injected his experiences as an actor into my brain, and they somehow became my feedback about a role that I had never auditioned for or knew anything about.

With only a few minutes to discuss his new adventure, I quickly asked him the first question.

So, I hear you’re a runner. How did you get started in that and why running?

Going into high school (9th grade) I wanted to get into shape. I had been recovering from a surgery I had. The first mile took 25 minutes to finish. [Laughs.] I started running every morning at five and I kept getting better. It also really helped to stay motivated and push myself further.

The nerd in me wants to know if you are into tabletop or video games?

I am absolutely into video games. I am an avid gamer. I now play Xbox, but I also play the classics games and systems.

What are you allowed to tell us about your character?

I play a Dwayne Johnson at 15 years old. His family doesn’t have the financial stability that they one had so that is an adjustment. He is also a little wild about girls. He is trying to pursue his love interest, “Fine Ass Karen” as he calls her. He is a teenage boy who wants to make a statement and an impression. So he steals some clothes and lands himself in a lot problems. But throughout these experiences, he is growing and learning some very valuable lessons.

In what ways can you relate to this character?

There are so many ways, one of which is the balance act of home and school life. People don’t really know what is going on at home and there are valid reasons for that.

What do you bring to this character that isn’t written in the script?

Well, the script is amazing, and it shows how three-dimensional this character is. We don’t really know him, but we want to get to know him We want to see him and understand him. I bring that sweet and caring personality and help it come to life.  I really feel like this performance can speak to many people.

What spoke to you about this particular show?

In one word, relatability. It was easy to play him as a teenager and it felt natural to be him. You come to realize that he really cares about his family, and so do I. I tell my family all the time that I love them, every time.

But also, I would get a chance to play The Rock! He is a famous guy! One thing that really stuck out was how not everything in his life is glamorized. You get to see the people who came into his life and helped him become the person he is.

This is your first major role. How do you feel?

Incredible! Words don’t justify the feels I feel being able to play this character! I could not have asked for a better role.

What did you do to prepare for this role?

Before the audition, I did a lot of research. You really don’t want to imitate but instead connect what’s on paper to your own life and see how it goes. It’s really about finding that human aspect of the character that brings out the qualities you like.

What would you say is challenging about this role?

This is my first TV show, so there are so many challenges. What I do is talk to as many people I can and study everything I can. But nothing felt overwhelming. I think it was because everyone is so welcoming.

How do you handle performance anxiety?

There are times I couldn’t speak, or I had really sweaty palms. During those moments I just told myself you’re going to have to do this, so just go for it. I think it really helps to prepare, and once it’s done you know you did the best you could. Another thing is that I always have my family. I got a text message from my family before my interview, that really helped. I love them.

What do you want your audience to take away from your performance?

I want them to see how relatable Dwayne Johnson is. He is a kind and down-to-earth person. He is really amazing and has an incredible story to tell. I also want them to laugh and enjoy the show.

With the few moments of freedom that we have from work and other obligations, it’s nice to know that you can sit back and enjoy a few minutes a bit of eye candy, Bradley Constant. Why not check out Constant and see his performance in the new series.