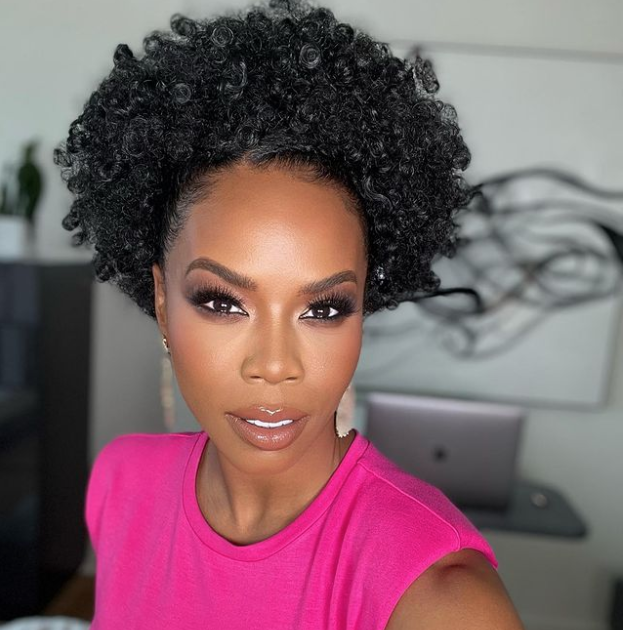 “Down in the valley where the girls get …” If you know the rest of the phrase, then you’re a watcher of the record-breaking show P-Valley on STARZ. If you’re a fan, then you call it the Pynk (affectionately pronounced PANK).

BGN had a telephone conversation with Brandee Evans, AKA Mercedes, the HBIC (the “B” stands for booty-shaker) of the Pynk. We spoke about the athleticism of pole work, Mercedes’ character arc this season, and addressing the pandemic on television while we are still living it.

With your extensive background in dance, was tackling the role of an exotic dancer a big stretch for you?

Yes. I have not done any exotic dancing or pole dancing before P-Valley. I’m used to hitting that choreography like the choreographer says. It was absolutely challenging. I didn’t even know how to climb a pole. In the moment, you have to completely entertain the crowd. You want them to throw money. You want them to be excited. I remember Episode 1, Season 1, I was like, “Wait a minute. I need them to act like this is the club, honey, because I’m doing all these stunts and I have worked so hard so Imma need more things to happen.”

That’s when freestyle type moments start coming out, just trying to get them excited. What’s going to make them jump? That’s what the dancers who live in this world actually do. What’s going to make them throw this money? Thank God for Jamaica [Craft] and her amazing assistants. Our doubles were so kind as to try and to show us different moves. The last thing I wanted was to not look like my double. I installed a poll in my house this season. My body was two years older and weaker. I was like, “Oh, this is not giving pre-pandemic pole climbing. You are way behind.” I had to do extra work this season to try to catch up to where Mercedes was last season, and then exceed where she was last. I learned when I got into this world, not only are [these women] athletes, y’all don’t pay them enough, right? This should be an Olympic sport.

Why do you think Mercedes has been such a breakout character?

Women see themselves in her. You might not be on the pole like Mercedes, but you’re grinding, you’re a good mother, you’re hustling to take care of your children, you have dreams, all things that Mercedes has as well. She’s driven, she’s a go-getter. We know so many women like that in our lives. That resonates with a lot of the audience members. You see someone or you know someone like Mercedes in your life. Katori [Hall] has done a great job of humanizing the characters.

Mercedes always seems angry, and given what we know about her mother, it’s understandable. Will we get to learn more about her background this season?

Yes, you will learn more about her background for sure. I won’t say that Mercedes is angry, and I think that you will think differently too after watching this upcoming season fully. Mercedes just knows what she wants.

She’s older than a lot of the girls too. Mercedes resonates with me in that sense. She is not 20. She’s been there, done that. She’s got a child. She has lived, but a lot of times life might make you seem harder. She also doesn’t want some these younger girls to have to go through things that she’s gone through and had to fight for. I know I’ve been told that before: “Girl, you just so tough. You so hard.” Well, I’m trying to keep you from doing what I did. Sometimes Mercedes, as well as myself, has to learn to let people make their mistakes on their own. You had to grow through it; let them grow.

What can we expect from Mercedes’ character arc this season?

Mercedes is going on a rollercoaster ride. You’re gonna see her doing some things that she said she wouldn’t do. But remember, Mercedes always has integrity. What she’s trying to do is always at the forefront of her mind. She loves God. She doesn’t want to feel like she’s a disappointment to God. She also doesn’t want to be a disappointment to herself or her daughter either, but she has to figure out how to get her dream. She’s lost the money because Patrice has stolen it from her. She’s in a pandemic. We all know how hard that is on businesses in general, especially small businesses. She’s trying to figure out how to take this dream that she thought she was about to have and fight for it a different way. The club’s closed down, so you’re about to see her try to think of innovative ways to make it through this season and dream her new dreams.

Season 2 explores life in the pandemic. How does the pandemic affect the girls and the Pynk?

Much the same way it affected us in life. I’ve seen a few comments. Some people loved it, and some people are like, “Why are you tackling the pandemic?” We’re still living in it, and it’s authentic. I think Katori did a wonderful job by reflecting a time capsule, in a sense, of this world. Though we all want to try to forget that the pandemic happened, this is still happening. It is our new normal; we can never be the same.

The girls in the club are trying to figure out how they still live their life and still live this dream, but the new way, the new normal. It’s affecting them in every way, from people getting sick to people who pass away. Everything that happened to us across this world and pandemic is going to happen in the club. That’s real. It’s happening to nurses, doctors, teachers, but it’s also happening in the sex industry as well.

Are there any future plans that you can share?

I have another movie that I’ve done. It hits BET+ [June 9, 2022]. It’s called B-Boy Blues. I play a character called Michi. I’m very, very excited about that. Also, The Family Business is dropping Season 4. I play an assassin in that, and that’s in July.