It’s early evening, and my associate and I cram into the lower level of the Roxy Hotel for a sneak preview of VH1’s new ongoing series, The Breaks. For those who have yet to check out the original movie that spawned it, The Breaks is VH1’s new serialized drama, based on the effervescent New York Golden Age rap scene of the 90s, where labels like Tommy Boy ruled the roost. Inserted into the tableau of decades past are a few different characters, though the show is arguably centered on Nikki Jones (Afton Williamson), a dues-paying college graduate who has decided to shove all her chips into a career as a hopeful A&R for this thing called rap. 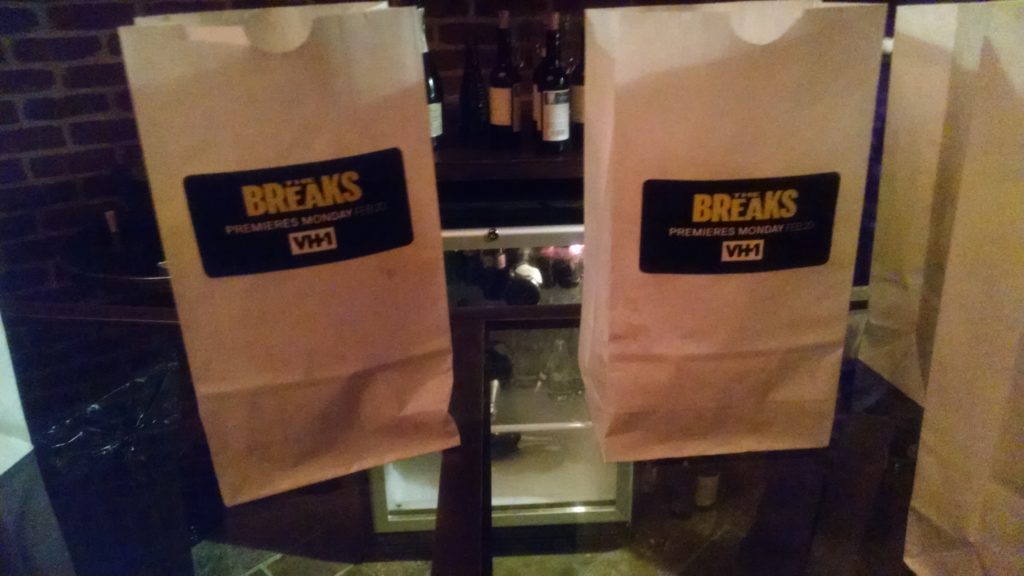 The Roxy Hotel screening room downstairs has the feel of a sort of carpeted cave, featuring a slightly low ceiling that either adds to the cramped atmosphere or the intimacy, depending on your sensibilities. In addition to the freely-flowing beer and wine, most attendees were enamored with the complimentary movie grub, which included glass pickling jars filled with gummy bears, m&ms and skittles, full-size candy bars, and the continuous racket of freshly popped popcorn.

Emblazoned on all these materials was the logo of the series, a name ostensibly taken from Kurtis Blow’s seminal single from 1980. This is a little bit tricky, as the show’s era explicitly references a later period in the art form’s history, not to mention the fact that many properties sport this moniker (including a little-seen hip-hop cult-comedy from 1999 which I have a soft spot for). 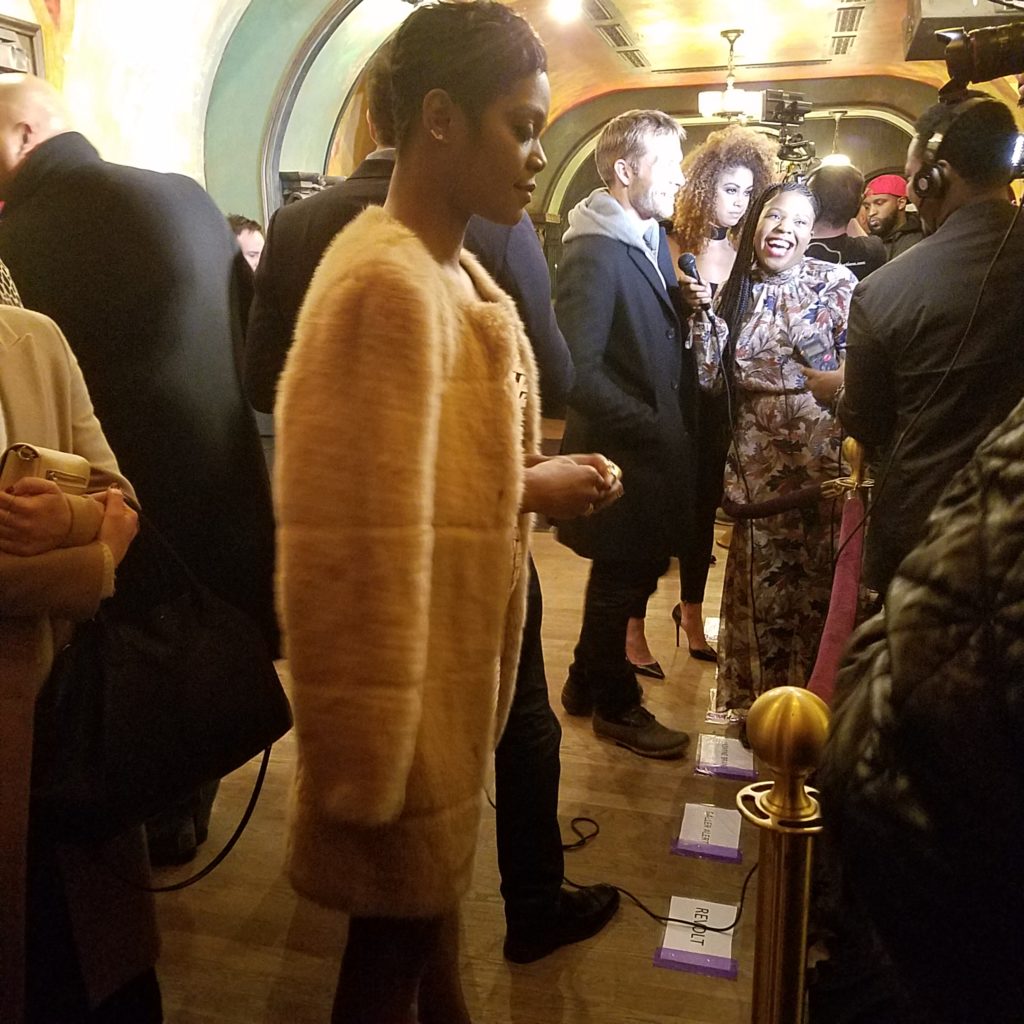 The red carpet area was accessible through an unpopulated piano bar, and many of The Breaks‘ stars were present and accounted for. Afton Williamson most certainly stole the most attention and SD card-space, wrapped in a provocative cream-colored dress that was part cocktail-hour, part Mila Jovovich in The Fifth Element. I couldn’t help feeling that she was outfitted for an audacious end-of-the-world party, whereas most of her co-stars sported more low-key-but-lit living-room wear.

It’s a little intimidating meeting Antoine Harris after watching the series, only because his character Ahm is a knotted-up bundle of intensity, a shambling peril whose piercing yet disinterested gaze always seems to be painting circular targets on anyone sharing a scene with him. This stoic air of menace merges with the character’s artistic side, wanting to make music in a makeshift booth while the demands of his day-to-day seem to claw at his lyrics. Conversely, Antoine Harris was positively chipper and gregarious, excitedly speaking to everybody he could, even past the showtime bell. 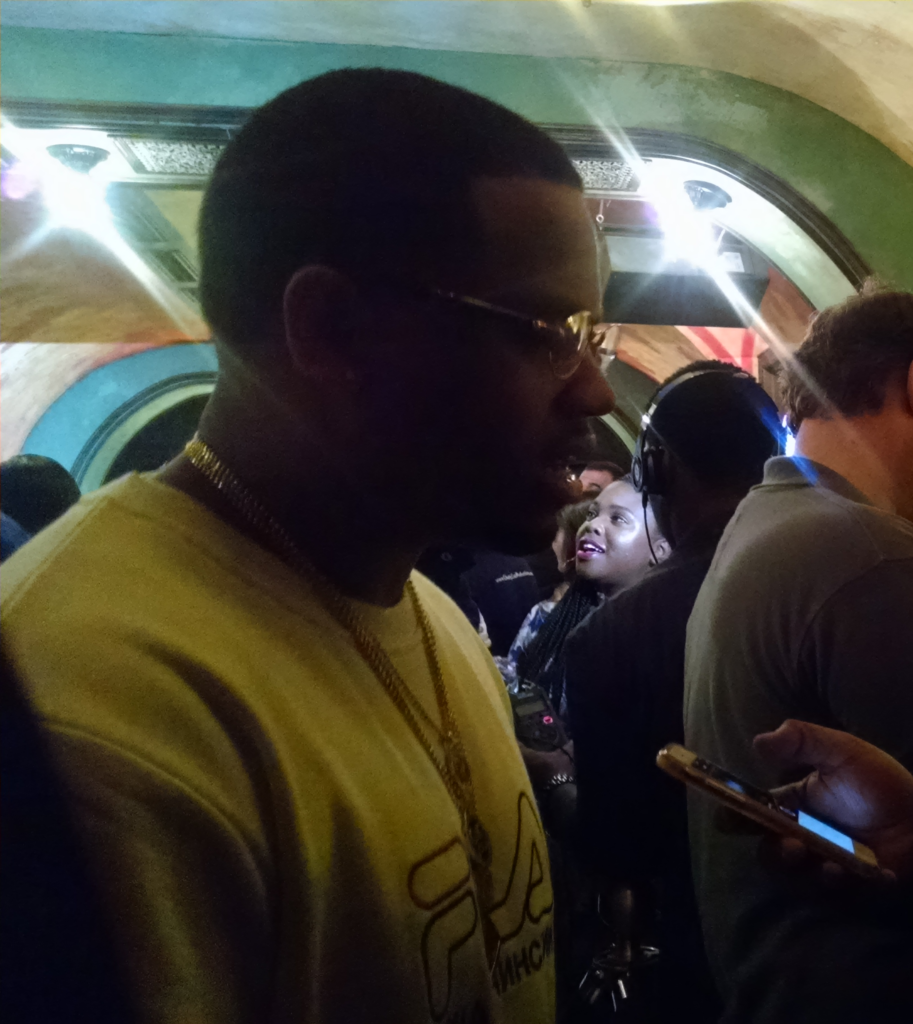 The scenes in The Breaks where Ahm performs are the only moments we see the character alone; he is otherwise presiding over territory and mediating orders to his street soldiers, or even budding music producer DeeVee (Mack Wilds). In the closet recording booth, ensconced in stapled egg cartons and completely isolated from the rest of his life, he keeps time with a headphones signal, rattling off city commentaries as breathless burners (a hilarious moment in episode 2 features DeeVee sheepishly asking “Why don’t you ever write any actual hooks?”). You get the feeling that Harris is trying to reach for something essential, connecting to and positioning his performance with the wider Golden Age. 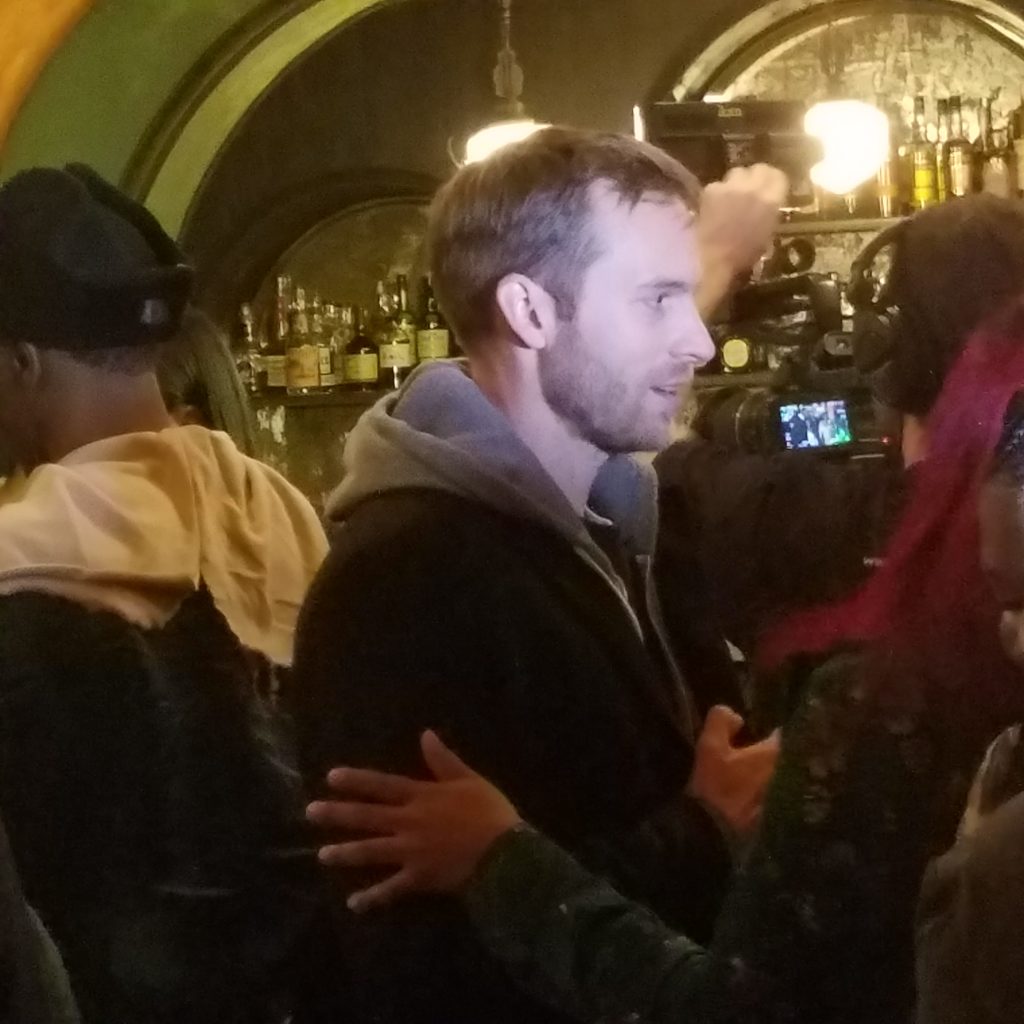 As mentioned, the relationship between DeeVee and Ahm appears tenuous, always seeming close to trauma. That chemistry relates to the history and daily interaction of the two actors I envision as the heroes of The Breaks, even though the former has nothing but wild success on his mind and the latter only wants to make it through the following week with his neighborhood rep intact. 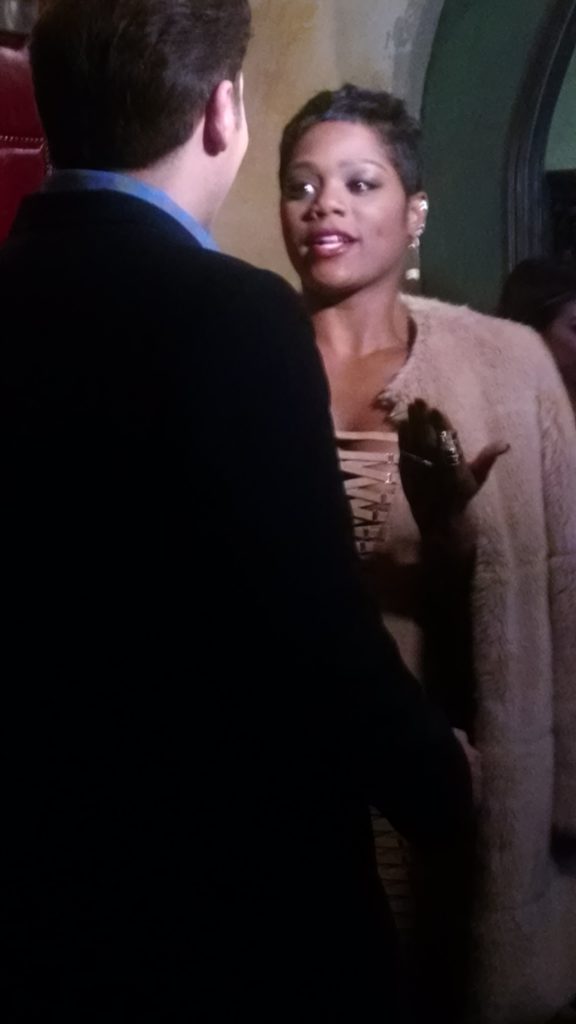 I mentioned this perceived chemistry to Mr. Harris, who had plenty of positive things to say about his co-star: “Mack is my dude, he’s a good guy. I’ve known him for a long time, and I saw his journey. He’s younger than me, but he’s a veteran, you know what I’m saying? Someone like him, you could learn a lot from the man. He’s been in this game for many years but still, carries himself like he hasn’t done a thing. His work ethic remains.

Interestingly, while Ahm’s character interacts with the more seasoned, street-level elements in the original movie, this doesn’t happen to include any women at all. Will this dynamic change in the proper season go forward?

“Let’s just say that Ahm’s going to continue to live his life. You gotta understand, what we’ve shown people is just a few days in the life of the early 1990s. We’re going to continue to put legs on that story. Of course, he interacts with females as well as dudes. This season, he’s going to step outside of his sphere to process a little bit. But also, he’s in an organization where he’s the head of it, so he’s kinda still in the streets. He’s still tied down to it. But he does break away from that satellite. 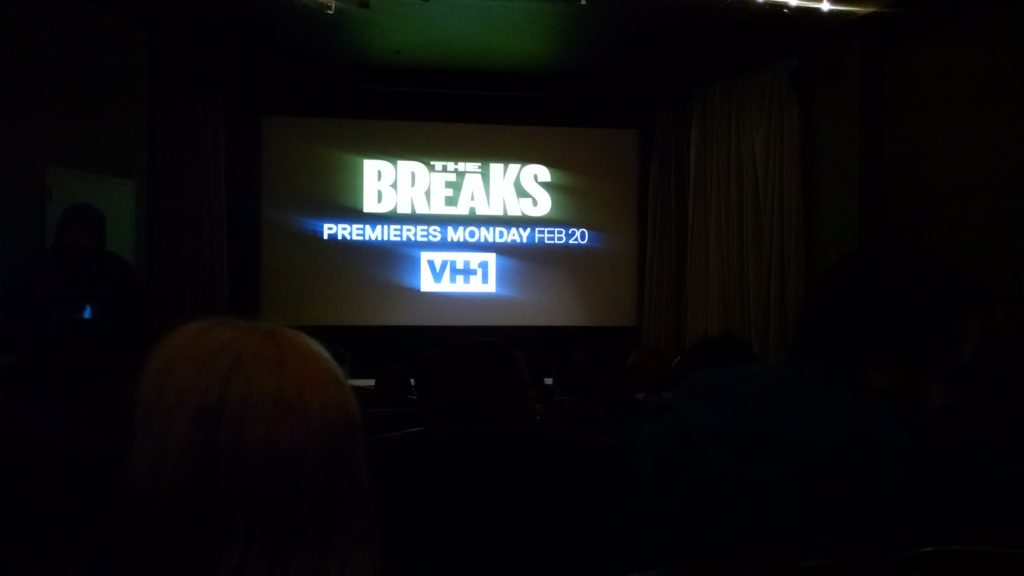 For me, the triumvirate of The Wire alums – being Wood Harris (Fouray), Method Man (Darryl, DeeVee’s dad), and Mack Wilds as DeeVee – brought the quickest sense of familiarity to the proceedings. While tiresome to stick on this fact that undoubtedly resides on most any website speaking about The Breaks, The Wire was simply one of those iconic, timely, watermark shows whose massive cast can’t help but carry its air along, wherever they later travel. Wilds’ character persists as Ahm’s most pronounced foil, constantly pressuring him (while wincing for a smack) to focus on making the next radio hit.

What was it like for Mack to be working with Method Man again? DeeVee’s father is the one character that seems the most pressured or unusual. As a medical orderly/custodian who hates rap, it’s increasingly strange to hear him bellyache about the pointlessness of his son’s journey to struggled music stardom. Wilds adds that:

“It’s honestly one of the most amazing things to witness. Because when they say ‘cut,’ Method is back to his regular self. Talking about the music, freestyling a little bit. But then when they say ‘action’ he’s instantly back into the dad role.”

The show relishes extended sequences where the character is, well, sequencing music. As a former hobbyist, watching DeeVee sweat the SP seemed genuine and unsimulated to me, and I was wondering how he prepared for the music production scenes in the show.

“I got a chance to sit down with Pete Rock & DJ Premier, Salaam Remi, these are guys who actually showed me how to truncate the beats, put them together. They told me ‘if you’re going to do this, and you want it to be authentic, you’ve got to [actually] do it.’ ”

As I’ve been hinting at, I see DeeVee as the true heart of the show. Although there are several characters reaching for distant carrots, DeeVee seems the purest, most creative, and possibly the one willing to take the most risks.

“The biggest thing about DeeVee is that he’s a dreamer. He’s one of those kids who’ll jump off of a building without first looking if there’s a safety net. He’s going to find out that the world isn’t that easy, and that not every building has that net. You might fall and bump your knee, but you’re gonna have to get up and keep going. You’ll get the chance to ride the rollercoaster with him, and see every bump and bruise along the way, scot-free.”

Episodes one and two were screened to an over-packed theater, requiring supplemental chairs to be brought into the aisles. One thing can be said for the actors present: they were excited to be there. Yelling out praise during key scenes and bolstering their crew-mates was a regular occurrence, although it should be noted that the individual I happened to be seated with fell asleep an easy half-dozen times. The Breaks is punctuated with dramatic moments and feels a little uneasy and unclear in these first episodes, albeit replete with fantastic moments as well. Make sure that you look out for the first time Ahm and Fouray have a private conversation, as I consider this one of the best scenes they’ve yet produced.

As for Nikki, her journey continues forward, and her partner’s ambition to find a job where his passions can be more fully realized and attended to remains pivotal. Another interesting note in the show, which was not rendered in the original film, is the fact that each episode seems to feature a Golden Age (or earlier) artist. In the first, we have Special Ed, and the second gives us Keith Sweat. Rather than give these brothers a heap of makeup or clever camera angles, The Breaks showcases actors giving their best impressions of these forefathers, while the original artists themselves may be hiding in a guest or background role. This is an unusual but altogether intriguing concept, and I’m wondering if it will be maintained in every episode of the series as a standard.

Although we were hustled out, crowd response seemed largely positive. Hungry fans of Netflix’s The Get Down may need to sidle up to this series to hold them over until part 2 finally drops. While the period differs from Baz Luhrmann’s Netflix series, the passion on display and the killer soundtrack resonates in a similar way.