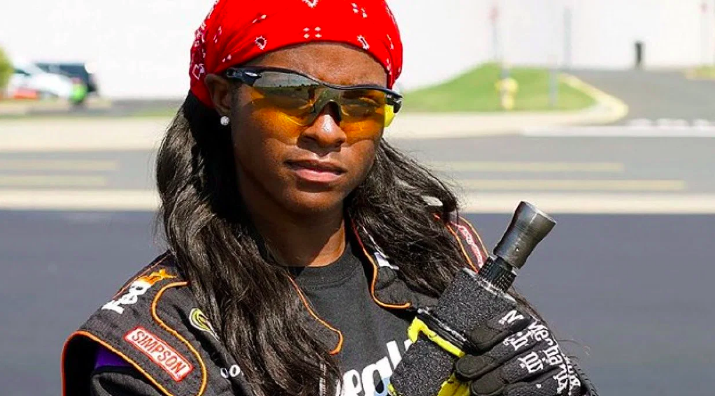 It’s Black History Month, and today is also the start of the Daytona 500. There is one woman who ties both of those events together, and that is Brehanna Daniels.

Brehanna Daniels made history by becoming the first Black woman to work for a pit crew in NASCAR’s prestigious cup series. She’s working hard this weekend during the Daytona 500, and due to Sunday’s rain delay, she will be spending President’s Day out on Daytona International Speedway changing tires and being a pit crew extraordinaire.

Brehanna is very dedicated to her work, and you can tell she’s passionate and loves what she’s doing. She stays focused. When there’s a delay or an unexpected event (like a Presidential visit) she manages to work well under pressure. The pit is an area where NASCAR crew members help with maintenance and inspection of vehicles to make sure they are perfect for the raceway before drivers get behind the wheel. Brehanna’s job is to ensure that the tires are changed quickly with precision and in record time since racing against the clock is what motorsports are all about.

Brehanna Daniels, a graduate of Norfolk State University, started off as a point guard playing basketball for the college based in Norfolk, Virginia. It was at NSU where she got involved in the NASCAR diversity program.

This was a twist of fate for Daniels since NASCAR wasn’t a part of her collegiate plans. She was attending NSU on a full basketball scholarship with her sights set elsewhere, but the NASCAR tryouts turned out to be a game changer.

Seeing is believing, and as more Black people are immersed and being represented in NASCAR, it allows other Black people to feel comfortable getting involved with being a part of NASCAR themselves. Brehanna’s presence here as a Black woman crew member is a big deal.

“Black women who may have always wanted to be a part of NASCAR, which is known as a white space, maybe didn’t have the courage to do so. However, today they see more people like me in the sport and hopefully will give them the motivation to do what they want to do. So I’m just trying to be that example for others that look like me in general.”

Brehanna’s words tell the truth. The more Black women see themselves reflected in spaces they are rarely represented, the more likely they will feel comfortable first wading in the water, diving into the pool of those spaces, and later swimming into their own lanes. We have to see ourselves in order to feel empowered and emboldened to thrive in whatever industry we elect to pursue. During my brief time with Brehanna in the middle of her prep for Daytona 500, I asked her for some final parting words of advice for young Black women out there who may be flirting with the idea of joining the NASCAR family.

“Do your research for the sport. And last but not least, work hard. You do anything you put your mind to.”

From Go-Karts to Race Cars: Bubba Wallace Is Carving A New Path