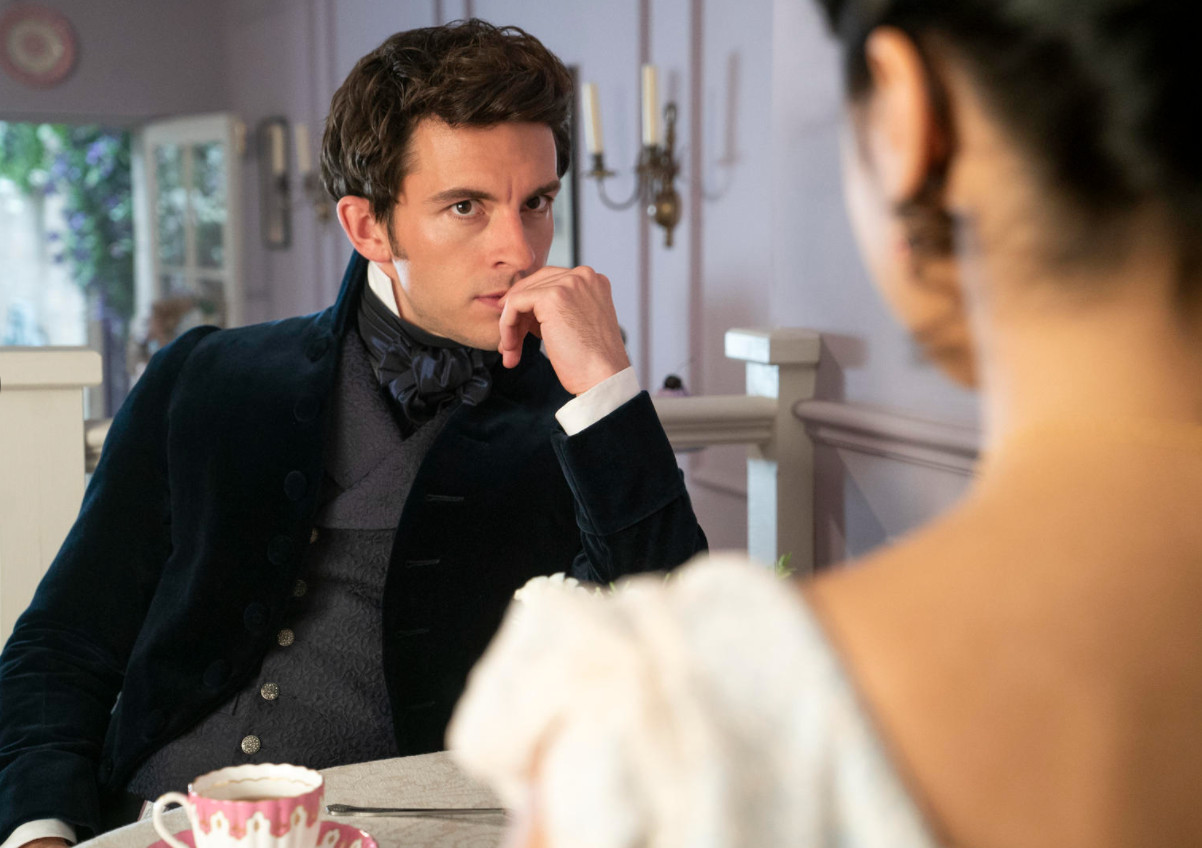 Dearest readers, the Bridgerton Press Conference has commenced. The ladies and gents of the cast gathered on Monday, March 21, 2022, to deliver the Season 2 gossip, and it was truly delectable.

Dusen described this season as “a game.” This alludes to a game that’s played this season, and the tension between Anthony and Kate, as they butt heads constantly. The agitation between them is what Bailey describes as the “enemy as lovers trope.” This reflects how “enemies” eventually see past their differences and preconceived notions of each other, usually catching feelings for the other in the process.

Ashley adds to this idea of “the game,” by describing that Anthony and Kate have a very “it takes one to know one” mentality throughout the season and, “whenever they’re alone, something happens. It goes deeper and deeper.” They set things up to sound both stressful and steamy this time around.

While their love-hate relationship is building up to being a major player this season, Anthony and Kate’s “game” isn’t the only one the cast discussed.

It was noted by both Chandran (Edwina) and Rosheuvel (The Queen) that the female energy of the characters in this season is strong, but the male characters are just a tad clueless. Rosheuval explained there’s a special moment between Edwina and Queen Charlotte that helps them form a unique bond as compelling female characters.

She said, “female energy is celebrated” and strong, as it “drives the storyline.” She compliments Chandran for being a talented actor and pleasure to work with, to which Chandran replies, “game recognizes game.”

Their relationship seems to be built on mutual respect and powerful female energy both on and off-screen.  That said, their rosy relationship may have a few playful thorns.

When asked which character they would portray if they could choose any role, everyone agreed that it would be Lady Whistledown–except Chandran. She smiled and said she would want to be the queen. Everyone laughed as she continued, saying, “I’m coming for the crown” to Rosheuvel, who laughed. As true Bridgerton fans know, the Queen is not one to quiver over a threat or a challenge. It looks like the game really is on.

While it’s certainly a season with fires burning, the cast looked beyond the tensions of love, games that are played, and other obstacles to arrive at one of  the central themes, “family.” Used a few times by different cast members, the feeling of family extends beyond their on-screen relationships and is something they cherish off-screen. Bailey shared that his fellow cast members “feel like family,” as they echoed his sentiment by expressing a certain comfort on set.

When asked which single word he’d use to describe Season 2, Bailey said, “yearning.” Yearning obviously links to Anthony’s love story, but it also resonates with many other arcs throughout the second installment, as characters yearn and long for new experiences, people, and places.

It won’t be long before audiences are done yearning for Season 2, and the magic can begin. Season 1 ignited a certain spark that has left most sitting on the edge of their seats, ready for the performance to begin.

Season 1 made people from around the world fall madly in love with the ballrooms, scandals, and love matches of the Regency-era period drama with main character Daphne Bridgerton (Pheobe Dynevor) and her love story with  Simon Basset, the Duke of Hastings, (Regé-Jean Page). Developed by Chris Van Dusen, produced by Shonda Rhimes, and based on Julia Quinn’s novel series of the same name, Bridgerton has garnered attention for its unique use of popular song covers, steamy love scenes, and riveting costumes.

The show has also become cherished for its continued diverse representation of Black people and people of color in starring roles, which are typically unheard of in Regency-era period shows. Instead of being “the help” or limited to low-born roles, they are authority, beauty, and multifaceted character development.

Season 2 has a new romance to explore, but this time with Anthony Bridgerton, the Viscount (Jonathan Bailey), who will be taking center stage along with newcomers Kate Sharma (Simone Ashley), her sister Edwina Sharma (Charithra Chandran), and their mother Lady Mary Sharma (Shelley Conn). Another courting season is about to begin and Anthony must find his bride. Of course, that task isn’t as simple as he initially thinks.

There will be other new faces with many familiar ones as well, including the Bridgerton siblings, the colorful Featherington family, the snarky Queen Charlotte (Golda Rosheuvel), the clever Lady Danbury (Adjoa Andoh) and, of course, the ever-gossiping Lady Whistledown, narrated by Julie Andrews. Stay tuned to see this second chapter reveal even more scandals to turn things positively upside down.