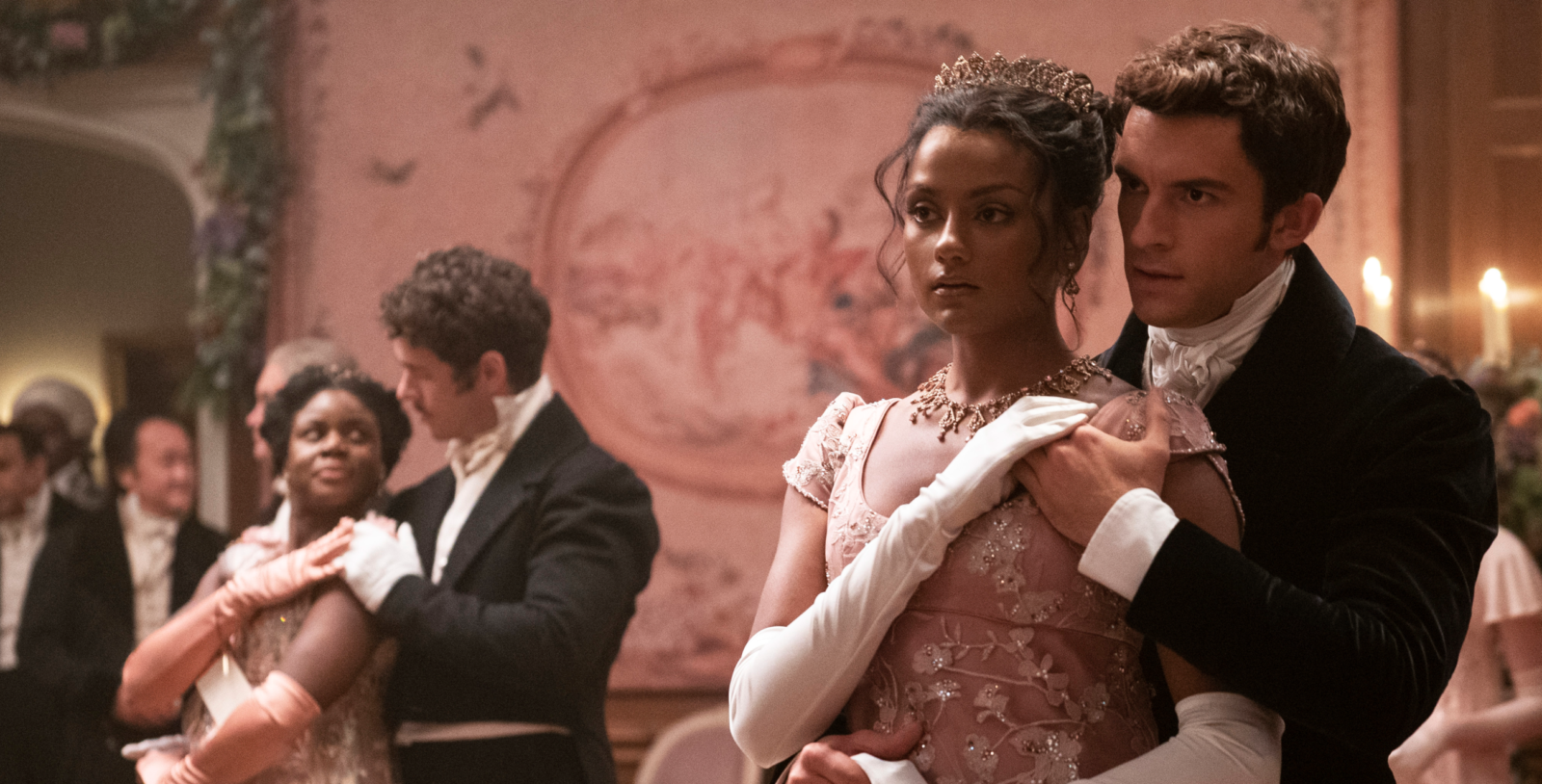 Painful predictability, secret horse rides, scandal and gossip—welcome, dearest readers, to Season 2 of Bridgerton. Once again, it’s a chance for the Regency-era English society to discover that love, indeed, does conquer all in the popular Shondaland Netflix series created by Chris Van Dusen and produced by Shonda Rhimes.

This time around, the story focuses on the eldest sibling, the stubborn Anthony Bridgerton (Jonathan Bailey). The viscount is looking for the perfect match to marry. However, to little surprise to anyone, things don’t go as smoothly as he hopes. This season escorts the Sharma family in with newcomers Kate (Simone Ashley), Edwina ( Charithra Chandran), and their mother Mary (Shelley Conn).

The show continues its great track record for including diverse characters in a period-era show by featuring Indian women as the season’s leads and romantic interests. While all of the pieces are in place for a simply delicious second installment, something falls slightly short. With that said, it’s an engaging watch for anyone who enjoys a diverse period-era romantic comedy with a lot of scandals.

Bridgerton Season 2 weaves in the historical backdrop of England’s colonization of India between 1811 and 1820, thus creating a complex and painful relationship between the true cultures. After being brought up in India, the Sharma sisters aren’t accustomed to traditional English society. In fact, in many ways, there’s shame connected to their foreignness. Luckily, that doesn’t slow them down. This season scores major points for presenting women of color that are beautiful, smart, talented, and bold.

In fact, there’s a certain tenacity present in each character this season, as many social rules are passionately broken. The show does a satisfactory job when it comes to moving supporting character arcs forward. The younger Bridgertons and fan favorites, like Lady Danbury (Adjoa Andoh), Queen Charlotte (Golda Rosheuvel), Featheringtons, and, of course, Lady Whistledown (voiced by Julie Andrews) embark on their own schemes and missions. If the main storyline bores someone, there’ll likely be another character plot that resonates more. There’s a variety of personalities to choose from.

More answers are provided for many burning questions lingering from the first season. The societal fabric comes unwound, as choices are made that can’t be unmade. There’s some suspense, humor and, of course, raunchiness to look forward to as well.

Hearing the orchestra play pop music covers once more is also a welcome return. The unique style of the show isn’t lost, as outfits and gossip remain the center-pieces for every occasion.

Finally, the overall themes of this season address grief, forgiveness, trauma, and deception. For anyone who loves another, there is a price to pay. It reminds each character that love can’t exist without emotional pain but, argues that a love match is ultimately a stronger force than duty and expectation.

Even the most stubborn people can eventually admit they’re wrong, especially when it means finding the happiness they’ve always longed for. These messages are important and connect well with Anthony Bridgerton’s initial approach to love and relationships.

Season 2 is exhaustingly repetitive without actually making much progress in the main story arc. There’s so much promise. Beyond the first episode though, things become very predictable and somewhat irritating.

With Daphne Bridgerton (Pheobe Dynevor) and the Duke of Hastings, Simon Bassett (Regé-Jean Page), things were just sexy and mysterious. There was no telling what would come of their relationship, as they went from strangers to crushes to it’s complicated, almost getting separated—then together again. There was the build-up, natural progression, and obstacles that they handled in messy and realistic ways.

However, Season 2’s romantic progression seems stunted as small pieces try to form a big picture that never quite comes together. It feels fast and forced, which ultimately takes away from the moments that are meant to be special.

While the first season was playfully unrealistic at times, this second installment goes above and beyond with scenes that are difficult to believe. There are actions, motives, and decisions that don’t make sense but drive the story forward in awkward ways. Relationships are tarnished when the conflict could have easily been avoided. Even the scandals are oddly placed. They operate under the assumption that virtually no one in a crowded building is paying attention to anything around them, even if it’s right in front of them.

Certain moments meant to be serious, feel as if they could give more. There are strides to create more multidimensional characters, but they don’t form enough intimacy, empathy, and connection.

There were a lot of characters to juggle this season while also following the Bridgerton book series. It’s tricky to cover everything in detail with such limited time and episodes, perhaps with more time to unpack things, Season 2 could have been a diamond. It’s got some shine but could have sparkled.

Bridgerton Season 2 isn’t terrible, but it isn’t wonderful. There are some engaging moments, themes, and scenes. However, there are annoying and repetitive components that can take someone completely out of it. It’s worth a watch but shouldn’t be on the top of the watch list. It’s easily bingeable, will hold attention, and may even open up some lively debates.

The second season of Bridgerton will drop on March 25th.