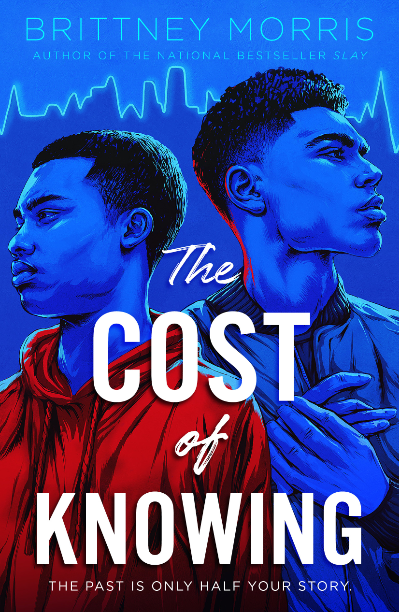 Synopsis: Sixteen-year-old Alex Rufus is trying his best. He tries to be the best employee he can be at the local ice cream shop; the best boyfriend he can be to his amazing girlfriend, Talia; the best protector he can be over his little brother, Isaiah. But as much as Alex tries, he often comes up short. It’s hard to for him to be present when every time he touches an object or person, Alex sees into its future. Alex feels these visions are a curse, distracting him, making him anxious and unable to live an ordinary life. When Alex touches a photo that gives him a vision of his brother’s imminent death, everything changes. With Alex now in a race against time, death, and circumstances, he and Isaiah must grapple with their past, their future, and what it means to be a young Black man in America in the present.

They say that knowledge is power, but what happens if you have knowledge and no power? Then knowledge can be considered a curse. So feels, Alex. He can see the future, but no matter what he does he is unable to alter it, no matter how hard or what he tries. He is left helpless to watch manifest his traumas and fears.

Full disclosure: at first, I was hesitant to read the book The Cost of Knowing because with everything going on I was reluctant to voluntarily put myself or subject myself to Black trauma. There is a sense of dread knowing that a young Black boy was going to die (even if it’s a fictional character). I guess that is my cost of knowing.

After reading this book I would put it in the same category as Roll of Thunder, Hear My Cry by Mildred D. Taylor or The Watsons go to Birmingham 1963 by Christopher Paul Curtis (both of which I read in my youth). These books told fictional accounts of lives akin to the stories my grandparents and great grandparents told me of their lives.

The Cost of Knowing by Brittney Morris is a reflection for my generation. Morris calls the book a “love letter to all the Black men who had to grow up too early.” In the afterword, Morris says that she started out to write a book about Black boy joy but didn’t feel it could be authentic without addressing the issues that affect these children as they journey to manhood.

Since this book is for crowds 12 and older, the trauma was not explicit. But it was comprehensive. The book addresses anxiety, mental wellness, toxic masculinity, intergenerational trauma, and advocates communicating big feels. Some of Morris’s choices of what is discussed in the book were a bit more mature than what I’m accustomed to reading in a YA novel, but I think her choice works because the entire theme of the book is how Black youth is shortened because they are made aware of adult situations before one might assume.

The limitations of Alex’s ability don’t bring the benefits that you would assume comes with being able to know what’s coming next. It quickly becomes a burden when he realizes that even with knowing, he can’t change the future. He is helpless, and his knowledge hints at the theme of the title. Alex pays with the sacrifice of his relationships with those closest to him and the anxiety that comes with not wanting to know and not being able to control it and always being bombarded with visions of the future.

Things are going to happen outside of your control but what you know of these things can change how it affects you. For fear of not being believed and also not knowing how to explain his feelings to others, Alex has been suffering for the last four years by himself in silence.

If you’re looking for a book to read that is an interesting story with magic realism, this will suffice. If you are like myself and you like to interpret the symbolism and the metaphors created by the author, this is also a good choice. For a read where the main characters of the story are POC and it does not hit you over the head with their “Blackness” or ethnic stereotypes, this is an option.

I think that it’s important for young children to see themselves represented in different roles, to let them to have something to aspire to open up a world of possibilities for them and also to provide them with a reference and let them know they’re not the only one suffering.

“Joy in the face of oppression is its own kind of bravery.” (The Cost of Knowing, Brittney Morris)

The Cost of Knowing addresses the knowledge of things that haven’t yet happened but probably will and the anxiety that this brings knowing that you have little control that over a situation. There’s also the “cost of knowing” your history and your legacy. The weight of the past can sometimes keep you from living in your present.

An added layer to the “cost of knowing” is us as the audience knowing what’s going to happen and also knowing the reality in which these young men exist. The reader has a similar experience to Alex, as we know that his brother is supposed to die soon. We don’t know any details, and we are taking this journey with Alex as he spends those last days with his brother knowing that his death is imminent but not knowing what to do with this information. There’s a couple of other nuances in there where again representation matters, though their older neighbor considers them to be “good boys” (the “for Black kids” is silent).

I appreciated Morris’s choice to display physical affection and vulnerability between the brothers. It was one of the few times I can recall it being displayed.

Because we don’t know how his brother will ultimately pass away, it creates a tension at every development in the plot. I can identify with the anxiety that exists when you have a young Black man in your life. Every time they leave your sight, you wonder if this is the last time you’re going to see them. How will the world perceive them if you aren’t there to tell them that he isn’t a threat? Or worrying about their well-being while they are doing typical things that are to be expected of a young man their age. I know Brittney Morris wrote this as a love letter to young Black man who had to grow up too soon.

You can enjoy this as a topical story or you can dive deeper into the themes if you so wish. A cool thing about this book is that depending on what you know as a reader, you will have a different understanding of certain interactions in the book.

Review: ‘SLAY’ by Brittney Morris is a Raw Depiction of Black Identity