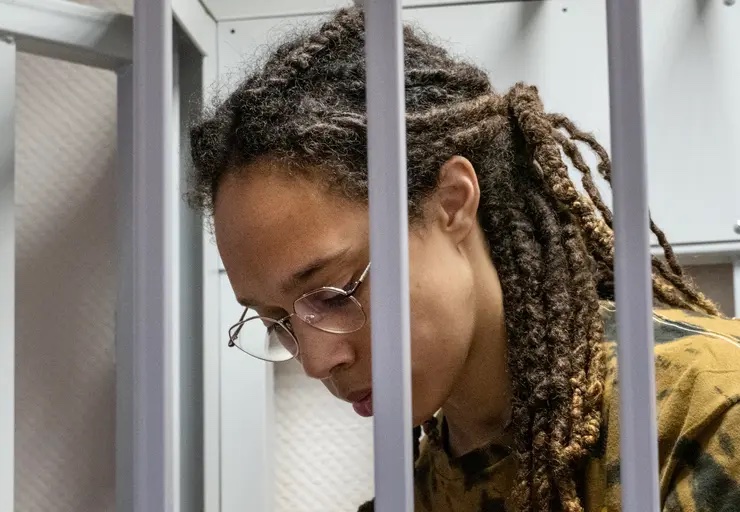 It’s been a few days since WNBA star Brittney Griner was sentenced, and we’ve all been wrestling with what has happened. For over five months, Griner has sat in a Russian prison after being arrested on February 17 for having two vape cartridges in her luggage.

Russia has one of the most repressive and exploitative prison systems in the world, with disproportionate drug policies against marginalized populations. They also have strict laws against the LGBTQ community and make it known that they equate being gay to being a pedophile. Knowing this, we knew it would not be easy getting Griner out of there. The war between Russia and Ukraine went full force one week after her arrest. People were urged not to make public pleas for her release since it might ruin a possible back-channel negotiation.

Griner immediately became a political pawn. According to the Associated Press: “Russian news media have repeatedly speculated that Griner could be swapped for Russian arms trader Viktor Bout, nicknamed ‘the Merchant of Death,’ who is serving a 25-year sentence in the U.S. on conviction of conspiracy to kill U.S. citizens and providing aid to a terrorist organization.”

During sentencing, Judge Anna Sotnikova said she had found that Griner intentionally broke the law and sentenced her to nine years. Griner repeatedly claimed that it was not intentional; a mistake in her rushed attempt to pack and make it to the airport. As she was led out of the courtroom, Griner said: “I love my family.”

Let’s be crystal clear. Brittney Griner is in this situation mainly because she is a Black, gay woman. We can’t ignore that. We must stop giving America the satisfaction of continually pushing truth to the side and just call things out for what they are. It’s not right.

I’m having a hard time with this, as critics call Griner “un-American” and celebrate that she got what she deserved. Even Donald Trump added his usual ignorance by calling her spoiled. The hate that people are showing towards Griner is not new. The truth is this is about how society treats Black women athletes.

Black women, in general, are treated as if we’re not enough. In the sports world, when a Black woman athlete is in violation of rules (sporting or social), they face harsher consequences. Period. There is this immediacy to put her in her place; silence her; destroy her.

When we talk about dominant Black women in sports, Simone Biles immediately comes to mind. Yet when the conversation comes up about whether she really is among the greatest athletes of all time, her accolades receive criticism.

Simone Biles once wore a goat on her leotard because, yes, she is indeed the G.O.A.T. Instead of rising to her occasion, the judges downgraded her scores because she was whipping out moves no one had ever seen before. She was punished for exercising her talent.

Black women athletes are indeed more than enough, and simply can’t be denied. That’s why it requires so much effort and calculation to disrespect, discredit, and hate them.

Aliyah Boston is a college basketball player for South Carolina. Not just any player but the most dominant player in both men’s and women’s college basketball. Even though Boston was nominated for the best college athlete in women’s sports award, she wasn’t invited to the ESPYS ceremony. They claimed it would be limited space and made no plans to even show the award she was nominated for.

I remember watching this on television last year. When Paige Bueckers won the award for best college athlete in women’s sports, she used her acceptance speech to lift Black women. “With the light that I have now as a white woman who leads a Black-led sport and celebrated here, I want to shed light on Black women,” she said. “They don’t get the media coverage that they deserve. They’ve given so much to the sport, the community, and society as a whole, and their value is undeniable.”

South African runner Caster Semenya took track and field by storm when she was just 18 years old. But after she won the gold medal during the World Championships in 2009, there was controversy about her speed and appearance. Then the questions about her sex and gender followed. She was forced to undergo gender testing to prove that she was indeed a woman. Semenya has a condition known as hyperandrogenism, which results in her body producing higher levels of testosterone. As a result, she was required to take medications to reduce her naturally occurring testosterone levels. She had no choice if she wanted to compete. Her body was targeted in such a vicious way, simply for existing.

On July 19, 2022, Joe Biden signed an executive order to “bolster efforts to bring home American hostages and wrongful detainees,” even declaring a “national emergency” to bring attention to the matter. None of this helped Brittney Griner.

What we hope is that Griner’s attorneys continue to exhaust every possible effort, including an appeal, to bring her home. That somehow, some way, Biden’s words have action behind them. We pray for strength over her family, friends, and teammates.