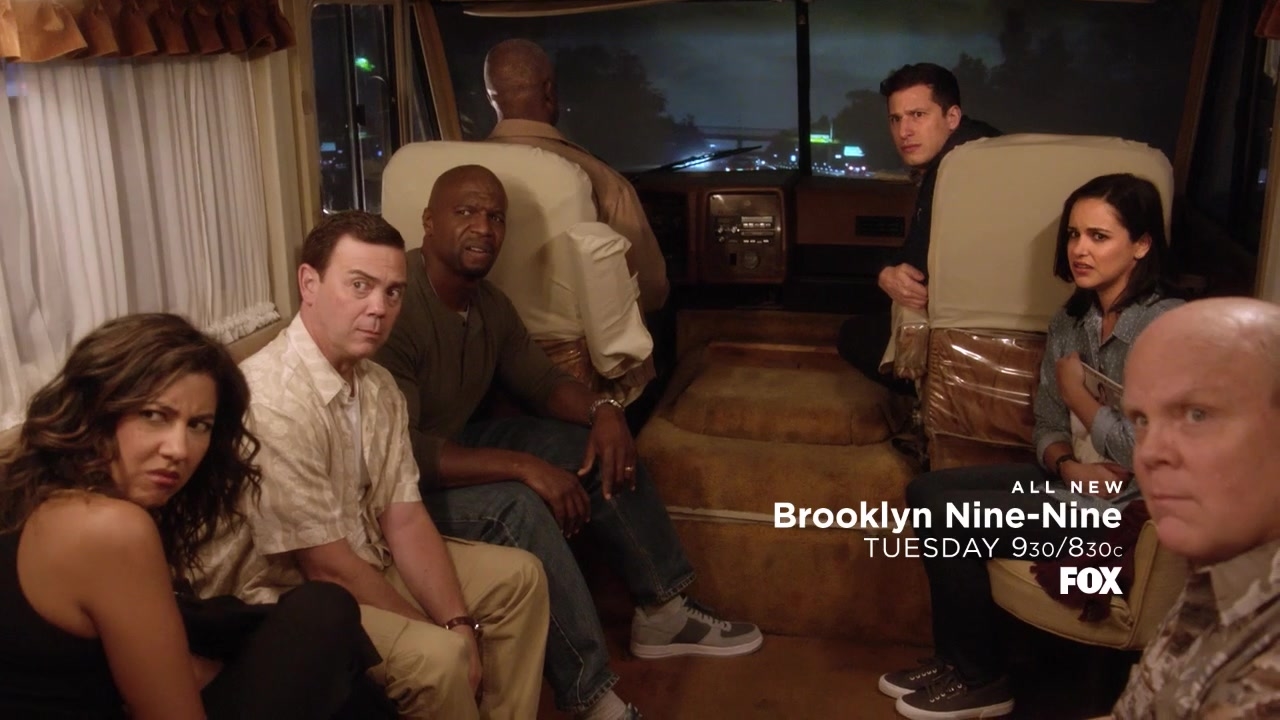 It’s the 99th episode of Brooklyn Nine-Nine and the team spends the entire episode not in the precinct, which I suppose is a reference to the idea that home (or work establishment) is a people, not a place. Basically, THEY are the Nine-Nine.

Lord High Commander of All Justice

The gang heads to LA to attend the funeral of their former captain. While they are there another police officer tells Raymond he’s on the short list for commissioner consideration. The squad (especially Jake) is excited and is willing to do everything they can to make sure he gets there on time. On the way to the airport, they pass Nakatomi Plaza (a building in Die Hard). Jake fanboy spirals, so they stop, allowing him to bask in the glory that is his favorite movie. They go up to take a bunch of (600) pictures but get locked in the building and must wait for the security guard to come back and let them out. When they get to the airport, they find out they missed their flight and all the other flights have been canceled due to a storm in the Midwest.

Through a series of trial and error, they decide to drive cross-country in a really shitty RV. While everyone takes turns driving, Charles tries to figure out (to no avail) who Rosa’s new bae is. A couple of hours into their journey, Jake realizes that the speedometer is broken, and they’ve been driving too slow. The engines can’t handle the high speed, however, and the RV starts smoking. After they all get off so he can check out the issue, it blows up, leaving them stranded.

Luckily for them, there’s a Boyle in each state and Charles’ cousins are about 30 minutes away. They stay the night and try to get some sleep even though they’re next to a stud farm (lots of cow sex, y’all). While they’re staying there Charles discovers that Rosa’s bae is a girl (::screams in the key of bisexual Rosa Diaz::). She promptly tells Charles to go away and mind his business.

Meanwhile, Jake is still determined to get Captain Holt to this interview, and he finds a way for them to take a cargo plane to New York. They borrow the Boyle’s infinite khaki wardrobe and head toward the airport. On the way there, they get pulled over by the police because someone called in a left a tip that a truck like the one they’re in was smuggling drugs. Them being pulled over causes them to miss their plane (again) and Jake realizes that Captain Holt has been sabotaging them the whole way back to New York.

After some prodding and disbelief, Captain Holt admits to sabotaging their mission because he’s been compromised due to his deal (see episode two) with Seamus Murphy. Jake and Rosa (and me tbh) are touched that Raymond would sacrifice so much for them, but they are still determined to get him to the interview and assure him that they will deal with Seamus Murphy.

Amy, who’s been trying to “play it cool” this entire episode is asked to pick up her high-strung mantel so she can make a plan and get them all back to New York in time for his interview, which she obviously pulls off without a hitch.

I didn’t recap Charles finding out Rosa is bi separately because it was such a big reveal and I feel like I would probably spend all my time analyzing instead of recapping.

The actress who plays Rosa (Stephanie Beatriz) is bi in real life, and this episode premiered on December 5th, the anniversary of the Bisexual Pride Flag. In an interview with GLAAD, Beatriz commends the writers for reaching out to her and others in the community to make sure they tell this story right, and their effort is made obvious throughout the episode. Rosa coming out is exciting because she’s such a great character with so much depth, and for many members of the LGBTQIA community (including my friend, Allie) it’s great to see themselves represented in a realistic way.

“Smart, well respected, you smell great. That has nothing to do with the job, just something I’ve been meaning to tell you. Is it Sandalwood?”

“And we should get summers off like teachers, let the city go to purge”