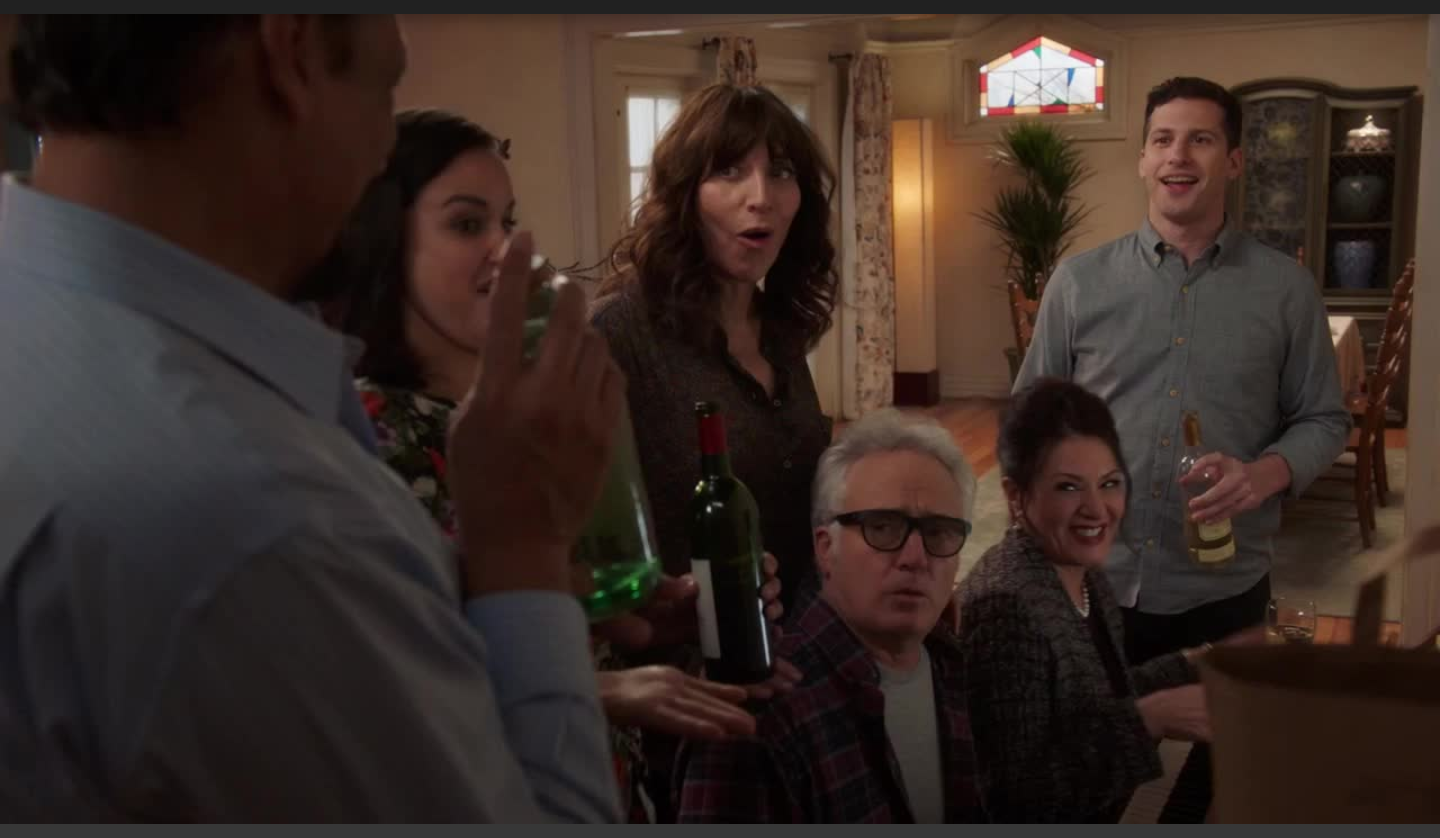 This week’s episode of Brooklyn Nine-Nine is a meet the parents Thanksgiving type affair, with some detective work sprinkled in, because this is a cop comedy, people.

The precinct is getting ready to leave for their respective Thanksgiving plans when Kevin and Captain Holt come back from Saratoga Springs to get their favorite pie (it’s better than a plain scone). Kevin leaves the pie in Captain Holt’s office; the Captain goes to a meeting and when he returns, the pie is gone.

He deduces that either Rosa, Terry, Boyle, Hitchcock or Scully took his pie (essentially the five cast members who are in the precinct) and demands that no one leaves until someone confesses. He then proceeds to apply serious police-like measures to find the culprit (including marking off his desk as a crime scene and interrogating his suspects). Despite his best efforts, Raymond is unable to get a confession, or his pie back.

Because Hitchcock and Scully are too lazy to pull off this heist, Captain Holt asks them to help him find the pie, using their expertise in food. While they search, he interrogates Terry, Rosa, and Boyle again because he discovered they lied about their previous alibies. They all confess to lying, but not to the theft, and Holt is about to really lose it when Hitchcock and Scully reveal they found the pie, gently placed in the garbage can.

Holt reveals what I knew all along, Kevin is the one who trashed the pie (in full honesty he was my second guess, but close enough). Kevin admits that he thinks the pie is gross and he couldn’t take that home for fear of being made fun of, but he didn’t want to hurt Raymond’s feelings, so he tossed it. He also confesses that he enjoys the yearly trips to Saratoga Springs when the trees are skeletal, and they sit in silence. Raymond suggests that they just take the trip anyway, and Kevin is intrigued by this spontaneous idea.

Jake and Amy are preparing to have Thanksgiving with both of their families. Their parents don’t really have anything in common, but the two have done their research and have compiled a list of conversation topics in case things go south.

Things go south real fast, as expected, and the conversation topics are useless. Hoping to make matters better (but truly making them worse), Peraltiago adds alcohol into the mix, and for a moment it works. Everyone is cheery due to their lowered inhibitions until the dads’ competitive nature kicks in and ruins everything. Their fighting causes Jake and Amy to fight and ends with Roger (Jake’s dad) cutting off his thumb. Parents… or good parents, tend to step up when a crisis arises, and that’s exactly what Mr. Santiago does. He uses his cop voice to make sure Roger gets seen right away. Everyone realizes they were acting a fool and makeup, giving us, the awkward dad hug Jake always wanted.

A hysteric Captain Holt is always fun to watch, and this episode doesn’t hold back. I love that they touched on how Rosa’s time behind bars has affected her relationship with her family. I also think it’s weird that it wasn’t brought up when Jake was with his, but I suppose with all that happened it fell by the wayside.

Bradley Whitford (shout out to West Wing) is always a delight, even when he’s playing a reprehensible character.

Hitchcock and Scully’s detective work to deduce that Captain Holt was holding a pie is the best I’ve seen all year, and I’m reading my way through New-52 Batman.

Does anyone on this show say Nikolaj correctly?

Terry: “I just didn’t want you guys to know what a horrible dad I really am!”

Captain Holt: “Well now we do”