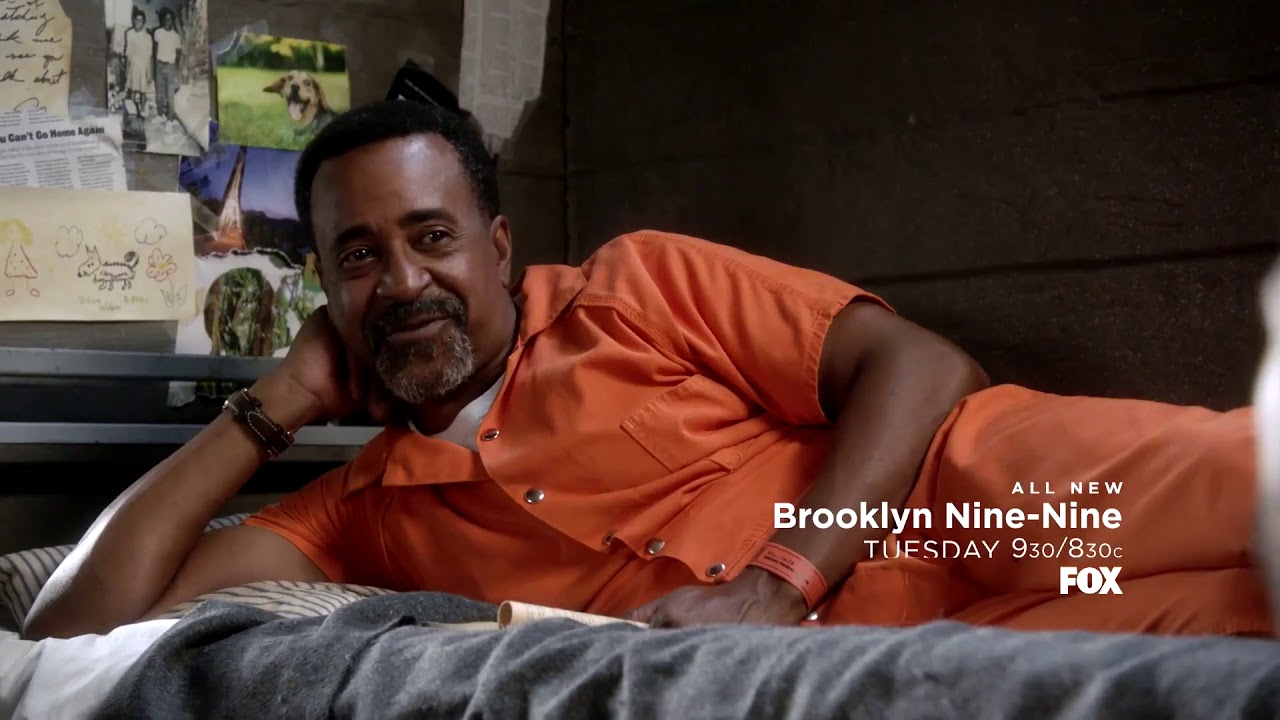 We open this episode of Brooklyn Nine-Nine with Jake being put in the hole (street talk for solitary confinement) for spitting a cookie in a guard’s face, which is impressive to the prisoners but to me is a waste of a perfectly good cookie. As he’s being thrown in solitary it turns out his act of rebellion was planned so he would have time to give the Warden an update on Romero.

Jake tells the Warden about a delivery Romero is coming in soon and as a thank you, he gets to spend five days in solitary to save face. Jake’s five days end and he’s sent to the warden’s office where he chastises him because his tip was a bust. There’s nothing in the shipment but toiletries. The warden demands that Jake figure out where Romero is hiding his drugs or he’ll out Jake as a snitch.

Jake tries to get closer to Romero, but he shuts that down and gives him a step by step guide of what he does with snitches (it involves a lot of death). Jake decides that he’s going to use his police skills to find the drugs (because duh) and figures out low key by accident, that the drugs are in the soap.

Jake tells the warden about what he learned and leaves his office hoped up on Blizz (formally known as meth). Romero notices that Jake is coming out of the warden’s office and questions him. Impressed that he could face the warden high on meth, Romero agrees to let Jake in the inner circle of his drug ring, much to Jake’s dismay because Romero will link his incoming confiscation to Jake’s newfound knowledge and promptly castrate and kill him.

Jake’s fears are correct, and Romero confronts him out in the yard. He goes to shiv him, but like a real friend Caleb steps in between them and saves Jake. Jake is released from prison (and death) because Hawkins is arrested (see below). Before he leaves, Jake stops by and thanks Caleb for saving his life. Caleb responds by trying to eat him.

Amy is in the library judging the shelving of the books to release stress when she’s approached by Seamus Murphy, a nefarious gangster who tells her he can get her proof about Hawkins, but she’ll owe him a favor.  She tells the team about Seamus’s proposal and they all agree it’s a bad idea. She’s distraught because she thinks they’re running out of time and ideas but they refuse his offer anyway.

Holt suggests they use Seamus’ tip about the diamonds to catch Hawkins. Amy realizes that Hawkins has two phones, and the 99 tries to figure out a way to get a mirroring app on her phone to see what she’s up to. Charles suggests that they get her to visit prison because they make you leave your phone outside. They ask Rosa to request a visit from Hawkins so they can put the plan in place, but she refuses because she hates her.

After persuasion for Holt and Amy, Rosa agrees but she gives them a time limit of three minutes because if she must talk to Hawkins any longer she’ll snap, break through the glass and kill her. They execute the plan perfectly, but Hawkins is on to them and when they go to bypass her pick up they find out it’s a diversion.

Later, Captain Holt says he realizes something odd about Faxton Hill Farms and they go to check it out. Terry finds the missing diamonds in the pigs and they manage to arrest Hawkins. The squad celebrates Rosa and Jake’s freedom, but it’s revealed to us that Holt cashed in on Seamus Murphy’s information and now he owes him a favor.

The second half of The Big House, ended a little rushed just as I expected it would. Jake’s departure felt a little chunky, and I know I said last week I enjoyed them not deep diving into Rosa’s time in prison, BUT I felt like this week the show was lacking Rosa screen time. The fact that Hitchcock knows what Snapchat is and uses it regularly feels like one of those jokes I as a millennial am supposed to find annoying but personally, I’m enthralled by it, if not a little skived out.