“There is no comedy without courage.”

This was just one of many thoughtful comments from Terry Crews, star of Fox TV’s Brooklyn Nine-Nine, who sat down to a creatives lunch about tonight’s episode. In “Moo Moo”, Crews’ character is stopped by a fellow police officer for what amounts to “Being in a Nice Neighborhood While Black” while looking outside his home for his daughter’s security blanket. Co-Creator/Executive Producer Daniel J. Goor and writer/Co-Producer Phil Augusta Jackson joined Crews to answer questions about how they decided to approach such a sensitive and controversial subject.

Crews’ words encapsulated the point of view expressed by both Goor and Jackson. Goor stated they wanted to tackle the subject of racial profiling for three years. They felt that the show was in a unique position to look at the issue from the standpoint of Crews’ role as Sergeant Terry Jeffords, a cop who is also a Black man and a father.

Crews expanded on the choice to take on serious subjects with comedy: “For me, comedy is the best way to deal with really serious subjects. The best comics in the world, from Richard Pryor to George Carlin to Dave Chappelle, the harder and more difficult the subject matter, the funnier they can make it.” 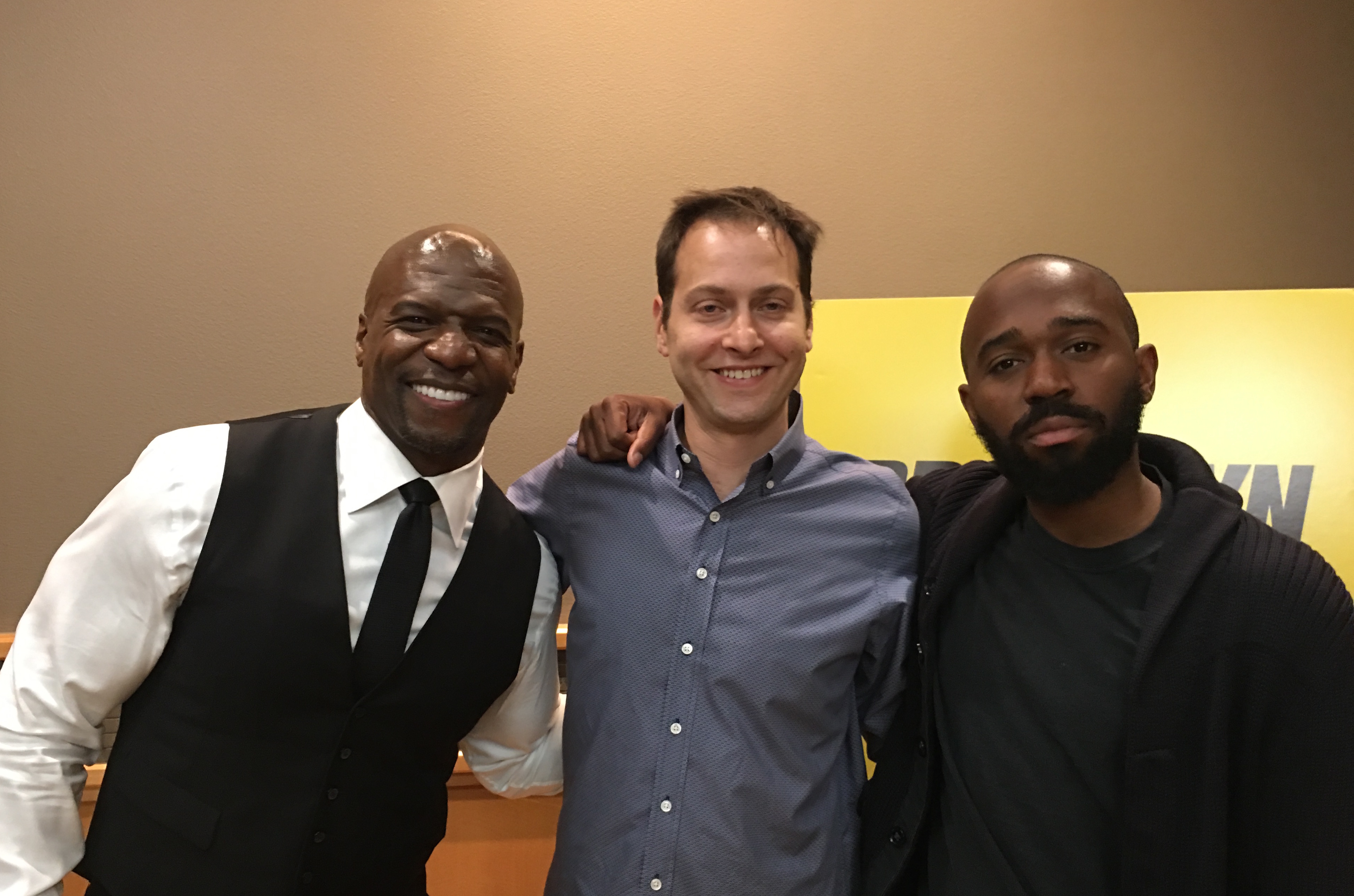 Goor and Jackson’s approach was to make sure the writers kept the seriousness of the subject matter at the forefront while using that to inform the decision as to whether a comedic moment was appropriate for a scene. Also, the personal experiences of Crews, Jackson, and Andre Braugher (Capt. Ray Holt) as Black men in America kept the scenes grounded in reality. The actors “were very much partners in this,” said Goor.

Jackson said during filming there were times when emotions rose unbidden to the surface, forcing the cast and crew to take a minute. “There was a moment on set, when Terry was talking to Holt in his study, where everyone on the set was just, in

“There was a moment on set, when Terry was talking to Holt in his study, where everyone on the set was just, in it… you could just feel that it was going to be something special. Andre and Terry were just so locked into that scene and it made me think about certain circumstances that I’d been through. I think that is the sign of an episode, that it strikes a chord.”

Jackson answered the question of whether there was a concern about the good intentions of the episode being misinterpreted, saying (of course) they were aware of the possibility. They felt that they were on the right side of the issue and that, though they were walking a tight-rope, it is sometimes necessary to take the opportunity to speak to the issue anyway.

“I think those are the risks, as an artist, you have to take.”

Check out the teaser for tonight’s episode below:

Terry Crews – (Sergeant Terry Jeffords) – A former NFL football player, Terry Crews traded in his helmet to pursue an acting career and become the ultimate family man and fitness enthusiast. Since retiring from the NFL in 1997, Crews has landed roles in Friday After Next, White Chicks, Idiocracy, Bridesmaids, The Longest Yard, Blended, and The Expendables 3, with Sylvester Stallone and Bruce Willis.

On television, he has starred on shows such as Are We There Yet?, Everybody Hates Chris and The Newsroom, as well as on the reality series The Family Crews. He also received rave reviews for his comedic performance in the return of Arrested Development.

Crews recently hosted the FOX unscripted series World’s Funniest, as well as the syndicated Who Wants to be a Millionaire. Additionally, he is the spokesman for Old Spice’s award-winning “Smell is Power” campaign. A true renaissance man, Crews has entered yet another field and has inked a book deal with Random House Publishing.

He lives in Los Angeles with his wife, Rebecca, of nearly 25 years. They have five children.

Daniel J. Goor – (Co-Creator/Executive Producer, BROOKLYN NINE-NINE) – Goor is the co-creator and showrunner of the Golden Globe-winning comedy Brooklyn Nine-Nine. Prior to that, Dan was an executive producer and writer on the critically acclaimed comedy Parks and Recreation. Goor got his start writing for The Daily Show with Jon Stewart, for which he won an Emmy Award in 2001. He also won an Emmy Award in 2007 for his work on Late Night with Conan O’Brien. He resides in Los Angeles with his wife, Purvi, and their two daughters, Zoe and Mila.

Phil Augusta Jackson – (Co-Producer) – Phil is a performer, writer, and musician originally from Yardley, Pennsylvania. He began studying at UCB in New York in 2009 and is a proud performer and teacher at the theater. His writing credits include Comedy Central’s Key & Peele, Survivor’s Remorse on the Starz Network, and Fox’s Brooklyn Nine-Nine. He’s received Emmy, WGA, and NAACP award nominations for his contributions on Key & Peele.