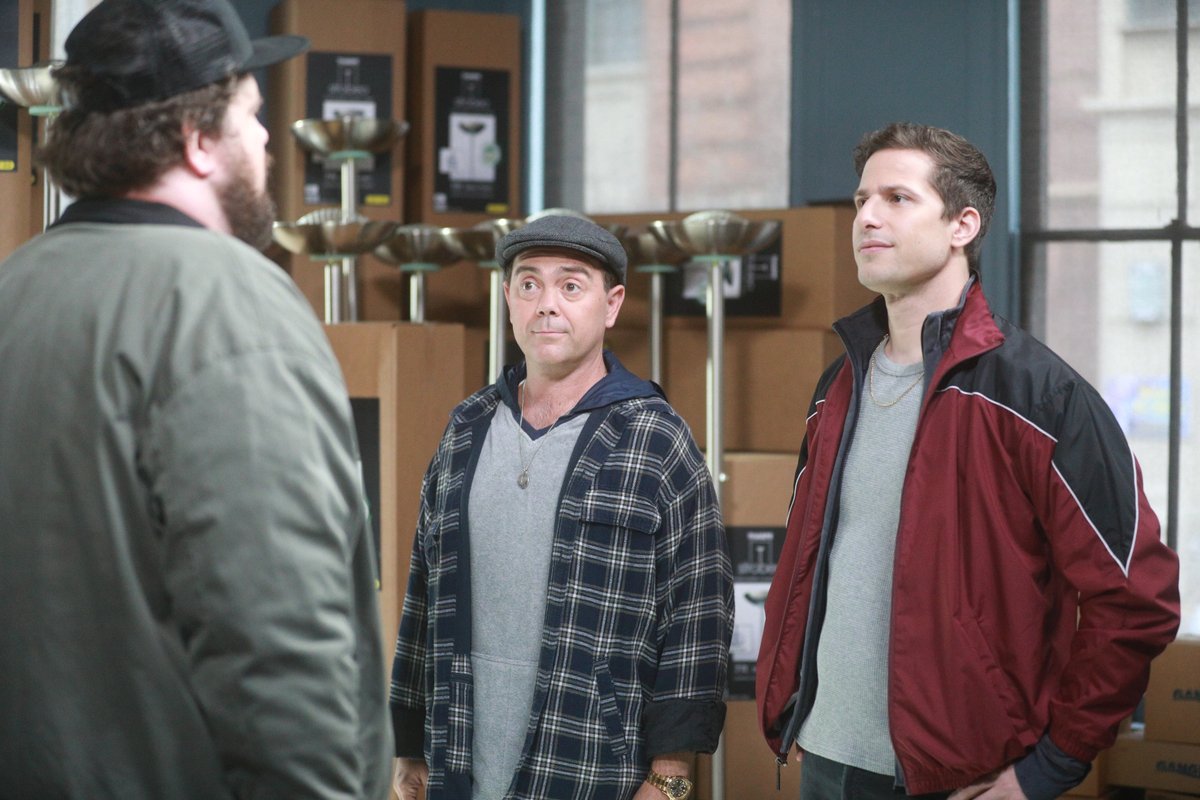 It’s two for one recap day here at the BGN Brooklyn Nine-Nine recap corner because they aired two episodes at once. It’s also the mid-season finale, so a lot of loose ends are wrapped up.

We start the episode close to where last week’s ended, except this time, Rosa comes out to the rest of her coworkers. After 50 seconds of answering personal questions (Hitchcock ruins it for everyone), Rosa leaves the meeting. Later she and Jake chat and she admits she hasn’t come out to her parents yet.

He tries to coach her through it (making me think Jake has done this before) but instead, Rosa tries to trick Jake into doing it for her by inviting him to dinner with her parents. But, her parents just end up thinking Rosa is dating Jake. Rosa goes along with it until Amy calls her fiancé exposing their lie.

Instead of questioning what’s going on, her parents just assume she’s Jake’s mistress which is somehow better than her being gay. Frustrated, she comes out and then promptly leaves the restaurant.

The next day, Jake checks in on her and she tells him her parents called after they left, and everything is all good. As an apology for their behavior, Rosa invites Jake to family game night.

Unfortunately, it’s gotten worse. Rosa’s parents think she’s going through a phase and therefore complete dismiss her identity and her sexuality. She goes off on them (because duh) and they get in another fight that Jake gets to pay witness to… again. They both leave, and Rosa’s broken about the whole thing. The next day, her dad comes to talk to her; he’s thought about what she said and wants her to know that he loves her no matter what.

Meanwhile, the cybercrime unit has moved in downstairs and has taken all the WI-FI with them. Terry and Captain Holt go to ask for some of it back, but since they know nothing about technology or the internet, they get laughed out of the room. Stressed because the internet is getting worse, they reach out to Gina because she’s the only one they know who can scare the cybercrime unit into giving them back their things (I guess Rosa was busy). She refuses because she’s busy (being a mom and starting her own business) and lets them know she won’t be returning to the 99 at all.

Charles and Amy go to drop off Gina’s stuff and try to get her to reconsider quitting, but she turns them down, and they must figure out how to get back the internet on their own. They decide to bribe/seduce their downstairs neighbors with meat, but it doesn’t work. Until it’s revealed that Gina was there to help all along. The crew gets the internet and our favorite Captain’s assistant back.

Captain Holt is chilling at a diner when Seamus Murphy stops by to collect his favor, a permit for a block party. Captain Holt doesn’t want to give it to him because he’s afraid Murphy will use it for something dastardly. Jake and Charles decide to investigate to see what Seamus’ intentions truly are, but first, they must go undercover to get close to Seamus’s nephew, Kyle. Using a bunch of Godfather references that I don’t understand (I’ve never seen The Godfather), Jake and Charles deduct that due to his gullibility, Seamus’s estranged nephew is their best way to figuring out his plan.

Once Jake and Charles get to know him, they realize Kyle’s just a doofus who’s trying his best. However, he does (barely) help them get the information they’re looking for and they’re able to stop Seamus Murphy’s plan, setting Captain Holt free from his grasp. Or so we think.

Jake finds out that Seamus is going to kill Kyle because he knows that his nephew was the reason his planned were thwarted. Jake wants them to protect poor dumb Kyle and because they’re both good people, Captain Holt agrees to put him in protective services. Seamus finds out and promises Captain Holt he’ll return the favor by coming for Kevin.

Two episodes at once, what a blessing! As two individual episodes, these were fine, I think ‘The Favor’ (or as I call it, Team Bigfoot) was the stronger of the two episodes as it brought a lot of things into place, and set up the rest of the season.

Honestly, and maybe it’s because I have to recap these, we didn’t need two episodes this week. ‘Game Night’ could have premiered at the beginning of the midseason, it felt like the writers felt pressured to flesh out Rosa’s storyline right away instead of letting it fall where it may.

I didn’t recap the B-plot of ‘The Favor’ because it was boring, even though I was delighted to see Amy go full nerd. I also didn’t see myself connecting with Gina dealing with being a working new mom, but that might just be because I don’t have (or want) kids. (Captain Holt’s analysis of babies is exactly how I feel.)

I also noticed that the director of this episode was experimenting with implementing improv through this episode, there were several jokes that landed, but were assessed by the cast and the crew a little awkwardly.

I was a little upset that in “Game Night,” Jake and Rosa didn’t get to tell Gina goodbye —even though she came back.

I NEED to know what happened at the Sex Crimes Christmas party!?

Shout out to Captain Holt and Charles for helping Jake birth a brain baby, I’m naming her Briana.

“All music after Mahler (the composer) sounds like that (incomprehensible rapping)”

“No! Sherlock wants a present!”

“They were not, as the kids would say, awake”