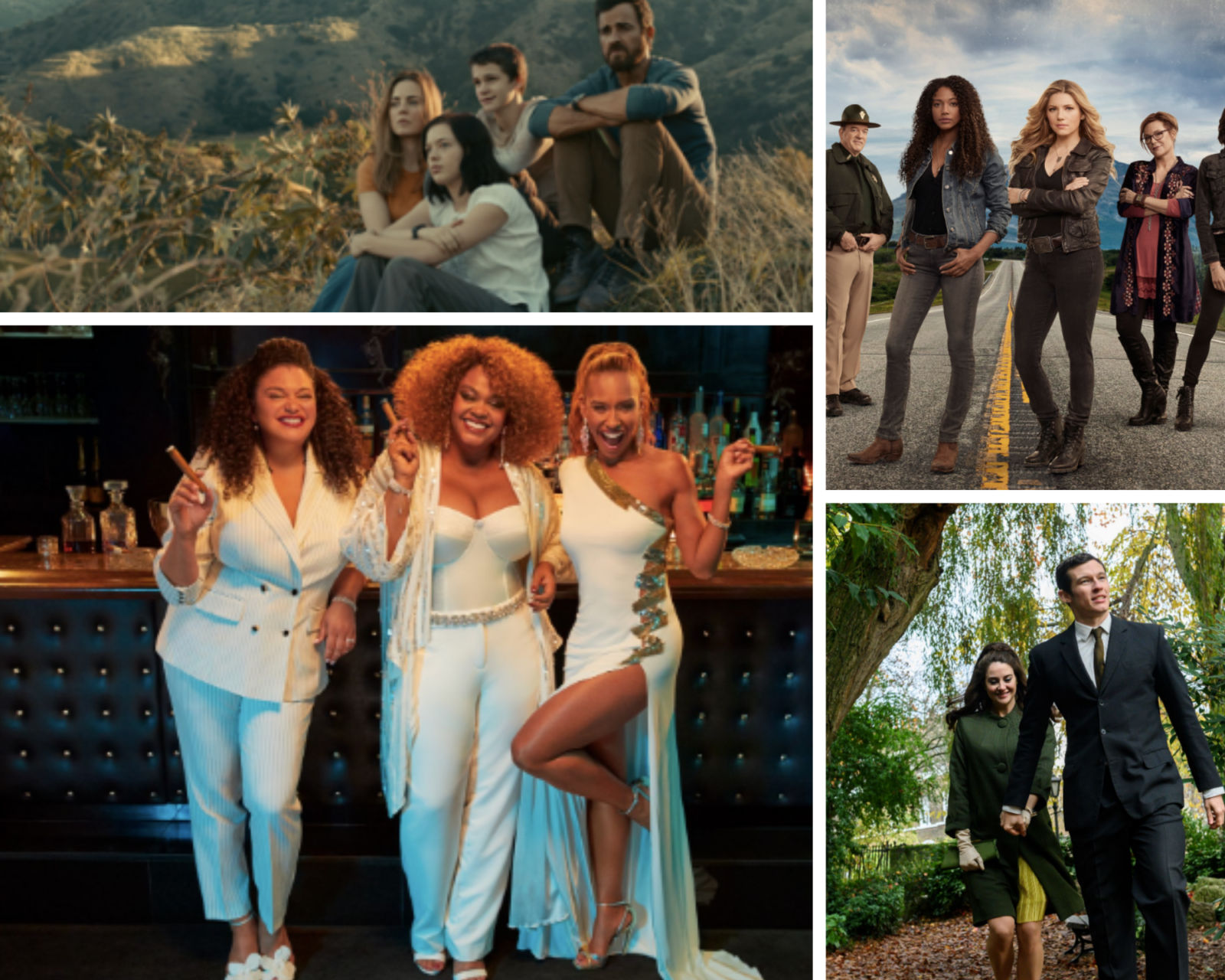 Ever wonder how many movies and TV shows are crafted from books? If so, trivia game night could be a fun one. Recent TV offerings include Lovecraft Country, The Queen’s Gambit, The Underground Railroad, Queen Sugar, Orange Is the New Black, and of course, Games of Thrones. Below are a few more.

Big Sky is based on The Highway, one in a series of three popular, hard-hitting crime novels by writer C.J. Box in which minor and major characters are just as likely to get bumped off in the wide open Big Sky area of Montana.

The ABC series has a strong Black lead in Kylie Bunbury (Pitch, When They See Us). Bunbury plays Cassie Dewell, partner in a detective agency with her best friend Jenny Hoyt (Katherine Winnock) who is separated from her husband Cody (Ryan Phillipe). For those who have not seen the series, Cassie and Cody are dating.

Meanwhile girls and women are being snatched off the highway, later killed or trafficked, and the detectives think law enforcers in a nearby town are involved. Since Big Sky has been renewed for a second season, expect to see more of Bunbury fighting crime while battling her personal life.

Apple TV+’s Mosquito Coast series and the 1986 movie are both based on a 40-year-old book of the same name by travel writer Paul Theroux. Allie (played by real-life nephew, Justin Theroux) an eccentric genius inventor who, for some reason, lives off the grid with his wife Margo (Melissa George) and two kids (Gabriel Bateman and Logan Polish) realizes (once again) that he and his family are being watched.

They aren’t just being watched, they are being followed by what seems to be the local police, government agents, and a drug cartel. The draw about 25 minutes into the first episode is whether the audience cares about why this is happening. What did Allie do to bring this down on him and his family?

If interested, this is a middle-of-the road mystery seen from the POV of Allie’s teenaged son, Charlie. While Charlie clearly adores his dad, he is both frustrated by and compassionate to his father’s problems. He clearly understands his father’s fierce ways of protecting his family while also seeing his father’s denial about the toll it takes on them. Look for Kimberley Elise as one of the government agents on their trail and Emily Chang as the by-the-book local police officer also keenly involved.

Want to forget your urban living and move where there’s little traffic and everyone knows your name? Netflix’s Virgin River is based on a series of books by romance novelist Robyn Carr. Although slow moving, Virgin is filled with funny and dramatic plot twists to keep a viewer interested, but the draw is whether the fantasy of foliage-lush, small-town living and meeting a stable guy with a decent income (in this case he owns the most successful restaurant/bar in Virgin River) appeals.

Nurse practitioner Melinda (Alexandra Breckenridge) moves from Los Angeles to start over after losing her child and her husband. She just wants peace and the new job she was hired for, but the place she has bought doesn’t look like it did in the picture (let’s not talk about buying a property without seeing it, that’s for another article) and the doctor (Tim Matheson) she is to work for claims he didn’t hire her. It turns out the local mayor (Annette O’Toole) did.

What to do? Drown your sorrows at the local watering hole and meet Jack, the man (Martin Henderson) of your dreams. Only Melinda is still in mourning and there are many other problems (of course!). Look for Brit actor Colin Lawrence as John aka “Preacher” Middleton as the romantic restaurant cook who’s also an old army buddy of Jack’s.

Revenge is sweet and continues to be in BET’s all-Black cast version of the late author Olivia Goldsmith’s dishy look at divorced first wives laughing last. This one stars Jill Scott, Michelle Buteau, and Ryan Michelle Bathe. The 1996 film version starred Goldie Hawn, Bette Midler, and Diane Keaton and focused on the revenge the ladies got on their husbands. This time it’s more about how these characters evolve into independence and freedom. Both versions evoke the fierceness of friendship and sisterhood.

The Last Letter from Your Lover (Netflix)

New on Netflix this month, The Last Letter from Your Lover is based on a novel by JoJo Moynes and travels back in time. Sixty years ago, a woman (Shailene Woodley) gets in a car accident, and when she wakes up and can’t remember a thing. Someone (Callum Turner) wrote her a letter asking her to leave her husband (Joe Alwyn). In the present, that letter is found in the morgue of a newspaper by Ellie, a journalist (Felicity Jones), and the unraveling of a mystery filled with romance begins.

Ellie hopes that finding this romantic relic might be the spark that helps her own love life. Also are these two now senior lovebirds even still alive? Look for Ncuti Gatwa (Sex Education) and Ann Ogbomo (Zack Synder’s Justice League).

Lady in the Lake (Apple TV+)

Lupita Nyong’o and Natalie Portman have been announced as the leads in this “limited series’ just announced by Apple TV+. Lake is based on the New York Times bestseller by Laura Lippman and is also a period piece, this time Baltimore in the 1960s. Maddie Schwartz (Portman), a divorced mom and investigative reporter, is on the trail of an unsolved murder that eventually leads her to Cleo Sherwood (Nyong’o) a passionate Black community civil rights leader.

Apple TV+’s The Last Days of Ptolemy Grey should debut soon and is based on the book by Walter Mosely (and if you like mysteries, especially those set in LA, and you don’t know who Walter Mosely is, please google him), and stars Samuel L. Jackson, Dominique Fishback (Judas and the Black Messiah), Damon Gupton (The Divide, Criminal Minds), Marsha Stephanie Blake (Orange Is the New Black), Omar Benson Miller (Ballers), Walton Goggins (Justified, The Unicorn), and Cynthia Kaye McWilliams (Bosch, Prince of Peoria). Ptoloemy concerns an old man who finds the elixir of life through a mysterious doctor and as a result is able to work on solving his grandnephew’s murder.

Based on the New York Times bestselling book by Liane Moriarty, the series will debut on Hulu on August 18, and is set at a mysterious spa where nine people go to de-stress from their troublesome lives but are in for … a surprise. This might be good if you liked Big Little Lies or The Undoing since it’s co-produced by Nicole Kidman’s production company and co-written for television by David E. Kelley. In addition to Regina Hall, Melissa McCarthy, and Kidman, the cast includes Bobby Cannavale (Boardwalk Empire) and Luke Evans. Also, look for Tiffany Boone (Hunters) and Manny Jacinto (The Good Place).

Adapted from the Best-Selling Novel, ‘The Mosquito Coast’ Comes to Apple TV+