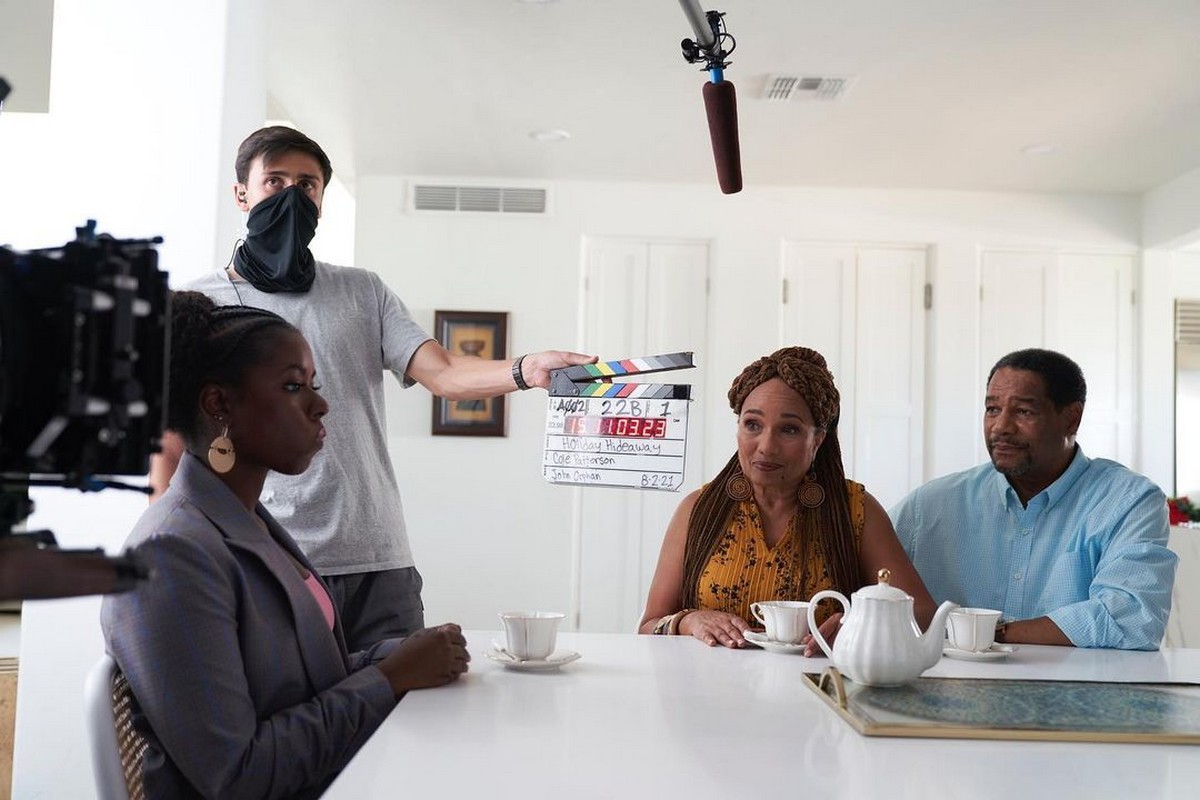 Who doesn’t love a holiday movie? Something about wearing your warmest duds, cuddling up with a blanket, and just relaxing as a group of characters navigate their way through the snow … to love … just feels right. And I’m not the only one who thinks so. Every year women in the 25–54 age demographic constitute nearly 36 million viewers during the holidays. The rise in production of holiday-themed movies seeks to quench a thirst that had long been left to just a couple of TV channels. Now more services are producing holiday movies that are diverse and naturally inclusive.

Holiday Hideaway was envisioned by Sharon Brathwaite, an actress, writer, and producer who starred in Think Like a Man. The Black female excellence extends to the production team and continues with director Cole Patterson, who started out as a make-up artist before redirecting her focus to directing full time. Patterson’s goal is to bring an “innovative and fresh perspective to the world of filmmaking,” and it sounds like Holiday Hideaway fits the bill.

Holiday Hideaway follows Carly (Camille Winbush), who is described as “the queen of holiday celebration.” However, when mixed with an assertive Type A personality, stress from her job, underappreciation by her family, and misunderstanding by her boyfriend, it was only a matter of time before her emotions boiled over. An incident happens that causes her to need to get away and regroup. Her boss, Angela (Vivica A. Fox), gives her a timely opportunity, and she ends up at a whimsical locale called the Tea & Rose Inn. There, the lovely owners, Rose (Ella Joyce) and Thomas (Dan Martin), help her rediscover herself and the true meaning of the holidays.

BGN had the pleasure of Zooming with stars Camille Winbush, Vivica A. Fox, Ella Joyce, and director Cole Patterson to discuss the film.

When I heard about the movie, I got so excited. It’s rare you see a holiday movie with a Black focus. Tell me about your role and how did you get involved with Holiday Hideaway?

Joyce: I read the script and it was just so charming! I love doing Christmas/holiday stuff, so when I read it, I thought it would be great for me and my husband, Dan Martin. He read it and said, “Oh yeah, we gotta do this!”

[Joyce and Martin are a kind of Black royalty when it comes to acting partners. Joyce has starred in iconic media like Roc and classic Black films like Set it Off. Martin has a long line of credits to his name including Rush Hour, Heat, and Beverly Hills Cop III.]

Vivica and Camille, what drew you to the project?

Fox: All of this Black Girl Magic to be very honest with you. I was contacted by [writer and producer] Sharon Brathwaite. She did an Unsung  [a popular TV One series] for me celebrating my career. She said, “I am NOW a filmmaker,” and that’s what I’m here for. As an independent filmmaker myself, if I can lend my name to a beautiful movie about Black love, and I play a powerful woman? I was down.

Winbush: I was so interested that it was a female producing team with a female writer and all Black women. I mean, how can you go wrong with that? I appreciated the opportunity to play the lead and to come back strong like this. I connected with Carly because she is very Type A, and she loves to make a plan. She has a list for everything, and that’s kind of me in real life so I identified with that.

How about you, Cole? Can you tell us how you became involved?

Patterson: I got involved through [producer] Lamise Williams, who connected me with Sharon [Brathwaite]. At the time, Lamise and I were looking for a holiday script. Lamise was in a casual conversation with Sharon, and she said, “I have a holiday film!” When I got the script, it was perfect. I read it in less than an hour, and I had so many ideas already. It was just a good, solid story.

That sounds lovely. How do you think audiences will view the movie?

Joyce: I believe people are going to really enjoy the movie. Everyone who worked on it really loved the script, and that makes a big difference. I love it because it’s not necessarily dealing with the underbelly of [Black life in America] but the higher echelons.

Patterson: It’s a simple story of Carly, who has a boyfriend, but she doesn’t want to get married because all she has is trauma from her family fighting and not wanting to be together. She doesn’t know what a relationship feels like anymore because her examples weren’t there. So when she goes to this villa, she meets this beautiful couple who have been married and have no children. They take her under their wing, and she sees love from a different perspective.

It sounds very cute and sweet.

Fox: I play Carly’s boss, Angela, who Carly comes to and ends up getting an excellent opportunity to hide away. Then you come to find out my character is going through her own stuff with her family. It was such a fun experience.

Winbush: I love the holidays so to be able to do a Christmas-themed, family-themed, and love-themed in general type of movie? It was just so on point. I’m just so thrilled to be here.

Why do you feel Christmas/holiday movies are so comforting and universal?

Joyce: Christmas is the time people are trying to love one another and reach out to each other and be family. Everyone goes through their problems, but family goes through it and resolves it together as family. Whether it’s love, getting married, getting divorced, having kids, trying to deal with Christmas, getting engaged — whatever it is, we need to see more movies dealing with us in a charming way, that’s not always hitting us over the head with the politics of being Black in America. We have movies like that, and we need them. But Hollywood only tends to see us one way. It’s very important for us to show all the different ways we need to be represented and seen.

What is one of your favorite moments that you’re excited for audiences to see?

Fox: My character Angela is a great businesswoman who is building up her company and seizing every opportunity. So I loved playing Angela, the Head Chick in Charge.

Joyce: I had a wonderful time walking through the woods with Camille. She impressed me so much. We immediately started walking and talking and creating things as if we were those characters — as if we’d actually known each other. I also really had fun working with my husband. We had a little scene where we don’t have any lines, and we’re just kind of settling in with each other. We had fun doing it.

Jackée Harry and Vivica A. Fox Star in Lifetime’s ‘The Wrong Cheer Captain’