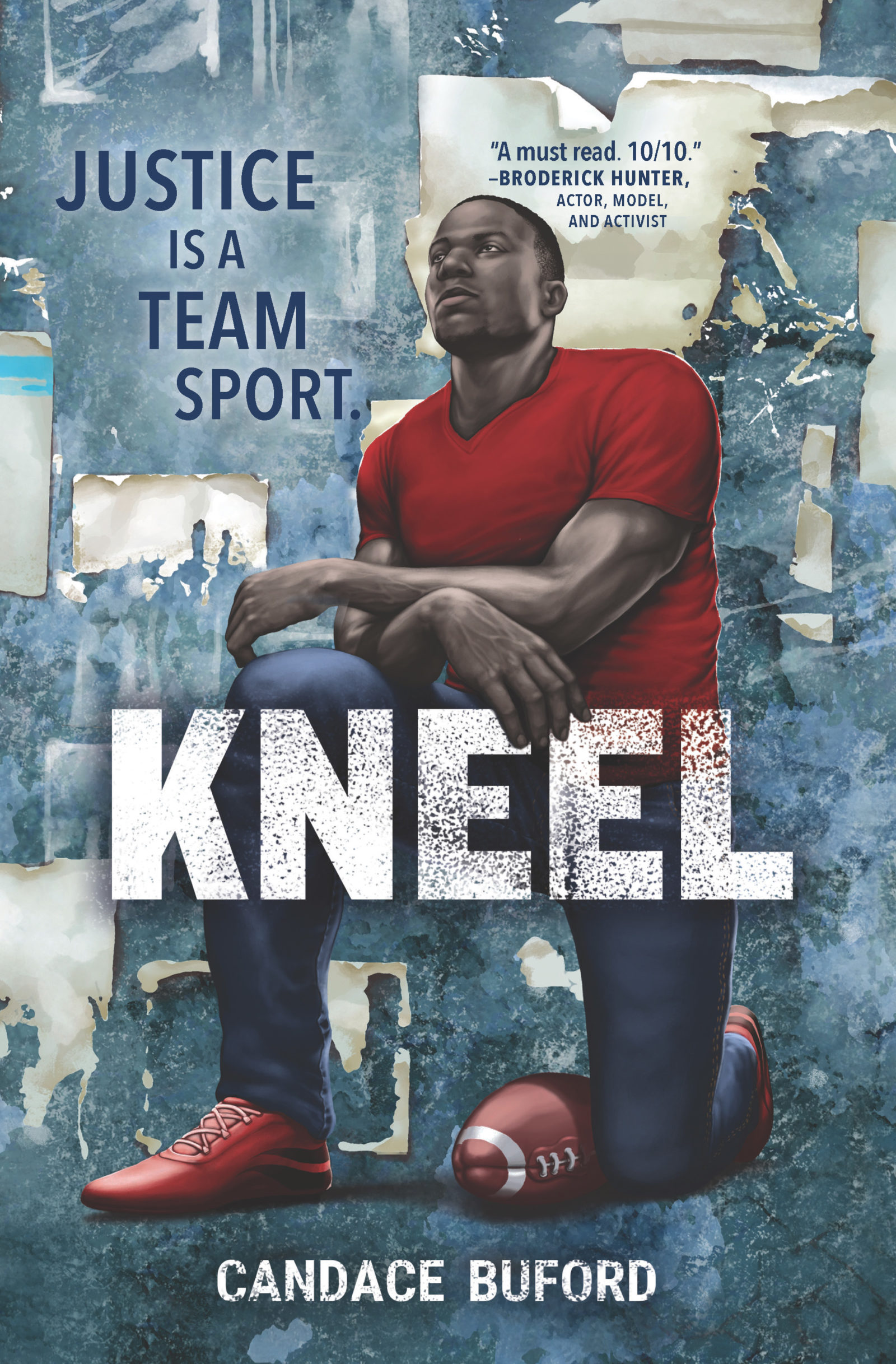 Russell (Rus) Boudreaux is the star player and team captain for the Jackson Jaguars football team, in Monroe, Louisiana. Rus and his best friend and co-captain Marion know that football is their ticket out of the small town. After an incident occurs at the opening game against a rival team, Marion is unfairly arrested and benched for the remainder of the season. During the next big game, Rus makes the decision to kneel during the national anthem as a protest against injustice.

His choice makes him a target of hatred and jeopardizes his chances for a scholarship. Rus finds it within himself to fight for justice but faces many challenges. Kneel, the debut novel by Candace Buford, explores racism, injustice, and the power of Black male friendship.

On September 1, 2016, at a San Francisco 49ers final preseason game, quarterback Colin Kaepernick opted to take a knee during the national anthem. His act was a powerful message against the racial injustice and police brutality in this country. Backlash and hatred poured in, as many twisted the meaning of what Kaepernick had done.

“I am not going to stand up to show pride in a flag for a country that oppresses Black people and people of color. To me, this is bigger than football, and it would be selfish on my part to look the other way. There are bodies in the street and people getting paid leave and getting away with murder.” — Colin Kaepernick

Candace Buford’s Kneel keeps a powerful message alive about the effects of racism in a small town, white privilege, and Black boys dying just for being Black. It also gives us a look at strong friendships between young Black men and how they are capable of more than just sports. It’s poignant and timely.

Truth be told, I am not the biggest reader of young adult fiction. However, I quickly became attached to Rus and Marion — two young Black teenagers from the “other side” of the tracks just trying to survive, literally. We learn early on about the racial divide in the small town of Monroe. A Black teenager has recently been killed by the police, and tensions are high.

I appreciated the story being told through Rus’ lens — a young Black teenager — which was grounding and convincing. Also, the author’s ability to present various forms of activism and protest was refreshing; Buford didn’t just resort to the characters organizing a march but went above and beyond to show the reader something different.

I expected Rus to have internal conflict, and this was properly explored. Rus battled whether to speak up or remain silent. His battle was rooted in the fact that no one was on his side in the beginning. The people he thought would be weren’t. He also knew that he would be jeopardizing his one chance of getting out of Monroe. This back-and-forth happened until he had those he cared about on his side.

Before reading the book, I assumed that it would be mostly teen angst. However, the author allowed us to feel what Rus’ parents were going through. His mother is a proud woman and cares deeply for her family. Like most Black mothers of sons, she doesn’t want to see hers stuck in Monroe or, worse, dead. Always giving instructions to say “yes, sir” “please” and “thank you” was her way of keeping him safe and ensuring he made it home.

Rus’ father’s anger at what happened comes from a place of regret. We learn that the father also played football when he was in high school. He remembers having bananas thrown at him by white people as they called him a monkey.

Rus did not like that his father was living vicariously through him. It explains why he was told that football was his job and family contribution. That made me sad, because that’s a lot of pressure for a kid to have. His family couldn’t afford for him to throw away his only chance of doing better. The father admired his son for speaking up for himself because it was something he couldn’t do. This was the turning point of the book because Rus realizes that he did make the right choices. It was the validation he needed all along.

I loved the fact that Rus was a good kid with flaws; smart and trying his best to do what’s right. Gabby, his love interest, plays into that narrative. The innocence of their relationship was actually a breath of fresh air.

Ms. J’s English class also played an integral role in Rus’ decision-making process. First, it was the assignment based on James Baldwin’s novel If Beale Street Could Talk. It’s the story of a couple’s relationship strained when the male character Fonny is falsely accused of a crime and sent to jail. Having this in Buford’s book sets the reader up for what’s to come. Later, the class is analyzing the poem Still I Rise by Maya Angelou. This is another window into what is to come later on in the story.

I started to suspect the identity of Dante’s Shadow early on — and I was right. Unfortunately, I did not see the point of this side story, especially with nothing significant happening after the reveal.

Another aspect of the book that threw me off was Rus’ language. There were instances where he would use Black vernacular when speaking with his parents, friends, etc., but then it would switch to a completely different voice that was not believable.

There were a few things that were resolved too quickly, while also understanding that every issue will not be resolved by the end of the book.

Kneel is an opportunity to have meaningful conversations about racism, accountability, and social activism. Young adults will be able to see various ways they can contribute to causes they believe in.