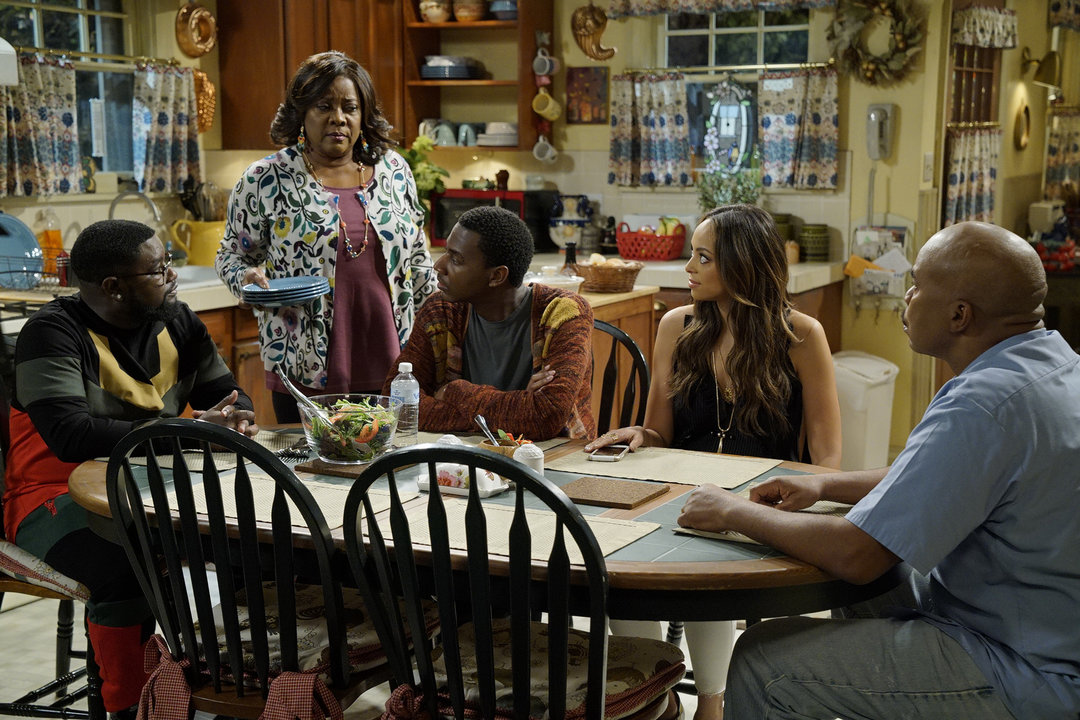 Episode three of season three of the Carmichael Show deals with assisted suicide, and it gets pretty emotional.

Joe, Jerrod, and Bobby go to visit Joe’s mother in South Carolina (revealing that the show takes place in North Carolina) and they’re concerned about her because she has Alzheimer’s. She greets them and lets them know she has Alzheimer’s (which they already knew because she already told them). And that the thought of slowly losing herself and her memories is too unbearable. She wants to take her life in her own hands, and she wants them to help.

Joe is outraged (obviously) and tells Jerrod and Bobby (while his mother is in the kitchen) that clearly, she has lost her mind and they need to find her help. Jerrod is unsure, because his grandmother seems steadfast in her decision.

She comes back with cookies (that they don’t eat for safety reasons) and asks if they are willing to help her. Joe gives a resounding no, because she’s his mom he and tries to talk her out of it. Bobby doesn’t respond and Grandma Francis is upset because it looks like she’ll have to do this alone.

Feeling her desperation and pain, Jerrod agrees to help his grandma, and she appoints him as pillow man. Jerrod’s grandmother is dying by pill overdose, but in the event that the pills don’t kill her and just put her in more pain she wants Jerrod to suffocate her with a pillow (hardcore AF).

Jerrod becomes unsure — probably because he was just promoted to straight up murder instead of assisted suicide — and Joe becomes overcome by grief and leaves his mom’s house.

Jerrod goes to find him (at Wendy’s) and gets Bobby some food. Jerrod comforts his dad, who can’t come to terms with just letting his mom die when she did everything to make sure he not only survived but thrived.

Jerrod points out that because Joe loves his mom, he should be with her in times of pain, and want her to be relieved of that pain no matter how she does it. The two return to Grandma Francis’s house, where she is laying in bed ready to die. She takes the pills… and nothing happens. Jerrod asks her some questions about the way she treats Cynthia because she’s dark-skinned, and then confesses to stealing from her purse.

She forgives him, and then is preparing to watch a television show when she gets sleepy, and then soon after dies, ending the episode.

This is without a doubt the heaviest episode of the season, and there was a small window for laughs throughout it. This idea of assisted suicide is very heatedly debated because it questions where to draw the line ethically. I think this episode hit home for me because when I was little (7ish) my grandmother also died from Alzheimer’s disease. She was a lot further on then Jerrod’s grandmother, and as far as I know, she never requested to be euthanized. I’ve also read about the effects of Alzheimer’s on the body and as it progresses it gets more and more terrifying.

Joe: This episode was amazing in terms of character development for Joe. David Allen Grier frequently portrays Joe as this rough, manly, man so to see his vulnerability was a delight as DAG got to flex his acting chops, and we got to know Joe more as a character. 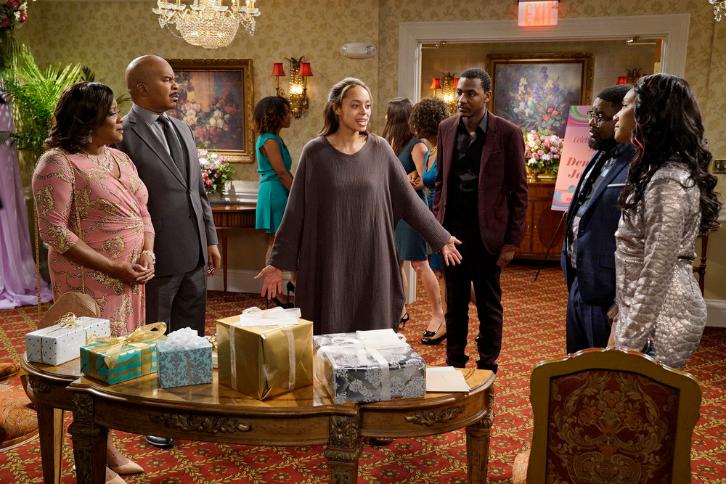 This episode (which was substituted for an episode about gun violence due to the senate baseball shooting) looks at body image and the politics of pretty privilege.

The gang (meaning the full cast) are gearing up to go to a lesbian wedding. Joe is really excited to be venturing into this new and exciting territory, but Bobby is bummed because he doesn’t have a date.

Maxine offers to set Bobby up with one of her friends and at first he is excited because he assumes that since Maxine is conventionally attractive, her friend will be as well. His family is a little more skeptical — Joe points to the hot girl phenomenon (for every group of attractive women there is one ugly friend). When Maxine describes her friend (really sweet, smart, a lot of fun) the Carmichaels get even more suspicious and ask to see a photo. She shows them her picture and they all deem her ugly.

Maxine is shocked at the shallowness of the response (I’m confused as to why? Don’t you know your audience, Maxine?) and the Carmichaels are shocked by Maxine’s willingness to set Bobby up with someone so ugly.

Bobby agrees to go out with her, only because the invitation has already been sent, but Jerrod tells him that he shouldn’t feel like he must. Bobby thinks that Maxine’s decision to hook that friend up with him says something about his looks.

The Carmichaels are afraid of what their extended family will think if Bobby brings her “ugly” friend along. Maxine doesn’t think that society will judge them that harshly, but Jerrod points out that they (they being the Carmichaels) makeup society and have been judging this girl pretty harshly.

While Maxine is trying to convince Bobby that no one will think twice about who he goes to the wedding with, Nekeisha, his ex-wife and who was supposed to be his date, comes through with her new date who… he’s a snack y’all. Nekeisha shows him off, abs and all, much to the delight of Cynthia (and me, if we’re being honest here) and then they leave. After that display of a certified 10, Bobby is certain he can’t go to the wedding with Maxine’s friend now that his ex is bringing an Adonis.

Maxine criticizes them again for their shallowness and they retort that because Maxine is pretty she doesn’t know the hoops people who are considered ugly have to go through. She is outraged, as she has purposefully never used her looks to get anything, and like an idiot, Jerrod tells her that he only approached her because she is pretty. He basically completely disregards her humanity and personality and, like anyone who’s been reduced to a shallow depiction of yourself, she becomes rightfully pissed.

The next day, Jerrod is waiting for Maxine to be ready so they can go to his cousin’s wedding. Maxine emerges in a dress from a dystopian novel and sans makeup (same, tbh) to prove a point about societal expectations. Jerrod tells her that he’s embarrassed to be seen with her and that he told his entire family how hot she is; including betting money on it.

They go to the wedding and the Carmichaels (who see Maxine all the time) call her out on her not trying to look good. However, everyone in Jerrod’s extended family who’s meeting her for the first time thinks she looks great.

Maxine is pissed that Jerrod is making money on her appearance, so Joe and Nekeisha ask her what exactly is the hill that she’s so determined to die on. Maxine throws a fit because her attractiveness begets unwanted attention in her life, including catcalling and verbal harassment — which are actual issues — and everyone except Jerrod turns on her for being self-absorbed. Jerrod tells Maxine he sees and respects her vision and that overall her personality and mind is why he stays with her.

This was interesting to watch because usually, I resonate with Maxine, mostly because she’s always right. Except in this episode. Although I appreciate Maxine’s intention to question and fight against westernized beauty standards and the sexism aligned with them, she is stunning and therefore benefits from pretty privilege.

Joe was right, this isn’t the cross Maxine wants or needs to die on, and her attitude toward the entire thing was self-righteous. As someone who doesn’t fulfill the westernized standards of beauty, Maxine’s soapbox is patronizing, but I think it’s great for Maxine’s development and putting her in a role where she’s wrong for once.

This episode also made me uneasy because of the semi-transphobic comment made by Cynthia at Caitlyn Jenner’s expense. As much as I don’t see it for that family, I feel like comments on Caitlyn’s looks are kind of a rocky subject.

That being said Cynthia had some AMAZING one liners including:

*When speaking about a mixed-race gay couple making out* “Well which one (is hotter?) Was it the black one? I hope it was the black one!”