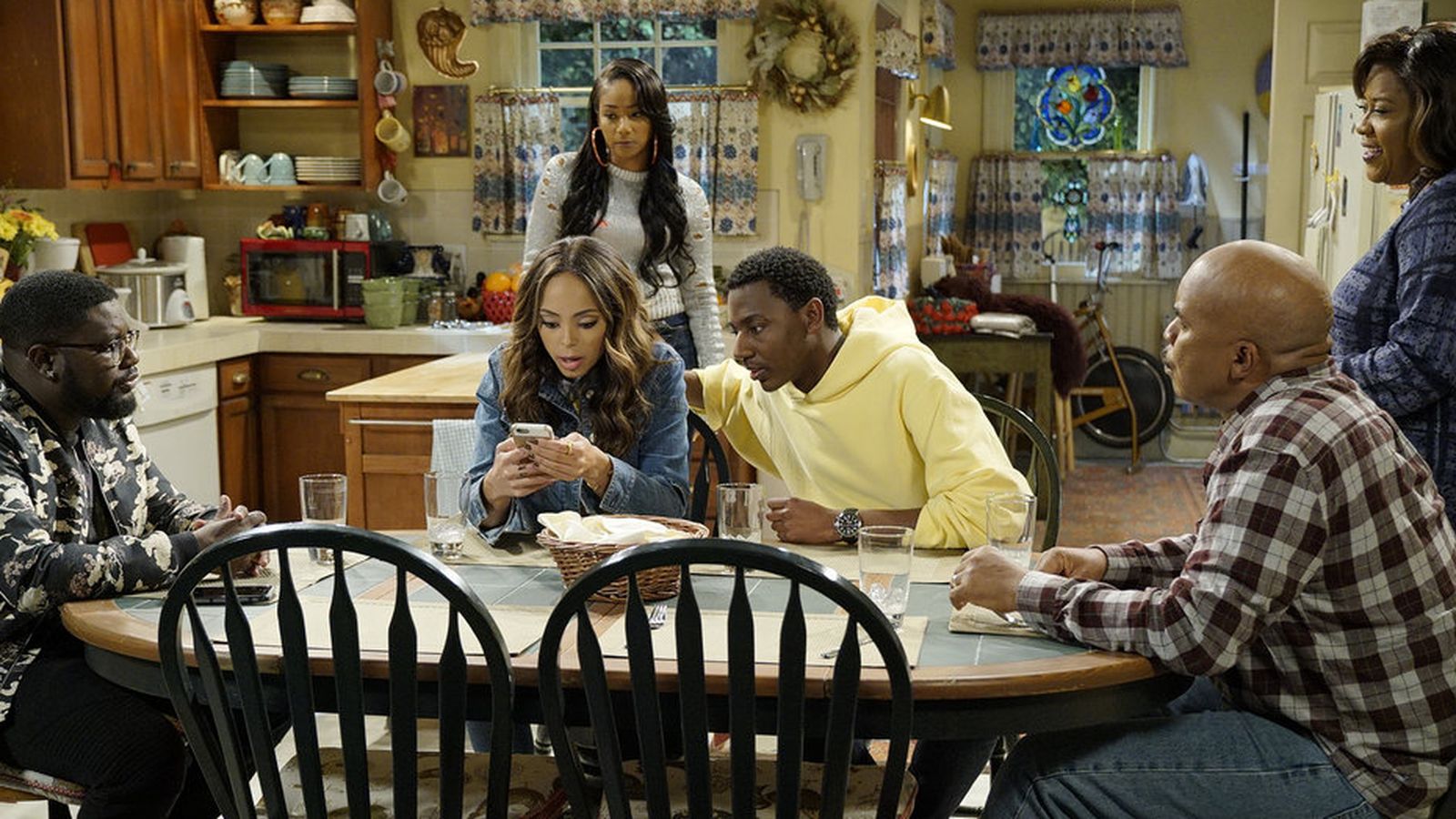 Imagine every family argument you’ve ever had. And I mean the LONG ones. Like the ones that started at dinner, and the next thing you know the cheesecake has been eaten, the dishes have been cleared and your cousin who smokes comes back in and says “Y’all STILL arguing about this?” long.

Now imagine that argument as a comedy.

That’s essentially what The Carmichael Show is, and in its third season, the show that holds nothing back is still at it.

In the season opener, The Carmichaels and Maxine are gathered in their kitchen when Maxine, who is scrolling through Facebook, is made privy about her friend who shares that she was raped. This announcement is followed by outrage from everyone in Jerrod’s family, until they find out that their definition of rape differs A LOT from Maxine’s.

The girl’s definition, Maxine’s definition, my definition and quite frankly the legal definition is that because this girl is unable to give consent to the events that transpired she’s been raped.

Joe, Cynthia, and Jerrod hold onto the more antiquated definition of rape which is an almost cartoonish definition of a woman being attacked by a stranger in an alley.

Jerrod thinks that they should hold back judgment until they get the man’s side of the story, and Maxine finds his methods insensitive and a product of the system that lets rapists get away with their actions.

Bobby is concerned because he thinks that he might have raped his date who hasn’t gotten in contact with him since the night before. Bobby doesn’t remember if he ever received a confirmed yes from his date, and Jerrod reassures him, that since the woman essentially agrees to a Netflix and Chill situation, that he’s in the clear, even though the chill was something that wasn’t explicitly stated.

Jerrod argues that when he and Maxine have sex there isn’t any protocol for consent, but Maxine counterargues by pointing out that Jerrod’s sex moves are repetitive. Jerrod continues to argue that the accusation of rape is just as bad as being raped. As their argument escalates they shine a light on many famous men who have been accused of rape, but have never been negatively affected career-wise or socially.

Cynthia is tired of the rape talk (it was a lot in the context of an afternoon) and goes to get ice cream. Jerrod offers to make Maxine a sundae, but instead of abandoning the previous topic at his mother’s insistence, he continues to bring it up mocking Maxine in the process. She gets mad (obviously) and leaves.

Bobby is still preoccupied with the fact that he might’ve raped his date, who later posts something on social media that causes Bobby to question himself even more. So much so that he decides to go to her apartment and ask. His family thinks it’s a terrible idea (because it kind of is), but he sticks to his guns goes for it. Coincidentally, the girl lives in Jerrod’s apartment building so the two end up waiting in the lobby. Bobby runs into his date, and he finds out he didn’t rape her, the two had sex, but she stopped contacting him because he was bad at it.

Jerrod returns home to a fake sleeping Maxine, and he tells her that she was right about consent (DUH). And the two make up.

I appreciate Bobby’s thoughtfulness in the episode and the fact that he took the time out to seriously question his actions and consider what Maxine said. Even though Maxine is usually right throughout the show, she isn’t taken seriously, especially by Jerrod or Cynthia (which is done due to her disdain for Maxine in general and therefore more comedic than anything).

Since the cast is considerably small (six characters total) and the plot revolves around a central argument I’ve decided to name a character the winner for each episode and highlight their funniest/most meaningful quotes.

Nekiesha for jumping a rapist, being free and honest about her sexual preferences (to a fault), and because her safe word is Mike Pence (which honestly would obliterate the mood for me)

“If you hear ‘Mike Pence,’ you’ve gone too far for Nekiesha.”

*In front of Bobby’s parents* “Good news! Bobby, you didn’t rape her. I got a friend that knows Natalie and she said you’re just bad at sex.” 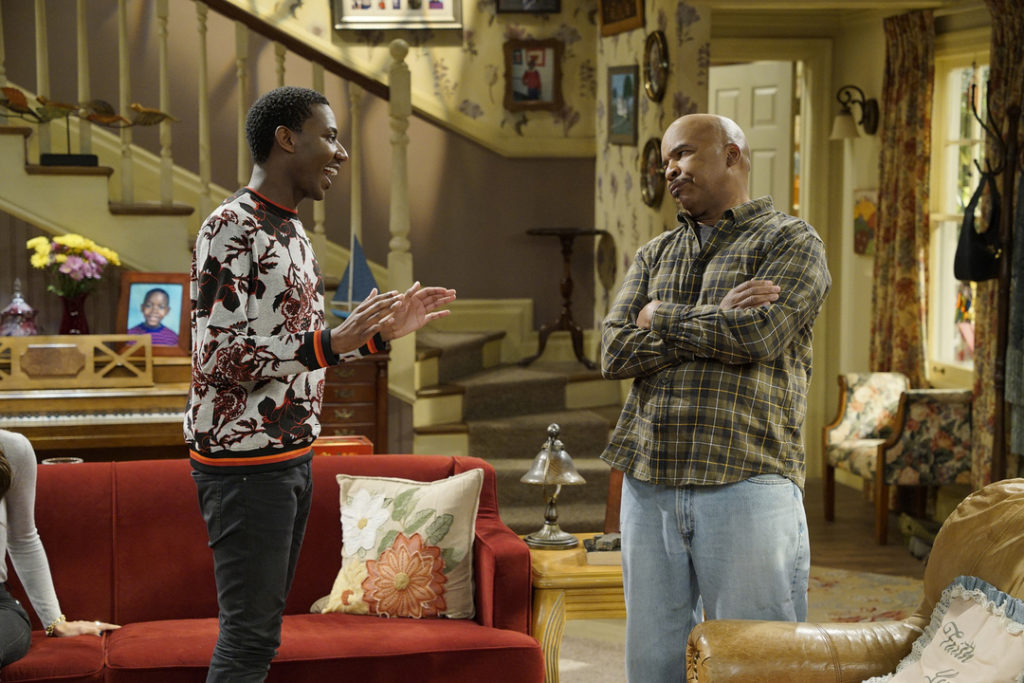 Joe has brought Jerrod and Bobby to the army recruiting center to bring the workers there some donuts. Joe goes there once a week (but can’t make time to take his wife on a date) and they run into their neighborhood bully, Kevin Wilson.

Jerrod is disgusted by Kevin because besides being a bully, he knocked up one of his friends and then dropped her like a bad habit. According to Joe, Kevin’s willingness to join the troops has absolved Kevin of his sins. Joe calls Kevin over and Jerrod tells him about himself.

Kevin claps back in an arrogant way claiming he joined the army to make a sacrifice and commit to something bigger than himself (how about you commit to your son, bruh?), something that Jerrod won’t ever understand. Joe (aka Kevin’s hype man) is annoyed with his son and tells Jerrod to thank him for his service. Instead, Jerrod calls Kevin out on his arrogance and irresponsibility while Bobby offers him a donut.

The three return to Joe’s house, who is disgusted by his son’s actions and tells Cynthia and Maxine about their run in with Kevin.

Cynthia, like Joe, excuses Kevin for his past (and present) actions but Jerrod (rightfully) thinks Kevin is in the wrong. Jerrod’s refusal to give Kevin the troop excuse and Joe brands him unpatriotic.

Maxine defends her man, proud that he took it upon himself to question the ideology of pledging yourself to your country, and sees it as an act of patriotism. She also points out that America won’t improve if people are lambasted every time they critique it. Joe pushes back, stating the necessity of America’s evil acts as a way to secure America’s greatness. Jerrod, still astonished by his parents’ ability to look past American atrocities for their own comfort points out that they are black, thus victims of America’s oppressive nature.

Joe almost goes so far as to defend slavery, but stops short of saying that were it not for slavery we’d still be in Africa (if only).

Kevin comes to the Carmichaels house to apologize to Bobby for terrorizing him as a child. Joe volunteers to help Kevin with any of his needs while he’s overseas, and Kevin, taking Joe’s word for it, asks him to watch his dog. Unbeknownst to Kevin, however, Joe and Cynthia hate dogs — but since Jerrod can’t pass up an opportunity to prove a point, he throws his parents under the bus and signs them up for dog-sitting duty. For six months.

To prove a point, Joe accepts. Cynthia is disgusted by the dog’s presence in her home, but Joe’s pride won’t let him change his mind.

Nakeisha comes to their house to let them know that Bobby’s going to join the army and Joe freaks out because Bobby’s too frail to be a soldier. Joe and Jerrod go to stop him, and Bobby admits that he was only going to join to make his father proud of him. Joe tells Bobby that he doesn’t trust the life of his son in the hands of the government (I mean a talking Orangutan is our president) and throws a hissy fit, stating that nobody in the recruiting office will die with a purpose, because of the giant toddler in office.

To be completely honest, this episode was kind of a mess, I’m not sure if it’s just hard to find justification for being pro-America in this political climate, but Joe’s rant/argument justifying the atrocities that white America has committed was all over the place.

I did appreciate them tackling the idea of what it means to be patriotic and what serving your country says about a person. I do agree with Joe that we should honor the people who find The United States and its inhabitants important enough to protect, but I also think war is a load of horse hockey and I have yet to see any justification to be engaged in one (especially currently). I also agree with Maxine, that the most American thing you can do is question America.

Winner of the episode

Jerrod for refusing to say the pledge of allegiance because he just found out that Santa wasn’t real, for sticking up for his friends, and for putting his father in a position where he had to accept a dog into his home (everyone should have a dog tbh).