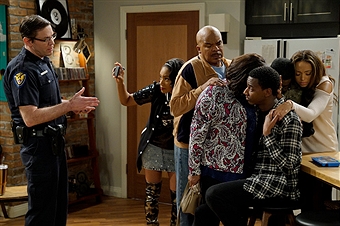 This week’s episode of The Carmichael Show, which was supposed to be last week’s episode, looks at mass shootings and trauma — friendly reminder that this is a comedy.

Maxine is sing-cleaning (as any good American does) when Jerrod comes home from the mall; he sits down enjoying her performance (it’s pretty cute). She asks him how his time there was and he tells her there was a mass shooting at the mall resulting in four deaths.

Jerrod starts to explain to Maxine the concept of a “shoot-up-able” place (i.e. the airport, a college, the movies at 8pm). Bobby then proceeds to bust in and hugs his little brother happy he’s alive. Jerrod keeps saying he’s fine, while Maxine tries to take care of her bae.

Just as Jerrod tells them not to be overdramatic, Cynthia runs in doing the most. She tells Jerrod that she was playing Sophie’s Choice almost admitting in front of Bobby (who she didn’t see) that she would rather he (he being Bobby) be dead.

Joe comes in right after her and reprimands his son for almost dying. Joe describes all the things they would have to do in their role as newly grieving parents. Joe starts to blame Jerrod for being at the mall in the first place, Maxine pushes back and when he asks who he should blame he proceeds to give a laundry list of people/groups that should actually be blamed (The NRA, the shooter, etc).

Bobby has an “epiphany” that he was almost at the mall, and thus also had a brush with death. Everyone sympathizes with Bobby, and Jerrod tells them to stop victimizing his brother. Maxine agrees, stating that Jerrod is the actual victim (as he has just witnessed a tragedy) but he rejects that, claiming to just be some guy who made it out.

Nekeisha stops by to celebrate with Jerrod for being a part of the “Seen a Shooting” club (we meet on Thursdays). Joe tells Jerrod that this shooting is now a part of him and will help build character. He tells them all how his father’s abused helped him to become who he is today, and Cynthia lets them know that to cope, Joe spends a lot of his time at night outside alone looking at the moon.

Jerrod, who’s sick of his family’s nonsense (in his own home), stands to kick everyone out when Nekeisha notices that there is blood on his hoodie. This causes an uproar, and annoyed he gets up and leaves.

Jerrod is in the laundry room trying to get the blood out of his hoodie and Maxine goes to find him. She tells him she’ll be here for whatever he needs. He takes that to mean sex and tries to make a move on her (it’s one of their fantasies!). Their neighbor interrupts them and tries to relate to Jerrod as she survived 9/11 (she was in Queens). Bobby finds all three of them and lets Jerrod know that a cop is looking for him to get a statement.

Upstairs, Joe, Cynthia and Nekeisha are nervously interacting with the cop who’s waiting for Jerrod. Cynthia decides it’s safer if they just leave their hands in the air and the cop tries to persuade them that they’re in no danger (sure Jan). Nekeisha starts to record and things get more tense when they find out the cop’s name is Greg Zimmerman (interesting choice of name there, show).

Jerrod proceeds to retell the story to the cop in more detail revealing that he almost got shot. Jerrod agrees that he’s a victim and then has an existential crisis moment that causes both his parents and Bobby to leave (with his Dunkeroo’s). Maxine is turned on by Jerrod’s vulnerability and tries to make a move on him.

The next day they find out the shooter was a woman (debunking Joe’s ISIS, racist white or stressed out Asian theory). Bobby and Joe start to laugh at Jerrod because he almost got shot by a girl.

This episode was really good and pretty funny considering the subject matter. It was interesting to see Jerrod go through the stages of grief (listed below). And even though we now know this show is going to be cancelled (RIP) it would be interesting to see how this incident continues to haunt him as his father promised it would.

I also appreciate the reality that was portrayed of how black people face different types of trauma as painted by what happened to Jerrod and his family’s run-in with the cops. I also resonated with Joe painting a picture/ paying homage to all the people who have lost their child and the public activist community they align themselves with because of that.

Denial (I am not a victim)

Anger (I just wanted to be left alone; leaves apartment)

Bargaining (with Maxine for sex)

Depression (having to retell the story to the cop)

Acceptance (Annoyed with Joe and Bobby, goes to look at the moon)

Joe was a strong contender in this episode and had several hilarious one lines. Learning about his childhood was a great look into his character and his development. Also saying “We have to treat these officers like bears.” Is brilliant in so many ways.

“Why would I talk to you when I got the moon? You think you’re wiser than the moon Maxine?” 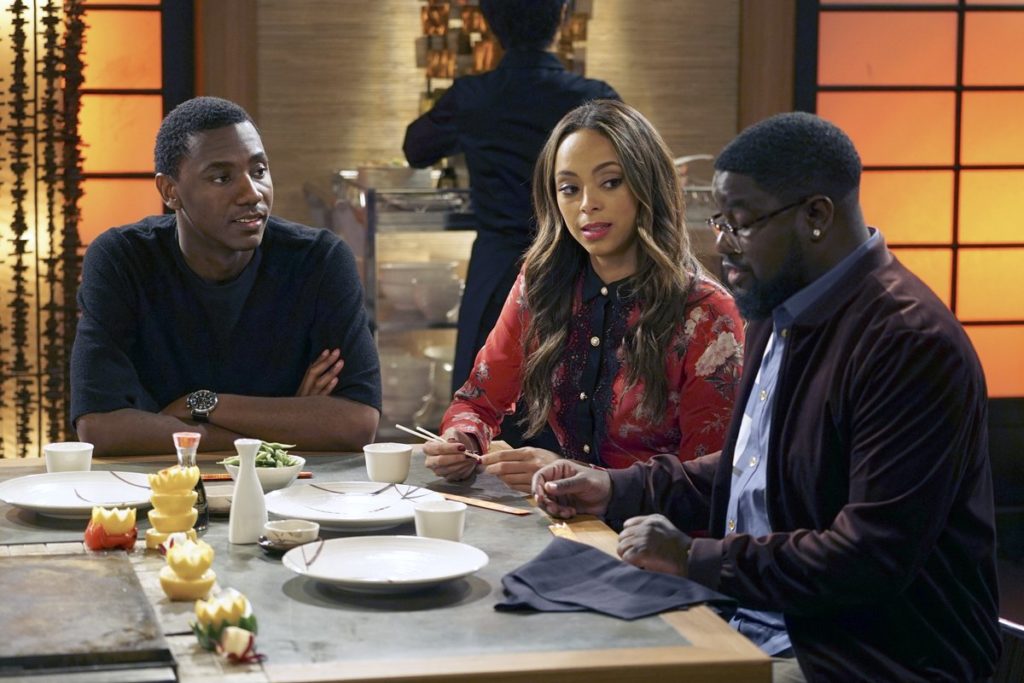 Bobby asks Maxine and Jerrod to meet him at a hibachi restaurant and Maxine is uneased because she feels like she’s forced to clap every time the chef does something. Upon not clapping she is reprimanded by the other people at the table.

Bobby shows up and tells them that he got a message from a guy claiming to be their half-brother. He tries to reassure Jerrod by telling him he’ll get to the bottom of this situation but Jerrod stops him by letting him know that Morris is indeed their half-brother.

Jerrod has apparently known for 20 years and proceeds to describe how he found out, including the brief fear that his father was a pedophile. Maxine and Bobby find out that Cynthia doesn’t know, and they are both amiss by how calmly Jerrod is taking this. Bobby, in shock and disgust refuses to keep his father’s secret and decides to go tell his mother.

Jerrod and Maxine warn Joe that Bobby found out about Morris and is going to tell Cynthia. Panicked, he tells them all to shut up because Cynthia is right upstairs. He tries to bribe Maxine and Bobby but they refuse and Maxine asks him how he can live with himself.

Jerrod tries to defend his father by pointing out how damaging it is internally and externally to his father (both are surprised that he isn’t dead yet) to keep this secret but Maxine just asks how Joe can look at himself know he forced his son to lie for 20 years.

Cynthia comes downstairs and, out of nervousness, Joe starts to sing with her so the others can’t blab. She asks why they’re all there and Joe lies (again) by saying they all came for pie. Cynthia made the crust gluten free for Maxine’s Crohn’s disease (aka her lies) and overcome with emotion Maxine hugs her, causing Joe to yell at them to chill.

Jerrod starts to break down not realizing how kind his mother is. At the very moment she comes back with chocolate cake because he doesn’t like blackberry pie (which… how dare you?). Joe essentially pushes her toward the kitchen for whipped cream and yells at the rest of them to get out. They leave their parents home with the burden of the lie weighing on their heart.

The next day still overwhelmed with guilt, Jerrod can’t sleep due to the nightmares of his mother’s sadness. Joe stops by to ask Jerrod how forcing him to lie has affected his life. He basically says it made him a cynical mistrusting person (so himself) and Joe decides he must tell Cynthia because Bobby and Maxine don’t deserve to turn out like Jerrod.

Joe returns home to tell her the truth. She asks him if it’s something she needs to know and he says yes. He tells her the truth and then he tries to comfort her but she isn’t having it. Refusing to discuss it she pretends that everything is okay just as he has done all these years. She tells him that he’s not the man she thought she knew, and sends him to get out of the kitchen.

He sits in his chair when Bobby storms in demanding that his father tell the truth. Joe responds by letting him know he told Cynthia, and that she’s in the kitchen crying. Bobby pauses and then promptly walks out.

That night while Joe is sleeping on the couch Cynthia stands over him quietly (ala insert horror movie where this happens). He’s afraid she’s going to kill him (good) and she berates him for making her that woman who is talked about by other women. He apologizes and tell her he’ll make it up to her. The family (and Maxine) meet at the hibachi restaurant again; Joe and Cynthia tell them that they’re going to work through it because they are an honest family. She then proceeds to tell the white couple next to them her business and they retort with their own drama.

Sooo, Loretta Devine isn’t the best fake crier… but that scene with David Allen Grier was still powerful. This episode did a great job of utilizing David and Lorretta’s acting chops as well as Lil Rel’s comedic timing. I loved the analysis of what harboring lies can do to one’s body as well as how guilt can make you view someone differently (Cynthia seems much nicer due to them all lying to her) and it played out well in the show.

If you were wondering, technically chlamydia has links to cancer.

Even though Lorretta Devine gave us pretty good acting in this episode, Maxine’s hatred of hibachi restaurants, and the point she makes about pretending to be impressed with the mediocre things children do ring true to me. Also pretending to have Crohn’s disease is terrible but hilarious and puts her in a place where she has some moral ambiguity.