The Carmichael Show 3×09 “Evelyn and Vernon”

This week’s episode takes a look at marriage from various generational points, and questions what women are willing to put up with.

Maxine, Nekeisha, Cynthia and her mom are attending the Women’s March while the men of The Carmichael Show chill with Grandpa Vernon and question why the women are marching at all (if you don’t know, you’re apart of the problem). The women come back (minus Nekeisha) and they are feeling empowered until Vernon shuts down their hootin and hollerin and tells Evelyn (his wife) to go make him lunch.

Everyone leaves, but not before Evelyn stops Cynthia and tells her that she wants to leave her father. They return to the Carmichael’s house and Cynthia is flummoxed as to why her mother would want to leave her father. Jerrod lays it down for his mom by letting her know that low key grandpa treats his wife like trash.

Joe tries to say that it’s just their dynamic, but Maxine argues that it’s more than that. Cynthia blames Maxine for empowering her mother (because of course), but Jerrod argues that all grandfathers are terrible. Cynthia is concerned about what this means for the sanctity of marriage. Nekeisha comes back after almost getting arrested for yelling at a senator (whom she’s been dating) and they ask her her opinions on divorce. Nekeisha is obviously a champion for it because she’s traded up (no shade to Bobby).

Bobby commends his parents for getting through their marital problems (remember Joe’s secret son) and Joe thanks him stating that they “made it through.” Then Cynthia gets mad because they are still working through Joe’s betrayal, and when Joe tries to talk his way out of what he just said he makes it worse. Frustrated, Cynthia leaves her house and goes back to see her parents to talk her mother out of this decision.

At her parents’ house, Cynthia and Evelyn talk about marriage and what a person’s breaking point in a marriage is. The next day Joe goes to see Jerrod and Bobby at Jerrod’s apartment. Cynthia still hasn’t come home and Joe reveals to his sons that Cynthia essentially did everything for him and that he can’t survive without her.

Joe decides he needs to go get his wife back and goes to Evelyn and Vernon’s house. Joe apologizes to Cynthia and begs her to come back and the two have a vulnerable moment which is interrupted by Vernon calling Joe a homosexual. Evelyn yells at him to shut up and tells Cynthia that her and Joe have something worth saving.

Bobby and Nekeisha give their grandparents a guide of how to live together though divorce.

I really loved this episode because of the various subtle issues highlighted. The discussion about marriage is an interesting one and reminds me a lot of Aziz Ansari’s book, Modern Romance, especially in consideration to Evelyn and Vernon. Joe’s comment about verbal abuse being a plus for women during Evelyn’s youth is a half truth. During that time, women married men who had good jobs so that they would get out of their parents’ homes, and have hope that their children would live better lives. Many of these men were also disrespectful because they grew up in a time that didn’t respect women and women lwere in many ways forced to let it pass.

I also love the exploration of how toxic masculinity effects men. Joe not being able to do anything for himself is a product of his toxic upbringing and an enforcement of traditional gender roles.

“Old people can barely handle texting, what are they going to do with a new identity?”

Because it was such a strong episode, it was hard to decide, but I’m going to give it to Jerrod. The silent disdain when Bobby asks him if he shaves his chest stands out by itself, but his rant about how old men (grandpas) are horrible is true in some ways (disclaimer: both of my grandfathers died before I was born, so I have neither negative nor positive feelings towards grandpas). Also this quote: “So did women not have self-esteem before Destiny’s Child?” is gold. 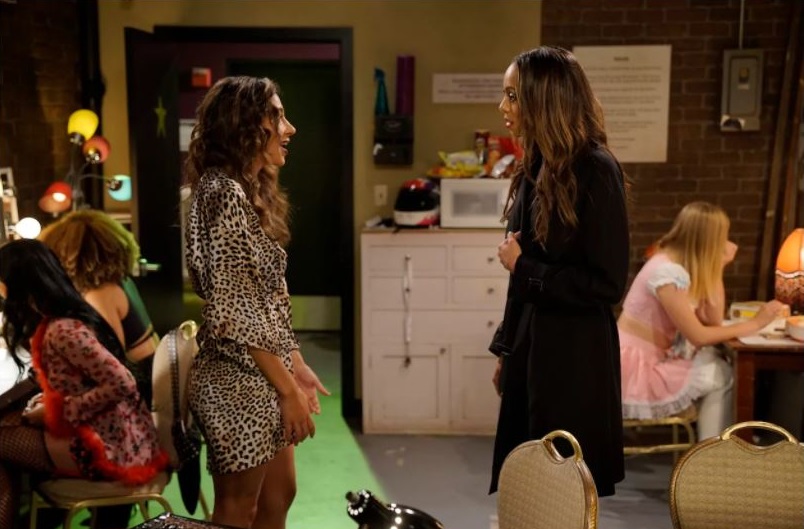 Jerrod and his family prepare to meet Maxine’s sister. They all have various concerns including if she has a nub or Asperger’s. He assures them that she’s just a quieter Maxine (much to his mother’s delight).

Bobby asks Jerrod if he’ll hook him up with her and he says no. Joe reprimands Jerrod as he’s always been a bad sharer (same) and tell him to let Bobby have sex with Maxine’s sister if he wants to. Maxine and her sister, Casey, arrive and while she’s in the bathroom, Bobby reveals that he thinks Maxine’s sister is a stripper.

Maxine thinks that’s ridiculous but that it’s fine because Casey has autonomy over her body. Cynthia suggests that they just knock on the door and ask, but Maxine stops the others (because it’s an evasion of privacy!) so they wait for her to get out the bathroom.

Nekeisha stops by and reveals that she was the one who took Bobby to the strip club when they got divorced. Casey, tells Maxine that she didn’t tell her because Maxine treats her more like a parent and less like a sibling. Everyone reprimands her for being judgmental and then Nekeisha suggests that Maxine try stripping so she can understand where Casey’s coming from.

Despite Jerrod’s subtle (very obvious) hints that he’s not okay with it, Maxine says she’s down. Later that night she gets ready for amateur night at the strip club. Jerrod confesses that he’s not okay with her stripping (duh), and she admits that she’s doing it so she can keep her family together. He lets her go, but instead of going to the club she stops by Joe and Cynthia’s house to ask for their advice. They tell her to pretend she’s from a poor family and attack the situation head on, but make sure they stick together.

Maxine stops by the strip club and she hashes it out with Casey. They agree to be there for each other, and Maxine goes through with stripping. Jerrod goes to the club to stop her, but the guard won’t let him in because boyfriends aren’t allowed in on amateur night.

Maxine comes out and Jerrod begs her not to do it, but unfortunately for him, the deed has already been done. Maxine manages to make a lot of money from her one night stint, enough for them to go on vacation so the two leave. Jerrod turns to let Maxine through the door first and who comes strolling by but Bobby…

This was a great dive into a semi-divisive topic amongst feminists, about whether being open sexually is freeing or demeaning to women. I loved this episode because of the character growth for Maxine. Admitting that she’s being hypocritical, and then later being called out for being judgmental gives her multiple opportunities for growth that she slowly takes on. I was excited that Nekeisha was the one that pushes Maxine toward that space because it goes so well with the episode from a couple weeks ago where Maxine tries to do the same thing with Nekeisha.

I also resonated with Joe and Cynthia’s reflection of their sons and how they grew up, in some ways adversity is a unifier in that many share the same experiences without even realizing it.

Bobby’s tragic but hilarious life is what led to his discovery of Casey in the first place. And if I’m being completely honest I was having trouble choosing a character, so I asked my brother and his choice was Bobby. But his line about Casey’s lap dance versus Maxine talking is problematically funny.

Charlie Barnett Plays the Role of a Lifetime in ‘Ordinary Joe’