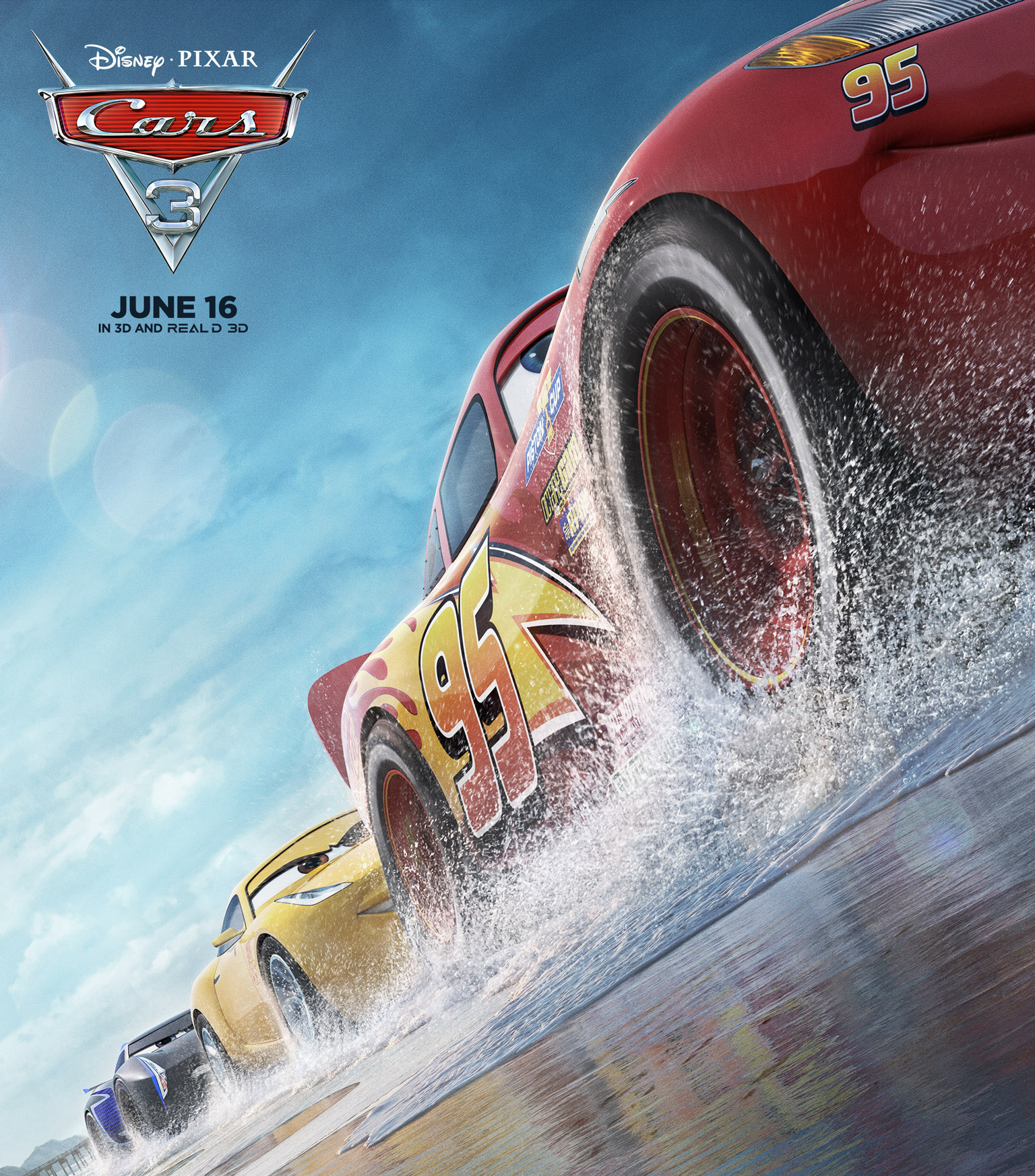 Pixar + NASCAR is a great combo. We know this. Ten years ago, they gave birth to a little red racecar named Lightning McQueen and the rest is history. A sequel and a spinoff later, the Cars franchise is bigger than ever. Now, Lightning, Mater, and the rest of the Radiator Springs gang are back, along with a few new faces, in Cars 3, coming to theaters June 16.

I attended the Cars 3 Press event last month at Pixar’s headquarters in Emeryville, CA and saw fantastic footage from the new film, as well as a screening of the new Pixar short, Lou.  The next day, we were taken to the Sonoma Raceway and given a “Lightning Eye View” as it were of the world of NASCAR. Here’s just a little of what I learned about Cars 3, NASCAR, Lou and Pixar.

But we knew that. The plot, from Pixar:

Blindsided by a new generation of blazing-fast racers, the legendary Lightning McQueen (voice of Owen Wilson) is suddenly pushed out of the sport he loves. To get back in the game, he will need the help of an eager young race technician, Cruz Ramirez (voice of Cristela Alonzo), with her own plan to win, plus inspiration from the late Fabulous Hudson Hornet and a few unexpected turns. Proving that #95 isn’t through yet will test the heart of a champion on Piston Cup Racing’s biggest stage! Directed by Brian Fee (storyboard artist “Cars,” “Cars 2”), produced by Kevin Reher (“A Bug’s Life,” “La Luna” short) and co-produced by Andrea Warren (“LAVA” short).

Remember when you first saw the track footage in Cars?  Remember the “Whoa, I can’t believe they got it to look so REAL!”? Well, that was then, and this is WOW.  I’m not kidding. As you can tell from the new trailer the world of Cars just got a little more real.

Except for the Cars themselves, which still look like Cars (not to be confused with cars), every scene looks like you could walk around in it.  And when watching the raceway action, Lightning’s accident scene looks so convincing, it is actually pretty scary. Is Pixar embracing photoreal in its animation now? It seems to be… except, you know, for the cars with eyes and mouths.

Yes, that was deliberately provocative. What I mean is that Cars 3 features the animators’ biggest challenge to date: mud. What’s so hard about mud, you say?

The texture is not liquid and not solid. The animators described it as “chunky oatmeal in soup.” To say it was a complicated process is putting it mildly, especially when you’re talking about a very long scene that is all about the mud, so to speak. So, it had to be perfect and it took months to get it there. But never fear, it’s Pixar. Of course, they got it right.

Between the two of them, they knew everything about Cars cars and NASCAR and kept things entertaining while laying out for us the origins of NASCAR, which curiously enough owes its start to Prohibition and moonshine. Who knew?

Strangely enough, I never wanted to be a member racing team or a pit crew. Shocking, I know. But after touring the inside of a race car trailer, driving a simulator, and coming in third place in a racecar tire changing contest with a great teammate and coaches, maybe I have a future in racing. And yes, I’m kidding.

I can’t help but be excited that Cars 3’s newest characters are voiced by actors Cristela Alonzo (Cruz Ramirez), Kerry Washington (Natalie Certain), Lea DeLaria (Miss Fritter), and Isiah Whitlock, Jr. (River Scott). I’m not afraid to say it — I like diversity in a cast.

Alonzo’s Cruz is a young female Car who, for a change, is not looking for love but looking to fulfill her own destiny, sending a positive message for little girls. “The Legends” are retired racecars who were friends of the late Doc Hudson. These Cars are inspired by actual racing legends, including NASCAR’s Louise Smith, who refused to be kept out of racing simply because she was a woman, and NASCAR’s Wendell Scott, who struggled to be allowed to race since African Americans were often barred from the sport. It’s great to see Pixar honoring these competitors.

“Okay, here we go. Focus. Speed. I am speed… I eat losers for breakfast. Breakfast? Maybe I should have had breakfast?…No, no, no, focus. Speed. Faster than fast, quicker than quick. I am Lightning.”

Lightning’s famous pre-race mantra wasn’t exactly what was playing in my head as I slid into the rear passenger seat of a real pace car at Sonoma raceway last month. My words were more like, “Oh my gosh, don’t let me die.” But you know, potato po-TAH-to. Anyway, my race car came in second. Maybe my driver should have been saying Lightning’s mantra? Or maybe it was the screaming…

Of course, “beginners” is a huge exaggeration, but it is director Dave Mullins’ and producer Dana Murray’s first time wearing their respective hats. Yet, they are still Pixar vets with a combined thirty-three years of experience with the studio. Mullins was an animator on several films, including Finding Nemo, Monsters, Inc., and The Incredibles. Murray started as a desk production assistant on Finding Nemo, worked on several films in a production capacity and was the production manager for Inside Out. But the road from idea to pitch to completion still took over five years.

As for the plot of Lou, I think it will be more enjoyable the less your read about it beforehand. I will say, however, it perfectly echoes a recurring theme in Pixar films: things are not always as they seem. Oh, and bringing tissues to the theater might be a good idea.