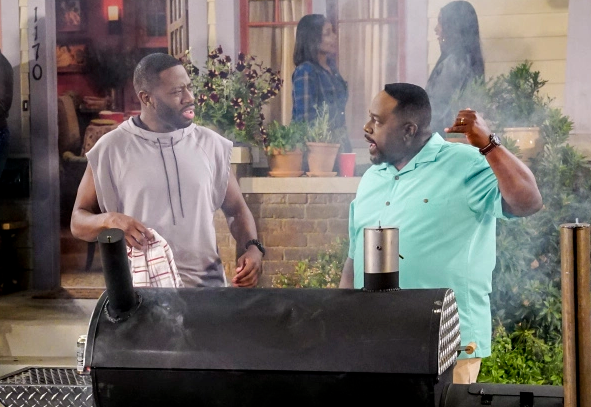 Three comedies and four new dramas have been added to CBS’ programming slate and although it is a network that has brought shows like Star Trek Discovery historically CBS hasn’t been known very well for its diversity.  However, CBS just added some more color this new pilot season — both in front and behind the camera. The Upfronts week has come in with a slew of cancelations and renewals, but here’s a look at the freshman class of new shows and it definitely has our interest piqued.

Producers Ava DuVernay and Greg Berlanti team up on a new series follow the lives of three vastly different Chicago families whose stories of loss and tragedy intersect in the wake of the mistaken shooting of a Black doctor by a white cop. The series is written by Caitlin Parrish and Erica Weiss and directed by Victoria Mahoney.

Brandon Micheal Hall stars in a humorous, uplifting drama about Miles Finer (Hall), an outspoken atheist whose life is turned upside down when he receives a friend request on social media from God and unwittingly becomes an agent of change in the lives and destinies of others around him.

A modern take on the classic series starring Jay Hernandez as Thomas Magnum, a decorated former Navy SEAL who, upon returning home from Afghanistan, repurposes his military skills to become a private investigator in Hawaii.

From Dick Wolf and the team behind the Law & Order franchise, a fast-paced drama about the inner workings of the New York office of the Federal Bureau of Investigation. These first-class agents, including Special Agent Maggie Bell (Missy Peregrym) and her partner, Special Agent Omar Adom ‘OA’ Zidan (Zeeko Zaki), bring all their talents, intellect and technical expertise to tenaciously investigate cases of tremendous magnitude, including terrorism, organized crime and counterintelligence, in order to keep New York and the country safe.

Welcome To The Neighborhood

A comedy about what happens when the friendliest guy in the Midwest moves his family (the Johnsons) to a neighborhood in Los Angeles where not everyone looks like him or appreciates his extreme neighborliness. Cedric the Entertainer stars as Calvin Butler, the Johnsons’ opinionated next door neighbor, who is wary of the newcomers, certain that the Johnsons will disrupt the culture on the block.

Damon Wayans Jr. and Amber Stevens West star in a comedy about a thirtysomething happily married couple who begin to reconnect with their younger, cooler selves when Cooper (Felix Mallard), an exuberant young pop star drawn to their super ordinary suburban life, unexpectedly moves in with them.

Nina Dobrev and Tone Bell star in a comedy about a woman whose vision of a perfect life with her adoring fiancé and his wonderful family is radically altered when her 16-year old, out-of-control half-sister unexpectedly comes to live with her.