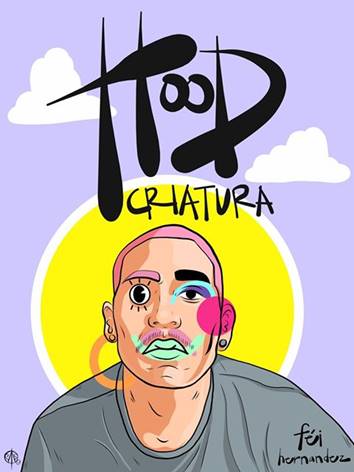 Author féi hernandez’s 2020 poetry collection from Sundress Publications unravels America in all of its rawness and brutality before the world’s eyes.

As an Inglewood-raised immigrant trans non-binary visual artist, writer, and healer, hernandez chose not to hold back when expressing the multigenerational pain of living in a discriminatory nation. Their work unpacks what it’s like to navigate life when you don’t align with the normative.

Their words carry shivers as readers traverse reality through the lens of marginalized communities that just want to be accepted in a world that has both stolen their homelands and marked them as alien.

Hood Criatura weaves readers in and out of brilliantly crafted poems to connect with hernandez’s journey as a person, hijx, and spiritual healer. The poems unapologetically explore the violences of gender constructs, gentrification, citizenship, racial injustice, and more.

They write about the billowing trauma that people of color have been experiencing for centuries while the world either ignores their plight or appropriates it. Their poetry amplifies the liberation movements and catalyzes revolution and decolonization.

The poetry collection has received praise from Patricia Smith (Pulitzer Prize finalist for Incendiary Art and author of numerous works), Marcelo Hernandez Castillo, (author of Cenzontle and Children of the Land), Meliza Bañales (Lambda Finalist 2016, author Life Is Wonderful, People Are Terrific, and many more authors.

Every stanza in hernandez’s work is a journey back to the homeland where many Black and Brown people are still firmly rooted, despite being plucked from their ancestor’s land. hernandez takes readers home, even if it’s not the home they remember or heard stories about from their elders. It’s the American homeland that can be cruel and malicious but also heartfelt and yearning.

One of the first poems is called, “Blistering Feet, Under Blistering Sun.” It personifies America as plucking Black and Brown people from their homelands and “planting them” in America without their consent. Through this lens, America is a ruthless gardener that has no regard for the lives of the vegetation that it steals. hernandez highlights the ways in which America is willing to take from immigrants and people of color and watch as they “rot.”

The poem goes on to analyze how undocumented immigrants are particularly placed in a role of production for the United States while they are also stigmatized as being alien.

Many of the other poems also take on different aspects of immigrant life. hernandez incorporates both Spanish and English, with Spanish often coming first, in spite of how it has historically come last in America’s Eurocentric linguistic domination. They use Spanish with a soul and rebellion that is echoed throughout each poem.

The poem “Mexican Curiós” is particularly striking, as hernandez celebrates the undefinable and fluid Mexican identity and how it has always been an oddity on American soil but must embrace self-love either way. It includes the powerful stanza, “My Little Son you are a mexican curiós [meaning: oddity], always out of place and no one will know what mud you sprout from or what land you’ll dig your tiny feet into next, so little beast, sway your hip to the drumming pulse of wild grass by the beach, look at the beautiful beach, we made it, mami said, all in spanish.”

hernandez takes readers to a place of radical acceptance that is difficult to find in a society that constantly demands labels. The categories of being “Black,” “Immigrant,” “American,” “Citizen,” “Hood” and “Illegal” are introduced in “Mexican Curiós” as well. They represent the way that people of color are inundated with stereotypical assumptions about who they are and how their identities should exist.

hernandez pokes at the notion of the American Dream, as they assert that this so-called dream thrives on the persecution of Black and Brown communities. The intersectionality of the poetry collection reminds readers that to be a person of color often means facing a variety of struggles due to the overlapping experiences that come with it. Each poem reminds audiences that marginalized communities are never one thing at a time, reduced to a monolith or homogenous experience.

hernandez doesn’t choose to only accept and explore a fraction of who they are to perform work that is more palatable or assimilated; they embrace every single color of what it means to find one’s self, which is no easy task.

The reason that these poems resonate so much may be that they connect readers through a common thread — belonging. While white American has had the most privilege when it comes to fitting in, belonging is highly important for most people.

While hernandez depicts experiences from those living outside the margins, they do so in a way that allows people to connect the dots and see the entire raw and untamed picture of American for what it is, refusing to hide its true nature.

From homeland to colonized land, to native tongue to Spanish American vernacular, hernandez uses their poetry to decolonize and offer pathways to rebirth.

Within the pages of these poems, there is home. It may never be the home that the ancestor’s remembered or that the colonizers almost destroyed, but it’s a home that speaks the truth of America’s ruthlessness.