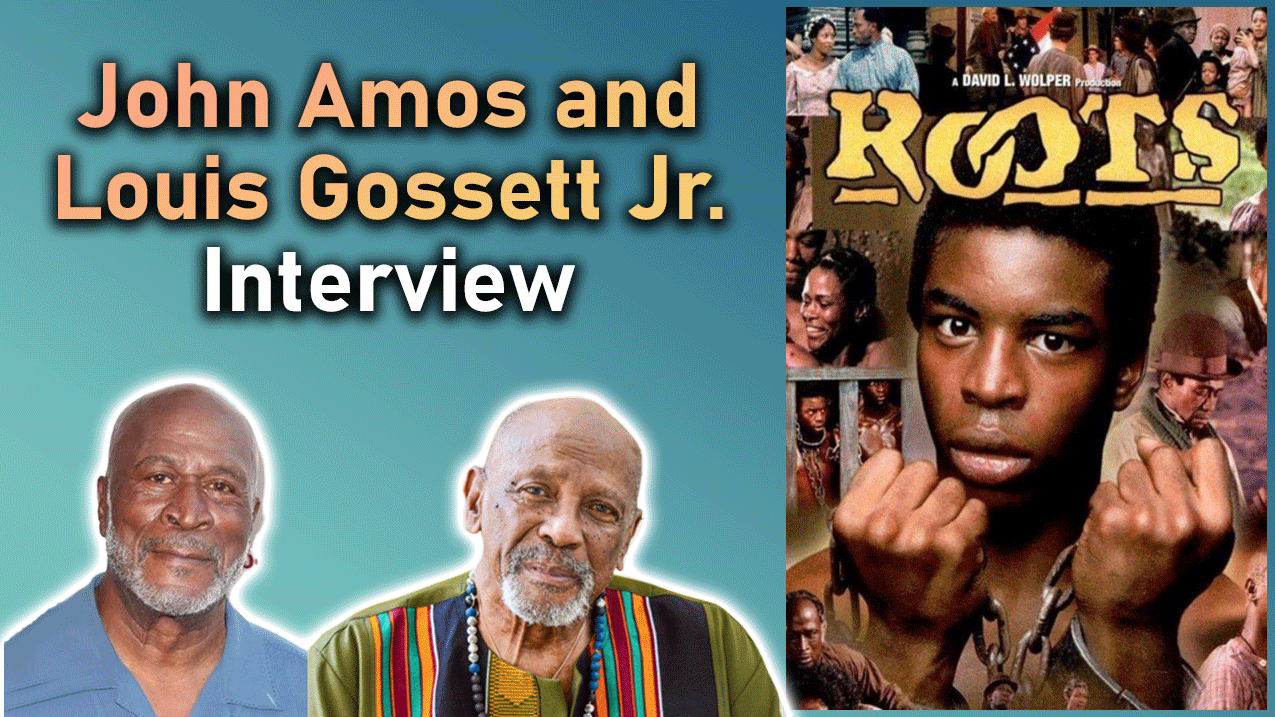 45 years ago this past January, the legendary episodic miniseries Roots made its debut in the homes of Americans everywhere. The series changed the trajectory of how we see race, our past as Black Americans, and the trauma our ancestors endured.

As Black History Month comes to a close, we are especially proud and honored to have interviewed the greats of cinema and TV; actors John Amos and Louis Gossett Jr.

John Amos is an actor known for his role as James Evans, Sr., on the CBS television series Good Times and for his portrayal of the adult Kunta Kinte/Toby in the 1977 miniseries Roots, for which he received an Emmy nomination.  Amos’s other television work includes The Mary Tyler Moore Show, a recurring role as Admiral Percy Fitzwallace on The West Wing, and the role of Washington, D.C., Mayor Ethan Baker in the series The District. Amos has appeared on Broadway and in numerous films in his five-decade career. He has been nominated for a Primetime Emmy Award and an NAACP Image Award. On film, he has played numerous supporting roles in movies such as The Beastmaster (1982), Coming to America (1988), Die Hard 2 (1990), and Coming 2 America (2021).

Louis Gossett Jr. is an icon in the film and television industry with more than 400 acting credits to his repertoire.  He is most known for the role as Gunnery Sergeant Emil Foley in the 1982 romantic drama film An Officer and a Gentleman for which he won the Academy Award for Best Supporting Actor.  Gossett was the first black actor to receive the Academy Award for Best Supporting award. Gossett also won an Emmy Award for his role as Fiddler in the 1977 ABC television miniseries Roots.  Other notable credits include A Raisin in the Sun, Skin Game, Enemy Mine, Jaws 3-D, Toy Soldiers, Iron Eagle, Tyler Perry’s Why Did I Get Married Too? the Return to Lonesome Dove miniseries, the HBO film Lackawanna Blues and the Emmy-winning HBO series Watchmen.

Featured in the video below Louis Gosset Jr. discusses a powerful moment working with the late Vic Morrow in one of the most powerful scenes during Kunta Kinte’s abuse. Gosset Jr. further expands on how he was key in the role of naming Kunta Kinte and it is a legacy he keeps with him to this day. John Amos dives into the pushback against critical race theory taught in schools and the erasure of Black history being introduced in our educational system.

Based on the best-selling novel by author Alex Haley, Roots chronicles the progress of Haley’s own family across many generations, from the kidnapping of an African warrior by American slave traders to eventual post-Civil War freedom.  Roots was nominated for 37 Emmy’s, winning nine awards, and also was awarded Best Television Drama Series at the Golden Globes.  The original broadcast was seen by an estimated 140 million viewers total, more than half of the U.S. population in 1977.  It was the largest viewership ever attracted by any television series in U.S. history.

Philadelphia Showed Tons of Brotherly Love for the Roots Picnic 2019