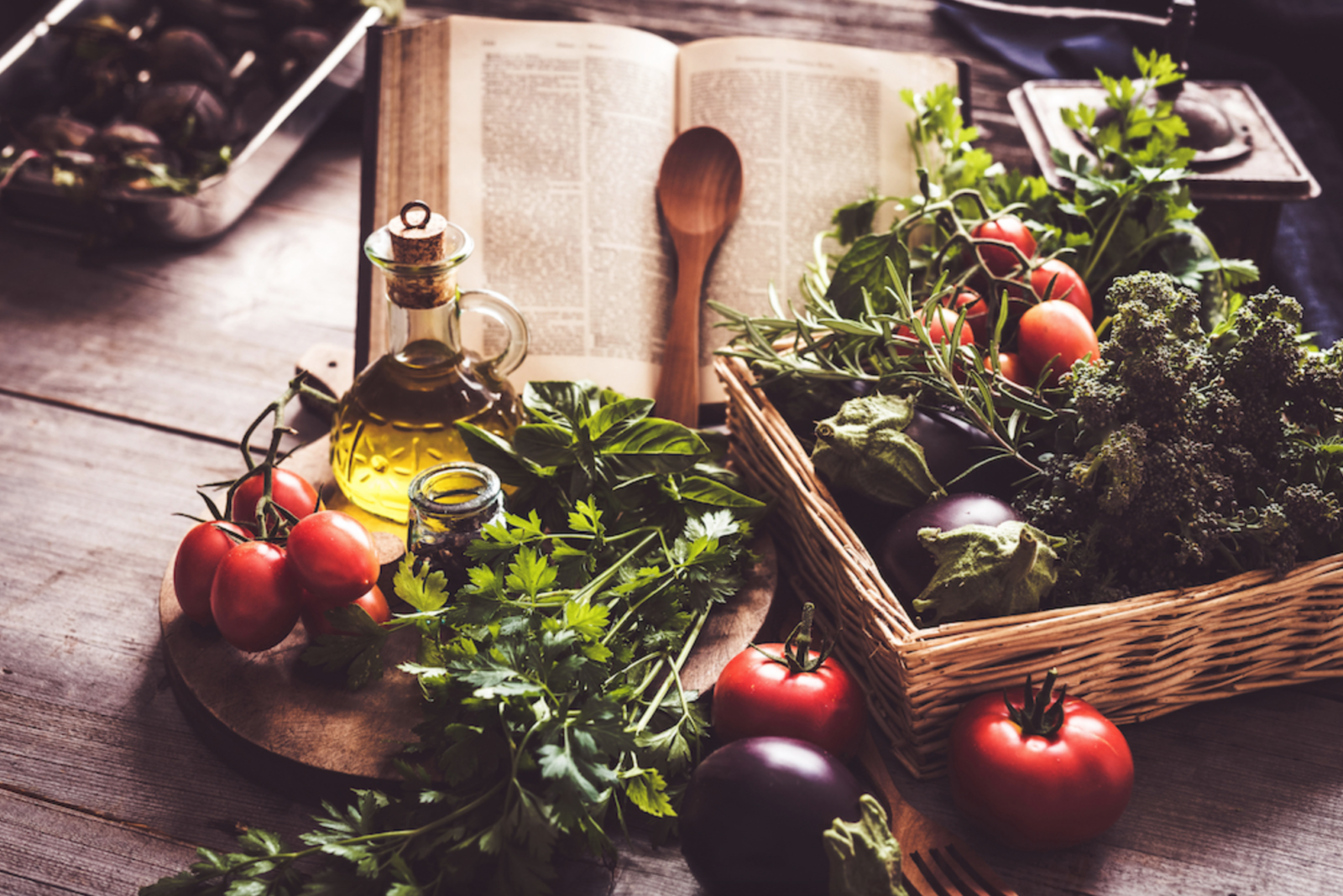 October is national cookbook month. In an era where recipes are shared via social media, cookbooks are still just as relevant as they were in Rome during the fourth century.

According to Guinness World Records, the oldest printed cookbook is Bartolomeo Platina’s De Honesta Voluptate et Valetudine (On Right Pleasure and Good Health), which was printed in 1474, about 20 years after the first mechanically printed book, the Gutenberg Bible, was printed. But the first recorded cookbooks may be recipes carved into clay tablets found in what was Ancient Mesopotamia (modern-day Syria and Turkey), which are thought to be from 1700 BCE.

Western cookbooks originated from the European monarchy. Frome of Cury (The Rules of Cookery) was a collection of recipes created by the master cooks of England’s King Richard II for the cooks to maintain continuity when preparing meals for the royal family.  Cooks who were employed by the upper classes had to be able to read and write to manage the kitchen in a castle or large manor house, and these early cookbooks were vital to running the kitchen.

In most global cultures, recipes were passed down from generation to generation by cooking the recipes together in community. On both sides of my family, I had grandmothers who were the best cooks in their communities. They both passed away long before I was even thought of and I never got to meet them, but by chance, I inherited their cooking genes. My mother was a military wife and the best cook in whatever community she was a part of. But Mom never really taught me how to cook; she wanted to keep her culinary talents to herself. She was very particular with her cookbooks. There were a few old ones I was allowed to read that didn’t have many photos, so I’d read those cookbooks for hours, creating images of the food in my imagination. The cookbook I loved best was Joy of Cooking by Julia Child.

My love affair with cookbooks continued when I was on my first theater for young audiences tour. To save money, a bunch of us actors lived together in a duplex apartment. Some of us would pool our groceries, and I’d cook dinners for us. I’d simplify those recipes I’d memorized from the Joy of Cooking using ingredients that were within our budget and make enough food so we could all have at least two days of leftovers to stretch out dollars. When I moved to New York City, I was a live-in nanny for a family of four who had a contemporary art gallery in their house, so I branched out, buying B. Smith’s cookbooks to prepare meals. I started catering for the gallery using those cookbooks and later adding my flavor.

For many chefs and talented home cooks, the introduction to the culinary world is through cookbooks. You learn the foundation by cooking recipes from cookbooks, and once you know the basics you can improvise. Whether they had mothers who loved to cook and used the kitchen to pass on family recipes or for those latchkey kids from the ’70s and ’80s with working parents or single parents who had to make dinners to help out after school while single parents were still working, cookbooks have played a vital part of life.

I’ve always cooked at home because my rent in New York City always took up about 55 percent of my income. Cooking at home was just one way I could stretch my paychecks to live as a single working actor in the city that I loved. In 2005, I was fed up with the acting grind and decided to become a vegan chef. I had never been to culinary school but acted my way into getting a job at a popular cafe in the West Village back then. I studied chef Myra Kornfeld’s Voluptuous Vegan and the Healthy Hedonist cookbooks. I practiced cooking those recipes at home to learn how to work with seasoning plant-based proteins and cook vegetables and fruit in deliciously innovative ways. The cafe was a wonderful incubator for plant-loving cooks. So many Black vegan chefs who have popular social media accounts and cookbooks today used to come through that cafe for nourishment after yoga classes.

After dealing with some health issues caused by over 25 years of vegetarianism and veganism, I had to remember how to cook animal protein, so yet again, I turned to my favorite cookbooks, using the recipes as a foundation for this next stage of eating the foods that best nourish my body.

The secret to being a good cook is that it takes time, patience, fresh ingredients, and practice. Let’s face it, when you are responsible for cooking for your household, your loved ones often take you for granted. Everybody wants to eat good food, but very few folks want to do the effort and work to develop the skills to be a good cooks. Cookbooks are not only instruction manuals for home cooks, they can be the tool that brings creative expression to a mundane daily task.

With cookbooks inspired by our favorite TV shows and films like Black Panther: The Official Wakanda Cookbook, we can bring cosplay into the kitchen by creating delicious easy-to-cook recipes made from affordable ingredients that are accessible, delicious, feel good in the body, and are culturally relevant.

Cookbooks make cooking an adventure. With the holidays just around the corner, take some time to investigate cookbooks and commit to cooking with your loved ones, creating new culinary traditions. Celebrate cookbooks this October. Your belly will thank you for it.