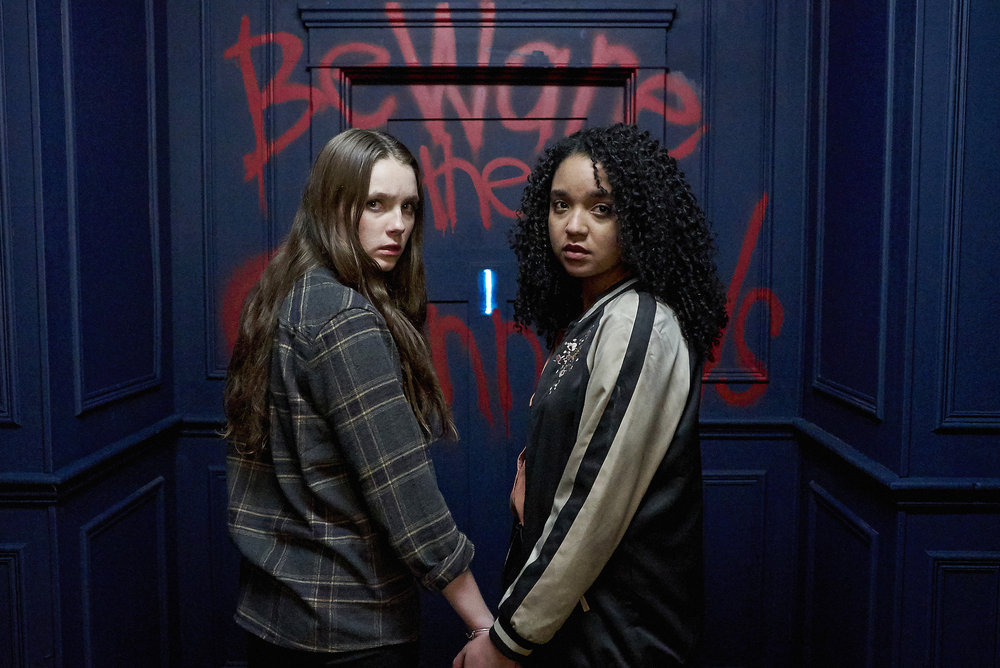 Channel Zero is an American horror anthology series on SYFY and the last episode of season 2 premiered October 25th. With only six episodes, it packs a powerful punch and every horror show wishes it was like Channel Zero. It has coherent storylines, somewhat diverse characters, and it’s pretty terrifying.

No-End House, the title of the second season’s story, tells the story of Margot (Amy Forsyth), Jules (Sweet/Vicious and The Bold Type’s star Aisha Dee), JD (Seamus Patterson), and Seth (Jeff Ward), who visit the No-End House, a bizarre house of horrors that consists of six disturbing rooms. The foursome make their way through the house and leave the Fifth room only to find that they’re actually in the Sixth room and actually inside the House itself. They have to fight against “cannibals” that want to eat their memories and keep them within the house forever.

The story is compelling and will leave you on the edge of your seat. There is one major problem with the show and it’s in the treatment of it’s leading black woman character. It took until Episode 5 for me to realize the issue, but now it’s obvious we’re dealing with a tropey example of the Black Best Friend.

In the series, Margot, our white lead, is having a hard time. Before the friends enter the house, she was struggling with the death of her father the year before. At one point in the early part of the season, Jules, her black best friend, pulls back and Margot feels all alone. She’s still salty about this, so when her dad “returns,” as a sort of Other Father, Margot is quick to ditch Jules.

Now Margot wanting another chance with her previously deceased father isn’t terrible in itself. The issue comes with her treatment of Jules and Jules’ lack of agency or fullness of character.

As the season progressed, Margot has been indifferent to Jules’ pain. I understand that Margot’s dad died and that grief can take you to some dark places, but Margot does not seem to care about Jules’ well being at all. We can see this when we parallel how they treat each other. When Jules realizes that they’re not in reality but actually in the 6th room, she immediately tells Margot and tries to get her to leave. In turn, Margot tells her that Jules doesn’t have a real dad so she doesn’t know what it’s like to lose one. Jules finally leaves when Margot tells her that she doesn’t need her.

When Jules spends an entire episode rescuing Margot from the Other Father and at the first chance she gets, Margot leaves Jules to spend time with Seth. At this point, Jules has already lost one memory to the hungry house and is obviously not all there, but Margot doesn’t seem to care or notice.

By the end of Episode 5, Margot has left Jules to fend for herself, count ’em, six times. Margot only needs Jules when her father or Seth aren’t there. Also in the 5th episode, Margot goes with the Other Father and Seth into the No-End House leaving Jules to wait an entire year for the house’s return, because like a good friend, Jules is going to rescue Margot.

Tvtropes.org states that the Black Best Friend Trope is a black character whose role revolves almost entirely around a white character and this describes Jules to a T. The only background information we have on Jules that does not revolve around Margot is that her mom works a demanding job and smokes weed, she has a sister and a dog, she had some sort of sexual awakening when she read about a Succubus, and she has no shame about casual sex. That’s not much of a background considering we don’t even know her mothers or sisters name and any character development is about coming to Margot’s rescue.

Which is the other issue in this show: Margot is a Damsel in Distress. Margot is waiting to be rescued from her grief, from the Other Father, from Seth, from the No End House and it takes Jules to pull her out of the house not once but TWICE to finally bring her to safety. And because of Margot’s treatment of Jules, I don’t have any sympathy towards her and I am actually annoyed that Jules risked her life to save her. There was literally nothing that Margot did to show she was a good friend and if that were my friend, I would’ve left their ass in the house a long time ago.

I hope that with the next season of Channel Zero titled Butcher’s Block they may fix some of these issues, but considering the only characters we’ve seen in promotional images so far are white, I wouldn’t hold my breath.