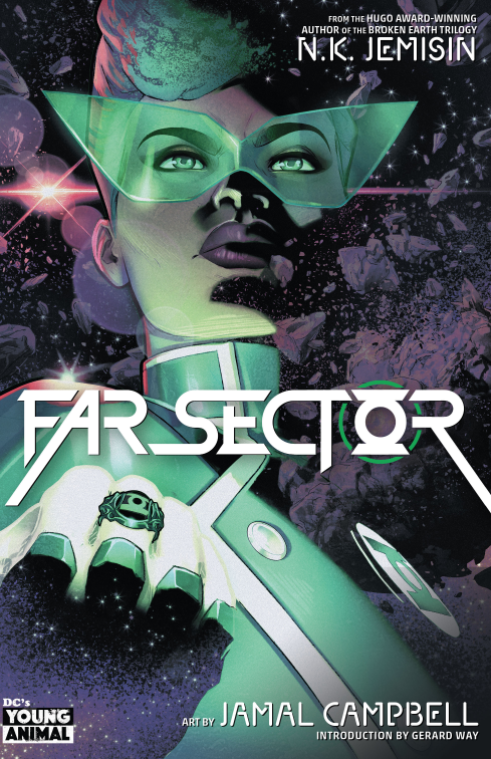 N.K. Jemisin is one of TIME magazine’s 100 most influential people of 2021. She’s an award-winning best-selling author and the writer of the first Black queer female Green Lantern, Sojourner “Jo” Mullen,  in DC Comics Young Animal’s Far Sector. BGN spoke with Jemisin on the phone about the upcoming release of a collection of the Far Sector comics in mid October 2021.

Green Lantern. What excites you the most about this upcoming release of the collected edition?

The fact that a lot of my book readers are not in the comics world and they don’t do the whole “going to a comic book shop every month to get the ‘floppies,’” as they’re called — they’re not interested in that; they want a book. A lot of my readers have basically told me flat out, “Look, I understand it’s important to preorder and all these other things to do with buying comic books, but we’re book readers. We’re your readers.” So they’ve been waiting for the chance to get this compilation. A lot of them are going to finally have the chance to see the comics that I’ve been working on and Jamal and Deron and all the other great folks who DC helped me put together. I’m just excited to have my book audience finally actually reading it.

Your Green Lantern, Jo, is fighting crime in a universe where people have not had any feelings for 500 years. How did this really brilliant storyline come to be?

Gerard Way came up with the seed of the idea. I wanna make it very clear it was his idea, and I grew [it] from that. I think it was after [my] second Hugo maybe? Gerard reached out to me and told me about this idea that he had for a brand new Green Lantern that would be part of the Young Animal line. He wanted to do a Black female Green Lantern in a world that didn’t have love — specifically love. I was like, “Well, you know it’s hard to separate love from other emotions. Why don’t we just cut out emotions entirely and play with that concept?” This is a standard science fiction concept. You’ve heard of Vulcans and Star Trek and so on. So it’s not really super unique or anything. Dyson Sphere is also a was technically a Dyson swarm. But anyway, Dyson stuff is also common science fiction. The cyberpunk world is science fiction. All of this stuff is. I’ve been a sci-fi fan as much as a fantasy fan for most of my life. And so this was really a chance for me to play with all the coolest stuff — all the cool toys.

Your Broken Earth trilogy series is been acquired by Michael B. Jordan’s production company Outlier Society as producers of the film. How do you feel about working with this amazing production team?

I’ve only just started working with them. So far it’s interesting because I am writing scripts for the first time in my life. Actually, scratch that. I wrote comic book scripts but now I’m writing film scripts. It’s very different, but it’s interesting to realize that working on Far Sector has been great preparation for working on another visual media. It’s going a lot easier for me to work on this film script after having done comic book scripting than if I had done it cold. I’m learning how to work with other people on visual stuff when I’ve never really thought of myself as a visual writer. Working with Jamal really helped with that.

How has the process of adapting your books into screenplays been? Any challenges?

I’m only just starting that process so it’s difficult for me to speak to challenges just yet.  But the biggest challenge I’ve had so far has been trying to get the right film screenplay-writing software.

Unfortunately, while writing science fiction, you’ve had to deal with intense cyberbullying. With the film on the horizon, how are you preparing yourself for this whole new level of visibility? Or are you?

There’s no point where you’re [completely] safe. I have reduced my vulnerability to things like that as a result of having dealt with previous cyber attacks. I know enough to protect myself against a lot of the casual brigading, but part of the issue is I’m basically not on Twitter anymore. I pop in every few days to remind people I’m not dead. Otherwise, I’m done with social media. It’s been a slow realization that I’ve gotten too big to just talk freely on social media anymore. I can’t really be myself there, so there’s no point in being there. So, I’m not going to see a lot of what people decide that they want to say about me. and that’s good for me. I’m using new techniques to try and guard myself, financially and in every other way. That’s just part of reaching a certain point of visibility.

Are you preparing yourself for the good things that will come from this new level of visibility?

I’m not sure there will be good things. You know I am a regular woman. I like to go to the grocery store and walk down the street. Nobody recognizes me I am happy with that. So one of the things I have been doing is saying no a lot more to media things like interviews. I’m gonna be even more selective about which media interviews I do going forward because I want to continue to be able to walk down the street and not get recognized. So it means that I’m gonna turn into a little bit of an eccentric recluse, but that will add to the mystique.

I hope you’ll still let BGN in because we love you so.

Well, I like you guys so yes, I do plan to keep on doing these.

Just the fact that it’s fall. I feel like autumn is my favorite season. It’s a reminder that we’ve made it through the bulk of the year, and there’s just the general aura of fall. The air smells a little sugary from all of the trees turning leaf colors and the light starts to take on a different color. Things like that remind me that the world is bigger than media and work and books and things like that.

Michael B. Jordan Teams up with Seth Rogen and Evan Goldberg on a New Amazon Series