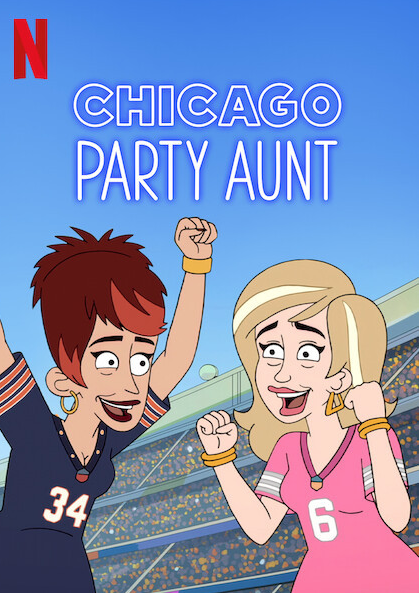 Chicago Party Aunt is a nonstop riot. This adult, animated, eight-episode Netflix series is one of the crudest and loudest that has been released so far. The creators Chris Witaske, Jon Barinholtz, and Katie Rich have stumbled onto a formula that works well for this show — a combination of Chicago locations, sexual innuendo, and pushing the boundaries with dangerous antics. All these together develop a storyline that is riveting — and, at times, garish — that rivals other vulgar shows.

The Chicago Party Aunt herself, Diane Dunbrowski (Lauren Ash, seen in She-Ra and Superstore), is a wretched and irresponsible adult woman who has little concern for the consequences of her actions. Diane, always ready with a quick and slightly gross comment in any conversation, is a part-time hairstylist, hardcore partyer, and Chicago native with a thick Midwestern accent. Her quaint apartment is in Wrigleyville, which overlooks the stadium Wrigley Field. This ideal location is only available to Diane because her headstrong sister Bonnie (Jill Talley) and her unassertive husband Mark (Ike Barinholtz) own the property.

The show establishes just how complex Diane isn’t. Much of Diane’s surprise and dismay comes from the fact that her neighborhood has gentrified. The hair salon she works for part time has been bought out by a hipster chain. The first episode reveals Diane’s insensitive nature when she forgets her own wedding anniversary. Her husband Kurt (Witaske), who tolerated her disregard for years, decides to move out.

Since Diane is unable to afford her place now that her husband has moved out, Bonnie offers her sister a compromise: she asks Diane to look after Bonnie’s son Daniel. Daniel (Rory O’Malley), a gay teen who has been sheltered his whole life, gets a first-rate education in life from his aunt Diane after moving in with her. Daniel has recently turned 18 and is ready to explore the city that only his aunt knows. He wants to experience life before going off to Stanford.

Almost every episode begins with a narration from Diane, and in every episode, she also somehow manages to mess things up and complicate everyone’s situation. These entertaining misadventures make her relatable and endearing. What makes this series so enjoyable, outside of Diane’s unfiltered opinions, are the number of references to the Midwest. From the hotdogs, pizzas, even parks that are local, Diane always manages to fit in a Chicago reference whenever the situation calls for it. That’s part of the charm that works for this show. While a lot of the references are local to Chicago, when Diane makes a joke about an animated version of something, it feels like we are all in on the joke with her.

While not every episode is gold, a few definitely stand out from the pack. Those episodes usually involve Diane’s boss and the back-and-forth between them. Gideon (RuPaul Charles), Diane’s snobby manager at an upscale hair studio, delivers comical one-liners. In Episode 2, “Helicopter Aunt,” Diane is about to fail an exam she didn’t study for. She ultimately gets a phone call about a family emergency, so she leaves the test half-finished. Her long monologue leads her coworkers to assist her. She inevitably passes her test and triggers Gideon’s response, “To be a white woman in America.” Gideon does make multiple appearances, and every time he does the show manages to get better. His appearance in the Halloween episode is epic, with one-liners to match. When Diane is debating on taking Gideon to a gay Halloween party, Gideon’s response is fabulous: “The idea that I would want to go with your flat ass is laughable.”

The gay characters are really what pull the show together. Between Gideon and Daniel at both the home and work, it’s no wonder the jokes keep getting better. While Daniel is a shy and awkward adult who is highly susceptible to bad advice, he nonetheless attempts to experience what it means to be gay in Chicago. This often leads to terrible choices and even worse outcomes. Gideon, on the other hand, is a recent transplant from New York having a hard time adjusting to the Chicago area. His one gay date turned out as so many gay dates have, with an insult and a bill for your own food. Oh, Gideon, will you ever find love in the big city?

The sensational and irresistible allure of the show has a lot to do with the number of times that a joke can make you cringe and laugh at the same time. Diane is not above an obvious joke or a gross comment about how maxi pads can be used instead of going to the bathroom. Her comments along with an incredible and wacky ensemble help build and fill out the animated world. Though this series does not cater to those with a refined sensibility, it does have its appeal for anyone who is looking for a quick laugh.

Chicago Party Aunt is now available for streaming on Netflix.