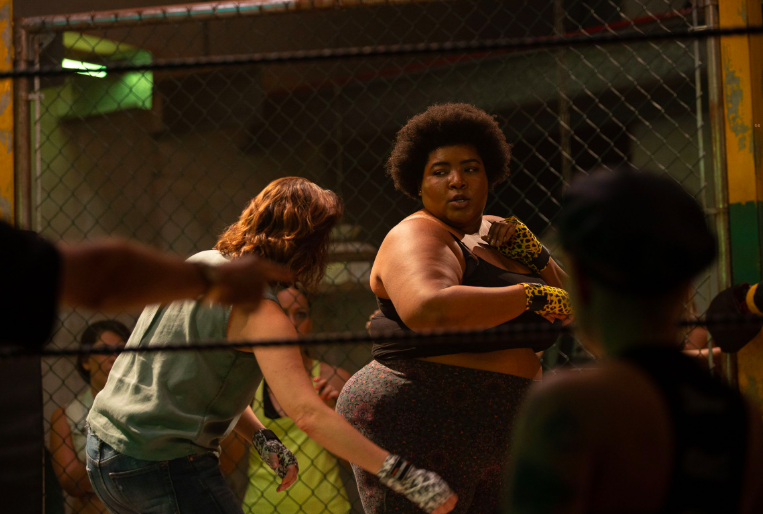 Chick Fight tries to prove that it is far from the typical boxer movie. Unfortunately, it proves the opposite. Complete with a plot that seems to be copied and pasted from the successful boxer films of the past, Chick Fight showcases themes and characters that are stereotypes of what viewers are already familiar with.

Directed by Paul Leyden, the R-rated film sadly has a male presence throughout it. The women in the movie are meant to be inspirational and driven. With a male-written screenplay by Joseph Downey, the female characters feel based on who solely men think women are — not truly who we are from an essential female perspective.

The movie focuses on Anna, played by Billions star Malin Åkerman, whose life seemingly falls apart in a day. In order to help bring her spirits up, her best friend and cop Charleen, played by comedian Dulcé Sloan, brings her to a fight club where women not only fight it out but hug it out. It is meant to be seen as therapy for the women to get their aggression out and also have a support system, something that Charleen felt Anna needed after her life literally blowing up before her eyes.

However, there are women trying to change the “kumbaya” vibes of the fight club. Actress Bella Thorne plays Olivia, the no-nonsense fighter who comes for Anna and tries to change the club into pain and destruction rather than therapy. The conflict between the two characters comes to a head when Anna challenges Olivia to a fight.

Despite the themes of female empowerment and fighting the odds, all of the characters in Chick Fight seem very two-dimensional. There were no deep dives into the emotional or mental sides of these characters — the viewer sees them take life’s hardships with a stereotypical “aw dang!” and then move on to the next conflict. Even Anna, whose life beats on the hardest in the film, does not seem to get very emotional about what is happening to her. We do not really see her break down or discuss how life is truly affecting her emotionally or mentally.

The plot follows the same themes of every boxer movie ever made — boxer goes into hardship, needs release, finds trainer, finds enemy to fight, struggles in training, doubts, has the big fight, and experienced a heart-warming conclusion. There is nothing special about the plot of Chick Fight despite its attempt to make it more appealing to a female audience by sprinkling current themes of “girl power” and standing up for yourself.

The jokes were reminiscent of American Pie — full of innuendos and gags but nothing that stood out as original. The movie heavily relied on making jokes about the female characters’ appearances and lives, which seemed opposite of the united stance the movie was trying to exhibit.

There were plot holes that were not always obvious but did not add up. For example, Anna hits two men in the face at a bar when they begin to harass her. She lands a perfect punch and kick. However, when she begins training with Murphy a few scenes later, she no longer has the martial arts skills she previously had. There were inconsistencies with how much training Anna had.

The love interest of the film, Dr. Roy Park, played by Kevin Connolly, is definitely not the “Prince Charming” viewers would think. It seemed that he was more interested in the physical side of a relationship with the girls than anything else. His character was an attempt from the director to make him a sex symbol that instead made him look like a jerk who got lucky in the end.

Olivia was trying too hard to be the “bad girl” of the group. Bella Thorne while playing this character looked like she was bored, executing her lines with a nonchalant tone and then jump-cutting to her beating the mess out of another girl. There could have been more development into her character to make her feel like a genuine villain in the story.

What was most disappointing was how Charleen served as nothing more than the “sassy Black friend.” As soon as the viewer first sees her with Anna, she is spitting out jokes about her sex skills and talking negatively about Anna’s sex life. She has the same shtick of every sassy Black friend before her. She serves as the sidekick with the raunchy mouth and nothing more. I would have loved to learn more about her backstory in fighting and even as a police officer. Instead, the team behind the movie only used Charleen to say jokes that continuously hit flat.

Chick Fight greatly misses its target of being a raunchy comedy with deeper themes of female empowerment. Instead, it feels like boxer movie backwash with characters that viewers not only could not relate to but were unrelatable in the first place.

Interview: Dulcé Sloan is Breaking All Kinds of Barriers in Comedy