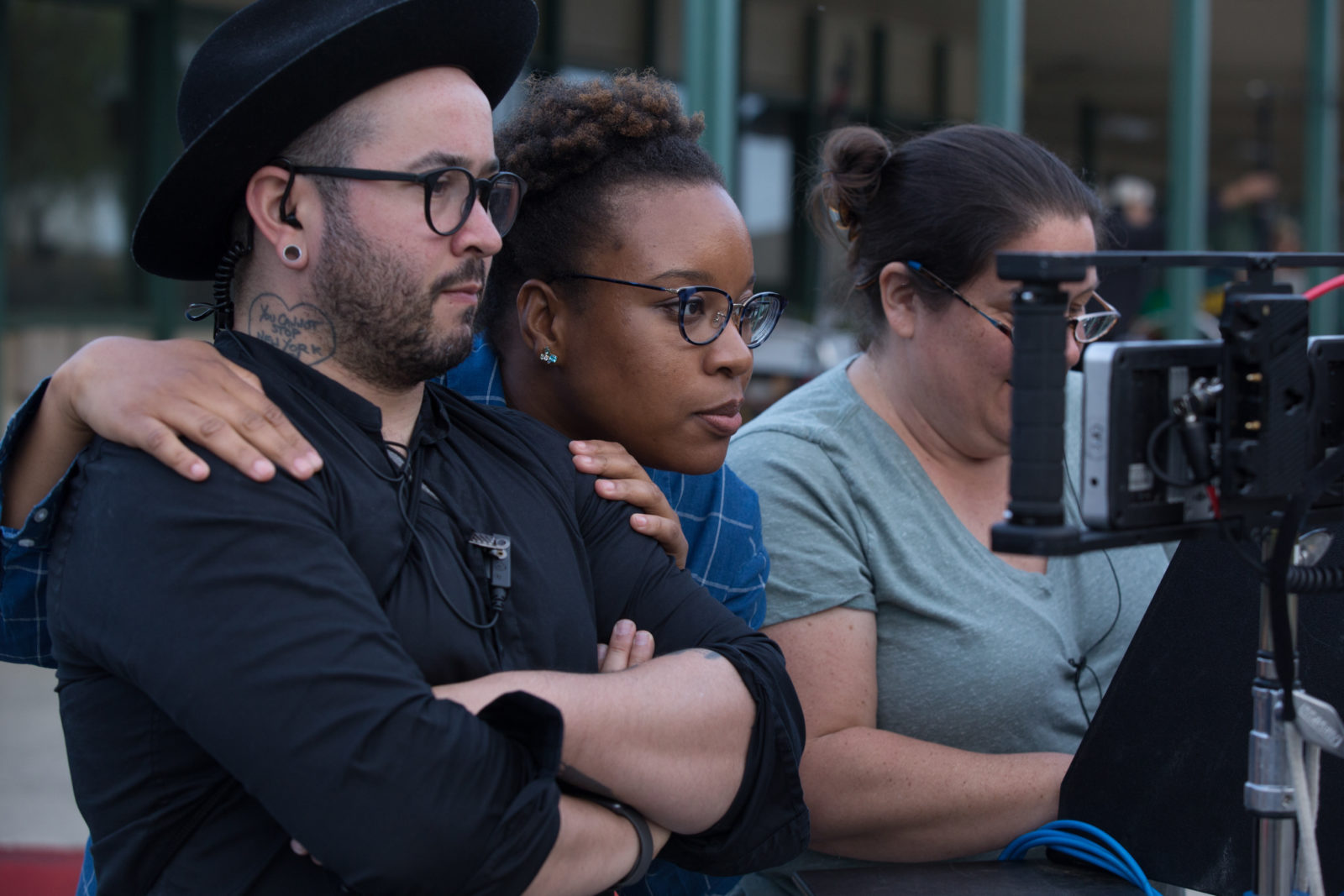 Alfre Woodard plays the lead protagonist Bernadine Williams — who has endured years of carrying out death row executions as a prison warden. They have taken its toll and she prepares to execute yet another inmate (Aldis Hodge). Bernadine must confront the psychological and emotional demons her job creates, ultimately connecting her to the man she is sanctioned to kill.

Writer/Director Chinonye Chukwu spent four years researching for Clemency and was inspired to create this story after hearing about the Troy Davis case.  Chukwu is also the founder of Pens To Pictures, an organization for women who are incarcerated and teach them skills in screenwriting, directing, and production. Chukwu doesn’t just create the story of what prison does to the human psyche, she lives it through her social justice work — and is now bringing it to the big screen.

Chinonye Chukwu sat down with BGN to discuss her script to screen concept, her work as an activist, and what’s next for her.

Can you give our readers kind of an elevator pitch of what the film Clemency is all about?

Clemency follows a prison warden’s emotional and psychological down-spiral as she prepares to execute a man on death row. And Alfre Woodard plays the warden and one of the men who the film focuses on who’s on death row is played by Aldis Hodge.

You mentioned this is a film that’s viewed through the lens of a prison warden, which oftentimes we don’t see those kinds of stories, so why did you want to center the narrative over this kind of character?

I was really inspired to tell this story from this perspective the morning after Troy Davis was executed in a Georgia state prison. Troy Davis was a black man executed on September 21st, 2011. Leading up to his execution, hundreds of thousands of people around the world were protesting against his execution, including a handful of retired wardens and directors of corrections. And that group of individuals, wardens and directors of corrections, were from around the country and they wrote a letter to the governor urging for clemency on the grounds of not just Troy’s potential innocence but also because of the emotional and psychological consequences they could talk about from first-hand experience they knew that executing Troy would have on the prison staff.

So the morning after he was executed, many many people around the world were feeling a lot of things including myself, like sadness, anger, frustration, trying to make sense of this. And then I thought to myself “If so many of us are navigating these kind of complexities of emotion, what must it be like for the people whose livelihoods are tied to the taking of life? What are those emotional and psychological consequences those retired wardens and directors of corrections were speaking of?” And that really was the seed that was planted.

In addition to the Troy Davis case, were there any other cases that inspired you when you were creating this story?

No. I do want to be clear that this is not an autobiographical story, this is not based on any real characters or cases. This is not even about a case. I spent several years, about three and a half, four years talking with many, many, many wardens and retired wardens and directors of corrections and chaplains and men on death row and men who were exonerated from death row and women who are incarcerated, women who were recently released and death row lawyers and all kinds of people who were kind of part of this ecosystem of incarceration over the years.

Talk to us about that. You spoke to many inmates who were on death row, serving decades long sentences for crimes that oftentimes they claim they were innocent of, can you share with us what that experience was like?

It really expanded my capacity for empathy, for not defining people by their worst possible acts. There are many people who are incarcerated who are guilty of certain crimes and my approach to making Clemency was this is not an innocent or guilty case, this is really about humanity. And so talking with a lot of the people that I spoke with about the project who are incarcerated or who were incarcerated, it was a really humanizing experience. And it was hard, it was really challenging.

And it’s not easy to humanize everybody, you know? But in talking with all of these people, they really made me see that we are all more connected than I think that we like to think, particularly to this ecosystem of incarceration. I think it’s easy to discard people or write people off who have been incarcerated or are incarcerated.

Through this experience of this multi-year journey of talking with a lot of different people and researching and spending a lot of time with people who are incarcerated, it has really helped me to develop more empathy and a more humanizing sense of justice and mercy.

Without giving too much away about what the film is, I’m curious to know, is this film going to sort of help us empathize and understand the perspective of the life of a prison warden or is it meant to capture the emotion and empathy, to the prisoners themselves?

Can you tell us about your organization, Pens to Pictures?

Through my research, I developed a passion for advocating for the humanity of people who are incarcerated, stories of people who are incarcerated. Through volunteering on one of the clemency cases I volunteered on, I was spending a lot of time talking with different women incarcerated in a Dayton maximum security prison. I’ve been a film professor for over a decade, helping people tell their stories, but when I was talking with the different women who were incarcerated in Dayton, I looked around and I realized that a lot of their stories would never leave prison walls. And so I just kind of said to myself “Well my ability to help people tell their stories shouldn’t be confined to the privileged walls of a college classroom”.

I just had this idea to condense the screenwriting, directing production courses that I’ve taught over the years into a one-year curriculum where I worked with women who are incarcerated and taught them screenwriting, directing, production basics and helped them write their own original scripts and connect them to local community artists so they can make their own original short films, from script to screen. They did it and they’re great and we screened them around the country. Now all the women in the inaugural group of Pens to Pictures are out and have continued to screen the film around the country.

Can you tell us a little bit about Bernadine Williams (Alfre Woodard)? Who is she and what we can expect to see from her character?

She’s a woman who builds a career having to emotionally detach and cut off a part of herself that makes her human in order to do her job. I think that prisons are a very dehumanizing space and in order to exist in one, work in one, you have to yourself internalize that kind of dehumanization. And so we enter the story with Bernadine in that place, of having done that for many years and so what we’ll see in this character, in Alfre’s brilliant performance is a woman who is really struggling with that and she’s very emotionally contained because she has to be, in order to do her job.

But what we’ll see is Alfre’s very nuanced contained ways that she shows this character on the cusp of a breaking point, in ways that are not melodramatic, in ways that are not over the top, which I think is what we tend to expect from prison, American prison dramas. And so I think that that’s really part of the brilliance of Alfre’s performance, that she says so much without verbalizing a thing.

She’s amazing. Alfre Woodard in this film gives us a master class of acting, she is brilliant.

What are your goals with feature films? Do you wish to tell more stories about prison inmates and sort of follow along with the social justice work that you’re currently involved in?

Oftentimes when we do have a Black female protagonist for instance in films that her narrative is solely defined by her race and gender. And so what I’m really excited about in Clemency and in future films that I make is that this is a character who is, yes, a Black woman but her narrative is not solely defined by her race and gender. She has a full, complicated, humanizing story that is at the forefront of the film and we are not whitewashing her identity at all but we are saying that she is a composite of many human pieces.

And we really get to let her stand in that, in this film and follow her and be with her and see her, really see her. So I’m excited to that and I hope to do more of that, across subject matters and genres.

We don’t see these stories that often, and I think the work you’re doing is very important, so thank you for that.

Thank you so much. Thank you for your work and thank you for Black Girl Nerds and supporting and affirming black women and girls, particularly Black female artists, so much appreciated.

The Clemency world premiere is Sunday, January 27th at 6:00 pm at the Library Center Theatre in Park City.

The Sundance Film Festival runs Jan 24th – Feb 3rd. Click here for all of our coverage updates during the festival.