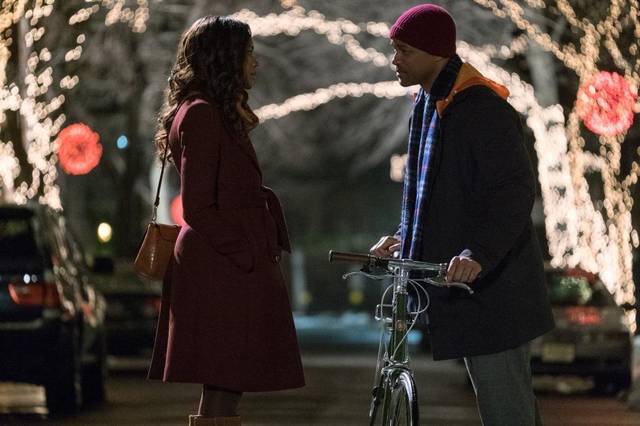 There is a gorgeous, existential tearjerker buried somewhere in this ill-conceived holiday offering, but even the combined talents of several well-regarded Hollywood actors couldn’t wrench it free. In fact, Collateral Beauty would have been twice as good with about one-third of the actors and a complete revamp of the premise.

I like to go into films as fresh as I can; the less I know about it, the better I am at experiencing it authentically. I initially hoped this film would be a magical realistic romp about the power of love in the face of grief. However, as the story unfolded, I was frankly aghast. I wasn’t thrown off by the premise; I was perplexed by the tone director David Frankel had taken.

This is a Black Mirror episode masquerading as an ABC Family movie.

Collateral Beauty begins with charismatic, optimistic, and romantic advertisement executive, Howard Inlet (Will Smith) addressing his employees at an office gathering. The movie then wastes no time moving us forward a few scant years, after his young daughter has passed away. In the same office, he spends his days setting up and knocking down elaborate, colorful domino-scapes instead of running the company.

A lack of Just For Men hair dye and adequate makeup transforms Smith’s Howard into a morose, haggard, and broken man. He refuses to communicate with anyone, including his management team, Simon (Michael Peña) and Claire (Kate Winslet), led by his junior partner, Whit (Edward Norton). Whit holds a 40 percent share of the company to Howard’s 60 percent because he lost all of his money in a divorce that is mentioned every time he’s onscreen.

Whit has grown impatient with Howard’s grief, which is costing the company clients who will only do business with Howard for some reason. Whit calls a whisper meeting with Claire and Simon and insists that drastic measures be taken to remove Howard from his position.

There is some cursory exposition about how they’ve tried more thoughtful interventions in the past, but when we meet these characters in the opening minutes of the film, they are plotting against a “friend” who has understandably lost his will to live. It gets even worse as it is revealed throughout the story that Howard has been nothing but kind and generous to them, and they recognize that.

Instead of coming up with an undeniably kick-ass advertising package or — let’s say, implementing a discount deal to keep Howard’s clients happy, Whit hires a private investigator to dig up dirt on Howard in an effort to have him deemed incompetent. The investigator steals Howard’s mail and reports back that Howard has sent angry letters to the concepts of love, death, and time. Unfortunately for them, this is not the smoking gun they need.

Serendipity steps in by way of a charming actress named Amy (Keira Knightley) visiting the office for a commercial casting call. Whit meets her, then follows her to a playhouse where she introduces him to two other actors, Brigitte (Helen Mirren) and Raffi (Jacob Latimore). After a few more occurrences as convenient as the three actors he just met, Whit gets the idea to hire them to be the avatars of Love, Death, and Time respectively and ambush Howard on streets, in parks, and on subways.

The central issue of Collateral Beauty is similar to another big budget film recently released. The main characters do something unbelievably cruel and twisted, but the filmmakers want the viewing audience to think them whimsical and clever.

While Howard spends much of the movie not eating, not talking, and indulging a hankering for late-night bike rides into oncoming traffic, the viewer is asked to find the romantic subplot between the ‘lovable’ rapscallion Whit and passionate actress Amy endearing instead of nauseating.

The story of Whit, Claire, and Simon’s ruse as well as scenes from their own lives, take up the lion’s share of the narrative, while the far superior tale is being told between Howard and Madeleine (Naomie Harris), a grief counselor who runs a support group.

Smith and Harris are outstanding. I shed a few tears during a pivotal scene toward the end primarily due to the strength of their performances. Additionally, some of the film’s best writing and acting came from the few support group scenes. I would have preferred to watch a film focused on this part of the story interspersed with the magical realism elements I was anticipating.

Despite this more emotional side being the saving grace of the film, it faltered a bit when it paused to explain the meaning of “Collateral Beauty” … I’m actually still not sure exactly what it means. Too bad, I liked the title and was intrigued about what the concept could be.

All in all, there are some fine moments, solid performances, and interesting ideas but ultimately this film is unsatisfying at best and appalling at worst.