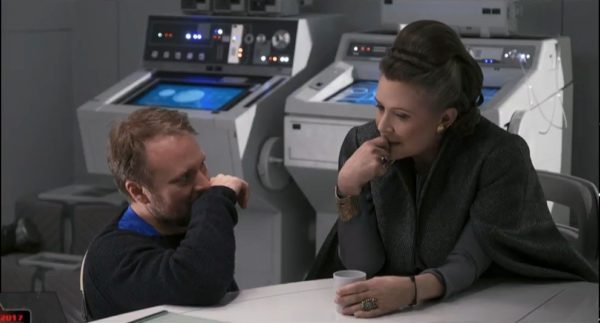 In the latest addition to their coverage of The Last Jedi, Entertainment Weekly focuses on Leia and the indelible mark Carrie Fisher made on this films and the actors.

After the events of The Force Awakens, Leia is left reeling from death of Han Solo at the hand of their son. Light years away, she felt his death and undoubtedly, the loss of Ben, now fully Kylo Ren, to the dark side. Though she knows where her brother is now, it doesn’t seem likely he’s ready to cross the universe to be there for her. To find insight into Leia and how she would handle this grave situation, director Rian Johnson turned to the expert on all things Leia, Carrie Fisher.

Leia’s strength has always been her resilience. The storm can rage and Leia will be the one left standing. Having lost her planet and family to destruction, death, and estrangement, she continues to hold the resistance and everyone around her together. At her side is resistance pilot, Poe Dameron. Of their relationship, Isaac said, “Poe is in some ways a surrogate son for Leia.” Isaac described navigating from being one of many pilots to a leader in the resistance as his arc in the film. Seeing his potential, Leia is helping him on that journey. Both twins, Luke and Leia, act as mentors in The Last Jedi. It comes as no surprise that Leia is the more willing of the two.

The universe is left to deal with the destruction of the Hosnian system and the Galactic Senate at the hands of the First Order. The resistance also has to contend with conflict from within. Vice Admiral Holdo, played by Laura Dern, will have some part in that. On the state of the resistance, Johnson said “the heat is immediately turned up on the Resistance. Everybody is put in a pressure cooker right away, and relationships crack and strain under that pressure. That was really interesting to me, the notion of putting this small army under a lot of external pressure and showing some of the results within the Resistance itself.”

While there were rumors that Leia would be brought back by the same CGI technology used in Rogue One, it was reported earlier this summer that she would not be returning for the next installment. Though The Last Jedi completed filming prior to Carrie’s death and was not edited to reflect it, Johnson promises a fitting story for this beloved character.

Finally, the article ends with this lovely story from Oscar Isaac about Carrie Fisher:

“One of my favorite things that would happen from time to time on set would be when Carrie would sing old songs,” he says. “Whenever that would happen I would offer her my hand and we would waltz around the set – on a starship, in a Rebel base, on an alien planet, and she would sing and we would dance. So surreal and beautiful to think about now. For all of her delicious, wicked humor and fiery energy she also had such sweet grace. I miss her dearly.”

Visit Entertainment Weekly to read the full article. For my article on additional EW coverage of The Last Jedi, visit here.