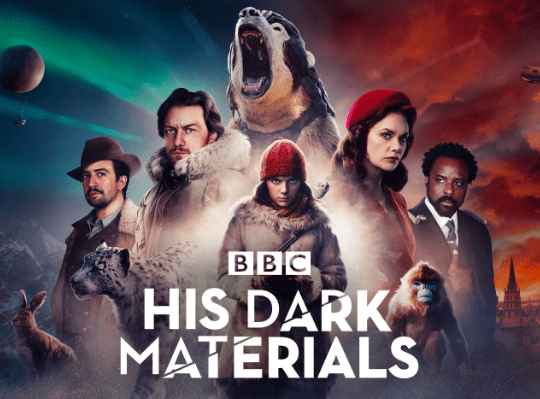 Adapting Philip Pullman’s award-winning trilogy of the same name, which is considered a modern masterpiece of imaginative fiction, the first season follows Lyra, a seemingly ordinary but brave young woman from another world.

Her search for a kidnapped friend uncovers a sinister plot involving stolen children, and becomes a quest to understand a mysterious phenomenon called Dust. As she journeys through the worlds, including our own, Lyra meets Will, a determined and courageous boy. Together, they encounter extraordinary beings and dangerous secrets, with the fate of both the living — and the dead — in their hands.

In the second season of His Dark Materials, Lord Asriel (James McAvoy) has opened a bridge to a new world, and, distraught over the death of her best friend, Lyra (Dafne Keen) follows Asriel into the unknown. In a strange and mysterious abandoned city she meets Will (Amir Wilson), a boy from our world who is also running from a troubled past. Lyra and Will learn their destinies are tied to reuniting Will with his father but find their path is constantly thwarted as a war begins to brew around them. Meanwhile, Mrs. Coulter (Ruth Wilson) searches for Lyra, determined to bring her home by any means necessary.

Season 2 returns this Fall and season 1 is currently available on HBO and to stream on HBO Max.

Waiting for ‘The New Mutants’ is About to Get Really Old