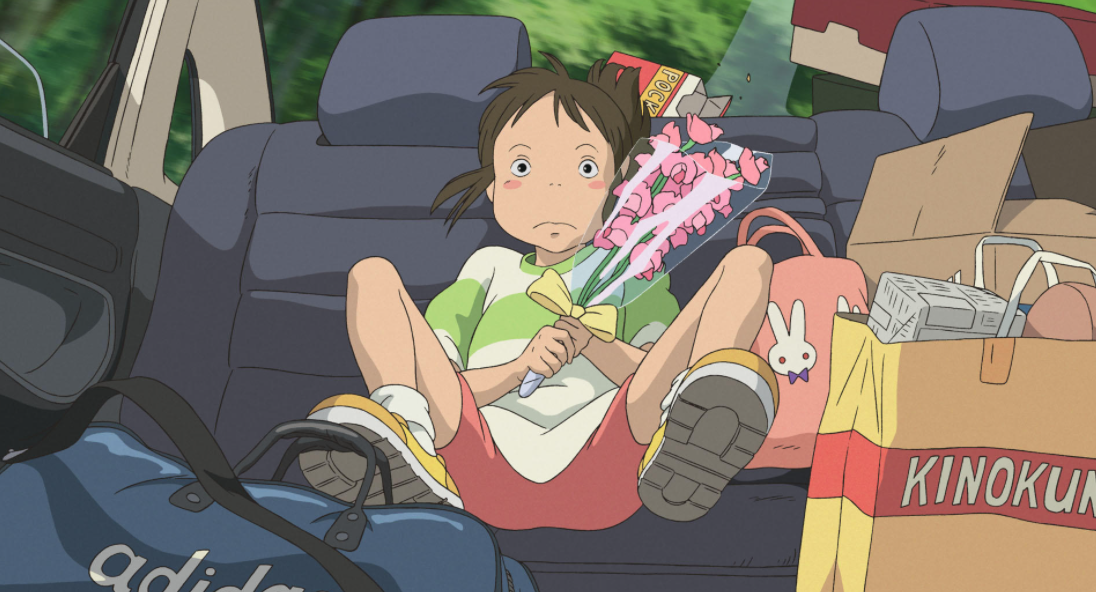 Following the groundbreaking announcement from The New York Times that legendary Studio Ghibli animator and director Hayao Miyazaki is coming out of retirement for one final film, fans have been rejoicing. So, when Comic-Con: Special Edition put the 20th-anniversary screening of Oscar-winning Spirited Away on the schedule, crowds took little time to pack the long line to get in.

The 2001 film focuses on 10-year-old protagonist Chihiro and her parents who wander into what they assume to be an abandoned theme park. However, things take a sudden turn when Chihiro’s parents are turned into pigs and a handsome stranger named Haku tells her that they are in fact in a bath house for the spirits. In order to get her parents turned back into humans and leave the bath house, Chihiro must embark on a magical adventure to break the spell and, in doing so, help new friends.

Hosted by Hot Topic, the screening was supposed to include trivia and a look at the new Ghibli holiday collection, but seating the very eager audience took more time than expected. There wasn’t time for trivia, but there was still time for prizes.

Viewers were given My Neighbor Totoro postcards advertising the final film in the Ghibli Fest lineup, and some cards had a surprise on the back. Select postcards had a silver star sticker, which indicated that they’d won a prize to claim at the end of the screening. As many can attest, Hot Topic usually has the best Ghibli merchandise.

One coveted prize included a Studio Ghibli Kiki’s Delivery Service Jiji cage music box. The Jiji Cage Music Box reflects a scene in the movie in which the black cat Jiji is instructed to sit completely still as he pretends to be an identical cat toy until Kiki can replace him with the real toy.

Many fans groaned when they didn’t see the sparkling silver star on their postcard. Fortunately for them, there are few worries that a screening of Spirited Away can’t relieve. It was a time for audiences to laugh, cry, and give collective reactions as a community that adores Miyazaki’s work.

Studio Ghibli was founded in 1985 by Miyazaki, the late Isao Takahata (The Tale of the Princess Kaguya) and producer Toshio Suzuki (The Wind Rises). They’ve also been graced by the talents of Ghibli musical composer Joe Hisaishi for years.

Miyazaki’s upcoming film is based on the 1937 novel called How Do You Live? by Yoshino Genzaburo. The book is one of the animator’s childhood favorites. It follows a 15-year-old boy who lives in Tokyo whose father has gone missing. However, knowing Miyazaki, this male protagonist may be a girl in the movie, as most of his main characters are witty, strong-willed young women.

The film is meant to be a gift to Miyazaki’s grandson and something that can be seen by his family for generations after he has passed away. It’s also part of the animator’s usual style of getting bored of retired life and wanting to start on a new project.

With the continual Ghibli Fest and the new Academy Museum Ghibli exhibit in Los Angeles, North American interest in Studio Ghibli is booming. The 2021 Ghibli Fest is almost at an end with My Neighbor Totoro finishing the festival in theaters December 5–9. The other films featured in this year’s fest include Spirited Away, Howl’s Moving Castle, and Castle in the Sky, which celebrated its 35th anniversary this year.

The Ghibli exhibit at the Academy Museum invites visitors to take in the mystical art of the world-renowned studio and see their favorite characters. The exhibit debuted on September 30, 2021, with over 300 storyboards, backgrounds, and concept images predominantly from the actual Studio Ghibli Tokyo headquarters. It has images from My Neighbor Totoro, Princess Mononoke, Spirited Away, and more on display.

While each Studio Ghibli event and exhibit is exciting, for most fans, nothing will ever top Miyazaki’s 2009 in-person panel at San Diego Comic-Con with his longtime friend John Lasseter (Pixar). After years of declining invitations for conventions, award shows, and most interviews, it would seem that 2009’s panel was a once-in-a-lifetime experience.

However, some may test their luck by visiting the Ghibli Museum in Mitaka, Japan, for a possible Miyazaki sighting. Even without running into the acclaimed animator, a trip to the museum is something that’s on every Ghibli fan’s list. It’s a place of wonder, with the 80-seat museum theater showing exclusive animated shorts including Mei and the Baby Cat Bus, the sequel to My Neighbor Totoro.

When the regular programming for San Diego Comic-Con hopefully returns in 2022, there’s likely to be more exciting Ghibli content to enjoy. While it’s a long shot, it would be one unforgettable treat for fans to see Miyazaki attend the convention once again and talk about his new film.

In the meantime, people can continue to enjoy Ghibli films on HBO Max or through the Ghibli fest.