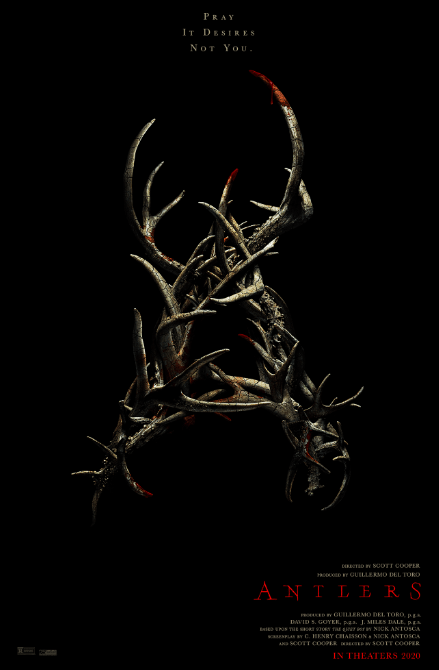 One of many movies that had to delay its release is Guillermo del Toro’s supernatural horror film, Antlers. The film is about a creature that has been terrorizing an isolated town in Oregon, leaving blood and carnage in its wake. The film is directed by acclaimed filmmaker Scott Cooper (Crazy Heart, Hostiles) and produced by horror maestro Guillermo del Toro (The Shape of Water). The Comic-Con@Home panel was moderated by Collider’s editor-in-chief Steve Weintraub and featured Scott Cooper and Guillermo del Toro. The filmmakers teased what we could expect from the upcoming film and how they designed the picture’s horrifying creature, the wendigo.

I first heard of a wendigo in 2005 in Season 1, Episode 2 of Supernatural. Of course, I researched it as soon as the episode was over to learn the history behind it. The excitement over Antlers stems from knowing the lore and understanding how great del Toro is at bringing creatures to life.

“The wendigo has very specific cues you need to follow,” said del Toro. “The way its described, you have to follow those pre-sets. So, the antlers, for example, are a must.”

We all know del Toro takes pride in his monsters. He wouldn’t put his name on something that wasn’t spectacular.

“We have to remember we’re not creating a monster. We’re creating a god,” del Toro stated. He continued with, “All the designs need to have elements that are completely unnatural. That are almost surreal or abstract. We cannot have a monster. We have to see him and say it looks ancient, powerful, and one with nature.”

Del Toro has won Oscars because of his creatures and a lasting legacy with films like Pan’s Labyrinth and The Shape of Water. I have a feeling Antlers will give us the monster we won’t soon forget.

The film is, at its core, more than a horror movie. There are messages that Cooper and del Toro hope audiences will understand. The themes and messages are derived from the Native American belief in the wendigo and how it came to be.

“While I wanted it to be really quite horrific and terrifying,” Cooper said, “and it is, I wanted us to really feel what it is to be an American today. To show the world as it really is.”

Through the trailer, we can see this small town is going through a lot. A good chunk of that stems from the family issues we see disrupting the life of a young boy, played by Jeremy T. Thomas. While family is one theme in the film, the wendigo plays a role by representing nature’s form of setting things right. Cooper explained, “The wendigo we know is this murderous spirit. It’s summoned by nature to seek vengeance on a callous mankind that has abused it.” He then goes on to explain the abuse that has been occurring in our lives whether we know it or not. “It’s clear that we’re abusing Mother Earth. We’re abusing Native Americans. We have since we first came to the shores of America. Then also abusing drugs and the opioid crisis. So that just kind of hovers underneath the surface because the wendigo represents greed and colonialism.”

This is Cooper’s first dive into the supernatural, but with del Toro at his side, it could be a winner. As a fan of horror, Cooper didn’t mind taking the risk. “I think risk is one of the great pleasures of making art. I think horror films are for people who were kind of interested in the darkness inside themselves but don’t want to face it or confront it directly. I think it can provide an environment for people to escape.”

I myself love escaping into a good horror flick. In some ways, del Toro and I are on the same page when it comes to film. “The strange combination is the three filmmakers that influenced me the most,” he said. “Disney, Hitchcock, and Buñuel. The three of them intersect, somehow.” Disney and Hitchcock are how I would describe my own movie habits as well.

“First of all,” said Cooper, “I wouldn’t have made the film if Guillermo wasn’t producing it. I said to him, my goals for this film is for it to be disquieting, for it to be tense and human at its center, but also terrifying.” There’s no better goal for a horror film.

While we wait for Antlers to make its debut, here are some recommendations to watch during quarantine to keep you satiated. “The film that I would seek out to watch over and over and over, would be [Coppola’s] film The Conversation,” said Cooper. Del Toro gave his opinion by stating, “Creature from the Black Lagoon, or Frankenstein, or Road Warrior…Catch Me If You Can. You know they, they’re in constant rotation. And Blade Runner. I see at least fragments of 10 movies every day and three full movies.”