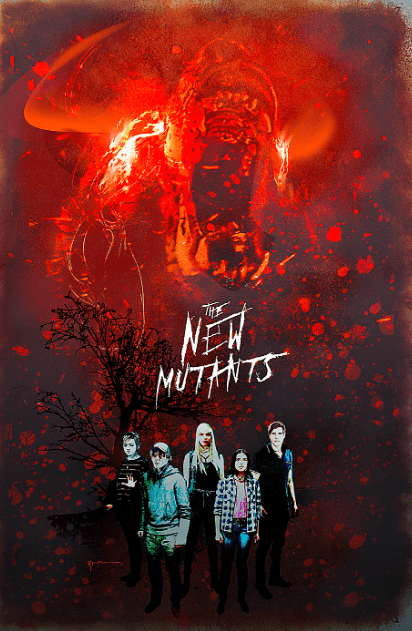 Comic-Con@Home is here! Of course, the first thing on my radar for this digital experience was The New Mutants.

Twentieth Century Studios and Marvel Entertainment are giving us an original horror/thriller — the first of its kind. The film is set in an isolated hospital where a group of young mutants is being held for psychiatric monitoring. Strange and horrifying things start to happen. New mutant abilities and friendships are formed and tested. The goal: to make it out alive.

First things first. We have all seen the slashing of dates that has happened due to the horror movie we all find ourselves in called 2020 and Coronavirus. Fingers crossed, the new in-theater release date for The New Mutants is August 28, 2020. The cast is just as ready for the film to come out as fans are.

What we learned from this panel is that horror was the prime intent of this film. Scary. Dark. Menacing. From the trailer to the poster art, there is a clear theme throughout. The film looks to be similar in tone to Stranger Things, Nightmare on Elm Street, and Scary Stories to Tell in the Dark, while still giving us the large dose of mutants and X-Men that we want. If you didn’t know, New Mutants comes from the successful comic book series that are spinoffs of the X-Men franchise. The characters were big through the ’80s and early ’90s in their own feature titles. They were then relaunched as X-Force. (Pardon the excitement at the idea of an X-Force film. I digress.) Anyhoo, the graphic novels themselves have a dark tone and are aided by a more avant-garde art style. The New Mutants is depicted with themes of teenage angst, growing pains, and mysticism. All conducive to a successful horror film, we hope.

The Demon Bear Saga is the story that The New Mutants will be telling. Special guest, comic book artist Bill Sienkiewicz, briefly joined the conversation to talk about his introduction of the Demon Bear character in the ’80s. Sienkiewicz brought surrealism and horror to the New Mutants comics, and his character concepts are a driving influence and are reflected in the film. The film is an adaptation of three issues of Demon Bear. Part of the villainy of Demon Bear is that it haunts dreams and has terrifyingly strong strength, mauling its victims to death. If demon bears don’t scare us, the psych hospital will. Amidst cemetery headstones, death, and bad dreams The New Mutants gives us escape-room vibes in the psychiatric hospital where our mutant friends find themselves living. There are teeth creatures, for lack of a better term, that are a cross between the creatures from the ’80s horror film The Deadly Spawn and Leviathans from Supernatural. Arms and faces are reaching out from the walls. As Boone phrased it, “It’s sort of a mix of dark fantasy and horror with superhero comics and I’ve never really seen anything like that before.”

Blu was very candid about her love for horror films. “I feel like I’ve seen so many horror films that I run out of horror films to watch, unfortunately, and you know whenever I feel like watching one I’m like, I’ve seen it.” While scenes from the movie didn’t scare or creep her out too much, the filming process made a mark. “The opening of the film was creepy. And being barefoot and throwing myself down a hill, and rolling down it, and being stuck in a tree, and things like that, and all in the middle of the night. The night shoots in the woods, that was pretty scary.”

Gaining some insight into the film was awesome, but the best part was being able to see the opening sequence attached to an extended trailer. Take a look! The opening starts with high adrenaline, fire, snowstorms, terror, and death. We are all super excited to see The New Mutants. Keep your toes, fingers, legs, and arms crossed that the August 28, 2020 release date stays put.

If you missed the panel, you can catch it all on YouTube here.