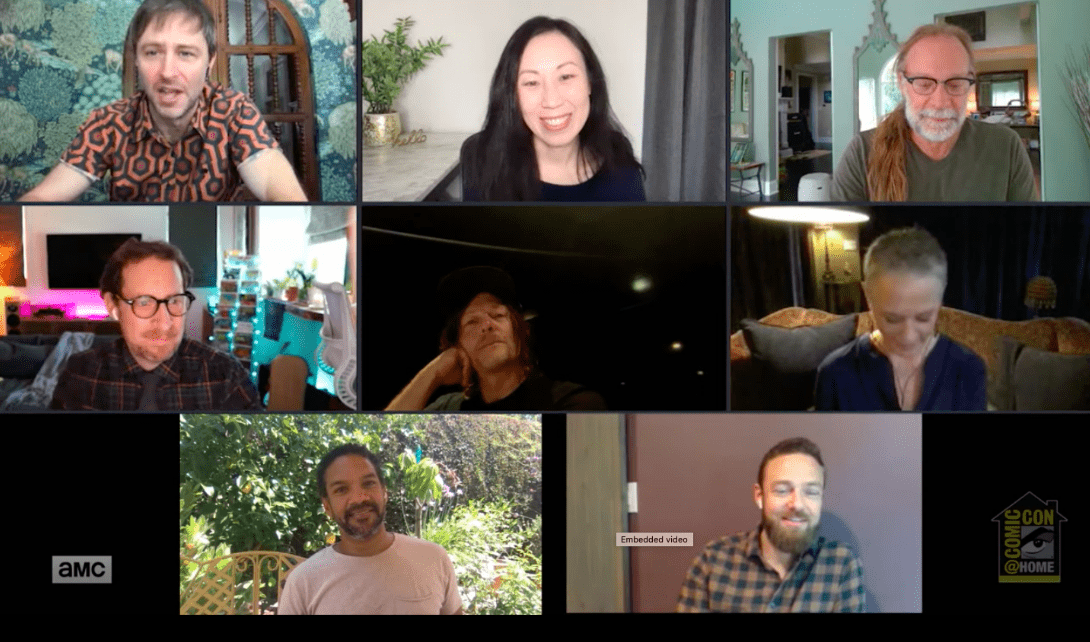 I had almost given up on The Walking Dead. After Season 9 (let’s be honest, Season 8), I just wasn’t feeling it anymore. Season 10 came along, and while it took me a minute to catch up, I’m back to being invested in these characters.

I noticed a good handful of new people that tickled my diversity and inclusion fancy. Executive producer Angela Kang said it best: “The message is that there’s no one type of person that makes the ideal survivor. Everybody has to come together. The show has to reflect the people that are in this country that are fighting to survive.” She continued, “I think we try to ensure it by continually hiring amazing actors from all races, sexual orientations, and abilities, looking at diversity across all axes. We try to do that behind the scenes on the camera side, too.”

So, here we are, the Comic-Con@Home panel for The Walking Dead, and we’re thrilled to see and hear from the panelists. Fair warning, there are some spoilers ahead if you haven’t caught up.

Some fun discussions and reveals were made during this panel. Due to coronavirus, there was a halt on the release of the Season 10 finale titled, “A Certain Doom.” Thanks to a fun Comic-Con reveal, we now know that Episode 16 will air as a standalone on October 4. It was then revealed that Season 10 would be extended with 6 bonus episodes to air in early 2021. Not sure yet when we will get to see Season 11, but the writers are hard at work. Chris also informed us that The Walking Dead finale will be directly followed by the series premiere of The Walking Dead World Beyond and then an all-new episode of Talking Dead. Scott Gimple also shared, “We’re working on things where we are looking at past characters. Maybe a whole series. We’re looking at days where we can take a peek at, maybe not pre-apocalypse, but early in the apocalypse. We’re looking at both. So get excited about that.” A lot of things are happening in The Walking Dead Universe, so get ready.

The panel graced us with the opening minutes of Season 10, Episode 16, which highlights the beginning of the final battle against Beta and The Whisperers. Make sure to watch in the first few minutes of the panel. Our gut reaction was, Holy crap, that’s a lot of walkers. The opening of the episode with Gabriel and what the panel touched on was the relationships that have cemented the foundation of The Walking Dead. Forget about the walkers. Forget about The Whisperers. What we will see at the end of Season 10 is the character dynamics and the relationships for better or worse that have been established.

Beta is now leading the horde and The Whisperers. The chaos that this change in leadership could cause could be detrimental. Angela explained, “Beta is used to being the Beta, and Alpha would tell them what to do. And that worked for him. We found out that he was a country music star, and he loves the roar of the crowd. Lived off of that.”

We start to see a change in the walkers or of Beta’s perception of the walkers. It becomes clear to the audience that he is not at all any kind of stable person and Alpha has kept him in check. With her gone, all hell is about to break loose, as we can see in the previews of Episode 16.

Angela continued, “He had to find some other voice to tell him what he’s got to do now that he’s a Beta-Alpha hybrid.” As Chris pointed out, “The horde is now like the fans that would have been at his concerts.” Angela agrees and adds, “He and Alpha talked about liking the walkers and the sounds of the walkers. He’s soothed by it. So that’s the closest thing that he has to a screaming fan base. It follows him around and also kind of guides him.” An argument can be made that The Whisperers are one of the more villainous people that the group has come up against. Dare we say, worse than Neegan.

Speaking of Neegan, he has become Mr. Popular this season in his arc for redemption. He formed a partnership with Carol, doing her bidding. Episode 15 gave us a glimpse of the potential relationship between him and Daryl, as Neegan becomes a potential ally. We can only guess what his relationship will be like with Maggie when she returns. We can all assume she will want to kill him right off the bat. Last time Maggie saw Neegan, he was locked up for what she thought would be forever. Her last major memory of Neegan is him killing her husband. Tragic to remember, but look how far he’s come. We learn from the trailer that Carol has been in communication with Maggie, but we doubt she said anything about Neegan. Jeffrey suggested that perhaps the way to Maggie’s friendship is through the kids. “Neegan definitely has a soft spot for the younger generation. We’ve seen that numerous times. I think he has a relationship with young kids, and it’s very honest. I don’t think he would shy away from letting [Baby Hershel] know who he is and try to work through it.”

Daryl has a lot going on this season apart from the war. He and Carol are on the rocks for one. He has trust issues with her while she’s trying to make amends. Angela confirms that it will be a challenge for them both. “As with any really long, deep relationship with anybody in people’s lives, it can be complicated because they can be real with each other in ways that not everybody can. But that means that the hurts run deeper. You kind of start from that point and then they’ve got a long road to travel.” He has stepped up with Judith and RJ in Michonne’s absence. As Norman put it, “So he’s trying to play daddy and do everything correctly there. And then also watching this friend have a breakdown and trying to be there to support her and keep this group together while we’re being attacked.” There’s no doubt, Daryl will be instrumental in the upcoming episode.

Director Greg Nicotero laid it out for us on how these relationships will intertwine with the final battle. “We know that our people know how to move within the herd. We’ve seen it since Season 1, Episode 2, when they put the walker guts on themselves, but they’ve never had to maneuver within a herd that has human beings in it as well. That sort of ups the stakes quite a bit.”

There are new relationships brewing, like Eugene and Stephanie. We have a new character, Princess, played by Paola Lazaro, who may have some tricks to share with the rest of the group. We also can’t wait to see Princess and Neegan’s relationship because, as explained by Paola, “Both of our characters are very wild, very extroverted, very wordy. So I wonder who would win that match in words.” We can’t wait to find out.

BGN Interview: Khary Payton is All About the Robots and ‘Teen Titans Go! To the Movies’