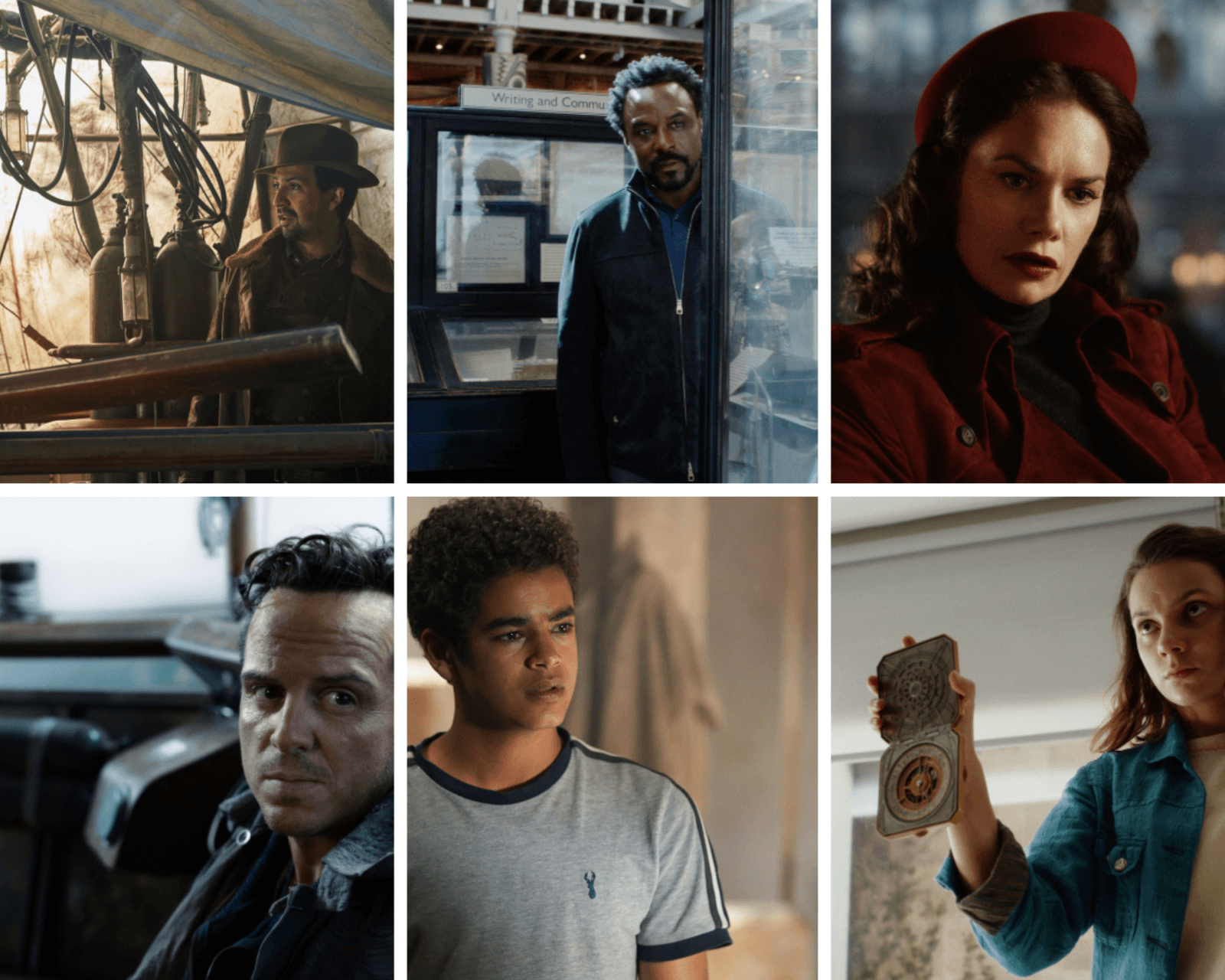 It was a treat for BGN to attend the virtual His Dark Materials panel and Q&A session during Comic-Con@Home this Thursday. Adapting Philip Pullman’s award-winning trilogy of the same name, which is considered a modern masterpiece of imaginative fiction, HBO/BBC’s His Dark Materials concluded its debut season in December and will premiere the second season this Fall.

There was two epic reveals that still have audiences reeling. First, fans from all over the world were given an exciting surprise when the panel dropped the Season 2 trailer for viewers to enjoy from the comfort of their homes and the coziness of their jammies.

The trailer was an amazing sensory adventure as attendees were time-warped between worlds while also receiving some exciting sneak peeks into new developments of the season.

The trailer quickly reveals that Lyra (Dafne Keen) meets Will (Amir Wilson) are in the other world. It’s also revealed that there is a special knife with the ability to “cut between worlds,” which sounds pretty intense and vital to the upcoming season’s plot.

Fans are also shown witches gathering to involve themselves, presumably to assist in the protection of Lyra. Lee (Lin-Manuel Miranda) is seen desperately trying to find Lyra after disappeared into the other world and it would seem — similarly to last season —Mrs. Coulter (Ruth Wilson) is also on the search for Lyra. The trailer has instantly become a hit that is leaving audiences wanting more.

The second exciting reveal was from Andrew Scott (John Parry), who announced that John’s daemon is voiced by English actress, writer, and producer, Phoebe Mary Waller-Bridge. Bridge is known for her roles in the BBC tragicomedy series Fleabag and the series Crashing.

I addition to big reveals, viewers were able to listen to the panelists share their cast experiences with laughs, inside jokes, and breakdowns of the show that were unforgettable. Every cast member had something to share, and it was pretty brilliant.

Jack Thorne on Being the Main Writer in The Trenches

Hunt began by asking Thorne what it was like adapting Pullman’s book series into a television series, particularly with season 2.

Thorne explained, “It was the hardest job of my life, but an honor. Phillip reached out to everyone and was appreciative.”

When asked if there’s any particular scene from the book that he was especially excited to bring to life on film, Thorne gave a very subtle description, describing it as “heartbreaking” and suggesting it may include death.

He went on to describe the show as being a “poem about trust, trusting people again —like the writing process and trusting faces.”

He was referring to the ability of actors being able to tell a story using only non-verbal cues to convey the depth of specific moments, “telling stories with their eyes” and as Hunt added, “their beautiful faces.”

Dafne Talks about Lyra in Season 2

When asked about what Lyra’s state of mind is like in the new season, Keen explained that after losing her best and learning that her uncle is her father, Lyra “can trust no one and nothing, but Will helps her.”

Keen also shared that she’s excited that her father, English actor, Will Keen will be in season two and that his character hasn’t killed anyone, which is perhaps a hint to fans that he will not be playing an antagonist. Only time will tell.

Amir Talks Will in Season 2

Hunt asked Wilson what it felt like to be featured more in season 2.

“Will wasn’t in book one, but was in season 1,” he explained. He felt pressure to appease fans but make it (the character) his own — “do my own thing,” as he phrased it. Later on, fans playfully joked that Wilson, “did his thing well.”

Will and Dafne Bonding for Season 2

Wilson explained that he has to finish casting in a different production prior to join the case, and thus, had less time to bond with Keen prior to filming their first scenes together.

However, the two seem to have become fast friends. According to Wilson, he and Dafne went out together to bond and went on walks to the park while bonding over their mutual hate for school. It was very cute and refreshing to see the two giggling as they recalled getting to know each other more.

Later, when asked what kind of strange habits that some cast members had, Wilson explained that on set, he always carried his air pods. So, he convinced Dafne to watch Top Boy with him quite often.

Ariyon Bakare (Lord Boreal) described Lord Boreal as always wanting to be on top and willing to step on as many toes as necessary.

It was interesting for Bakare, as he shared that he had never played a villain prior to this role. However, he once told by a director that he would make an amazing villain if he doesn’t change the expression on his face to give anything away about his emotions.

He took that feedback and ran with it when it came to his audition for Lord Bordeal, and it worked rather successfully in landing him the part.

Hunt asked Ariyon Bakare (Lord Boreal) to share some of the funny requests and reactions that he’s received from fans.

Bakare spilled the tea that fans have been slipping into his DM’s with some very strange messages. He didn’t go into detail, so that just leaves viewers to use their own imaginations.

He did mention more typical responses, like people being surprised how young he is and wondering how he can portray a character that is so cold.

A fan even had a special request for Bakare to record a birthday message in “Boreal style,” which most people can only image means a very cruel birthday message. The panel asked Bakare if he could give an example of what it would sound like, but he was not eager to share.

The cast laughed as they recalled a fun moment when Bakare would mimic the popular Loreal brand commercial catch phrase with his character’s name, saying, “Boreal, because you’re worth it.”

There was resounding laughter from all panelist as they reminisced about the hilarity that ensued.

Andrew Scott on Joining the Cast for Season 2

Upon joining the cast in season 2, Scott found that adjusting to a high-level fantasy world was really exciting but a little intimidating. He was excited to work with incredible actors, especially Miranda, who he had the most scenes with.

He also mentioned that he has a good relationship with Pheobe Waller Bridge, who plays his daemon.

Miranda mentioned that a funny bonding moment that he and Sott had was when they were filming in the hot air balloon for a long time and nerding out over their mutual love for Judge Judy, which was both funny and adorable.

By contrast, Scott introduced Miranda to a British show called Percy Pig and the panel agreed, Judge Judy and Percy Pig are the foundation of a strong friendship.

Hunt asked Wilson to describe what it’s like to portray Mrs. Coulter and if she’s more of a survivor of circumstance or a villain.

She unpacked many of the layers that the book and show have done a great job of building. She expresses the process of looking underneath the surface of her character and really analyzing the circumstances that Mrs. Coulter encountered with being a woman in a man’s world.

Wilson brought up how the show and the book gave her license to dig in and think about the horrific things Mrs. Coulter does and why she does them as well as how she became the woman that she is.

Wilson humorous finished her point by stressing the importance of Mrs. Coulter’s “relationship with herself, and her monkey.”

She concluded that with most interesting characters, “the more you dig, the more you find. Characters have layers, but also dead ends.”

Hunt was eager to ask Miranda how it felt to go from Hamilton arriving to Disney+ to taking on Comic-Con. Miranda said it was easy, as he just enjoyed watching as the world watched Hamilton and responded.

In 2005, he had his future wife bonded over their adoration for the books and read through the series together, which is almost overwhelmingly cute. It’s safe to say everyone melted when he said, “We fell in love with the world (the world in of the book series) as we were falling in love with each other.”

Not only did Miranda read the entire books series, he read all of the surrounding lore to know as many details as possible about the story. It would seem there couldn’t have been a more fitting of worthy part.

He also shared with audiences that he has learned from Keen’s perspective as a younger actor. He referred to her youthfulness as “genius, not annoying” and explained that they bonded through both speaking Spanish and their mutual love for showtunes.

During season 2, Miranda missed Keen both on and off screen, as Lee spends a great deal of the season trying to find Lyra. By virtue, they didn’t get to film many scenes together and weren’t on corresponding schedules anymore.

This panel was truly enjoyable for fans that have been eager to get a glimpse into what happens next in Lyra’s adventures. For those looking to either watch for the first time or refresh their memory in time for the new season, His Dark Materials is available for streaming on HBO Max and the BBC.