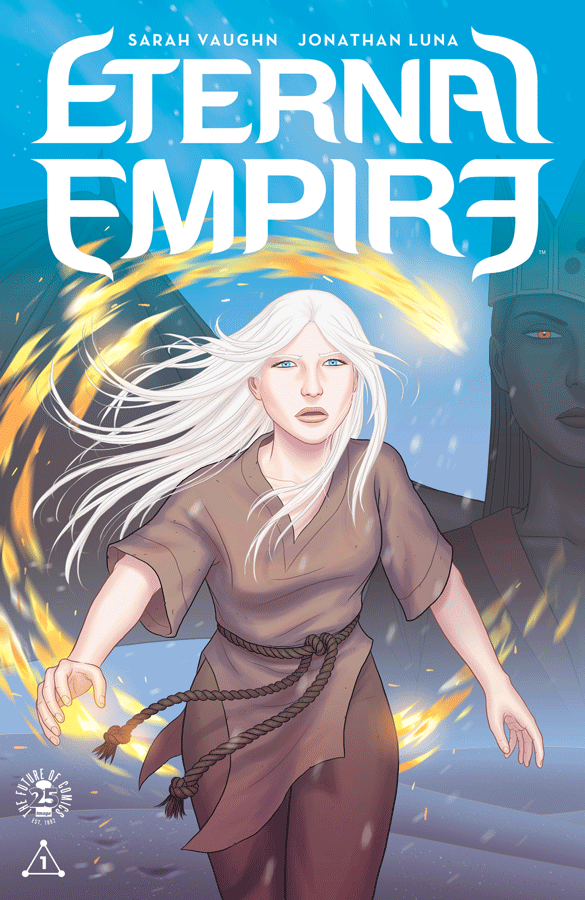 Alex+Ada collaborators, Johnathan Luna and Sarah Vaughn have teamed up again for a new Image Comics adventure. Eternal Empire takes place in a fantasy land of magic and mythical beasts. On a planet that has three suns, which figure heavily in their theology, we are introduced to this strange world through a ritual that ends in a disturbing coupling if I do say so myself.

As with any first issue, there isn’t much to say that isn’t completely spoilery. Establishing the world is key. The basic premise is that a war-torn land ‘united’ by conquest is ruled by a cruel, despotic Eternal Empress who demands not only slave labor but worship from her subjects. The narrative centers on one enslaved woman derisively called “snow hair” by a guard for her long platinum blonde do. After a night of enforced Empress worship and compulsory merriment, things get very interesting for her and the story kicks into gear.

Conveying imagery and an art style is important as well. The protagonist is markedly paler than any of the other characters, fellow captives and overseers included. While I’m sure there is an in-story reason for this, it also has the practical benefit of helping the reader separate her from the rest of the characters. While the setting is a vast departure from the world of Alex + Ada, the character design isn’t that dissimilar. Quiet establishing shots,  uncluttered panels, and emotive facial expressions help guide the reader along without any confusion.

Words are economic but not lacking weight. There are some lovely passages that are references to the three-sun religion. I am intrigued by this introduction and look forward to reading more.

Eternal Empire #1 is out today.